Poets in railcars
never think to answer
where in the world are we going?
only
why the salesman
is a dazzling back-alley twin
of every third grade
gym teacher 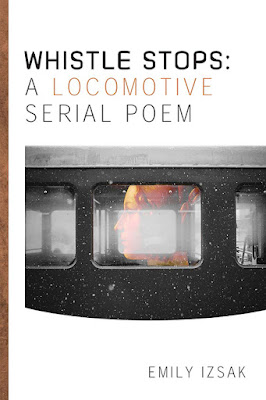 For some time now I’d been looking forward to Toronto poet Emily Izsak’s first trade poetry collection, Whistle Stops: A Locomotive Serial Poem (Winnipeg MB: Signature Editions, 2017). Whistle Stops is constructed out of an extended sequence, with a shorter sequence included as a kind of coda. The poems in the title section run from the end of August to the middle of April, utilizing notation-as-title, specifying destination and time of each trip, alternating “London” and Toronto’s “Union Station.” The specificity of her titles are reminiscent, slightly, of the day book poems of Gil McElroy’s ongoing “Julian Days,” as he too titles his poems with a precise date (via the Julian Day calendar; given so few are aware of the workings of the calendar, the specifics might be there, but the effect is obviously and deliberately softened) and composing a poem using details in such a way as to work against precise description and narrative, instead focusing on sound, shape and language. As she writes to open the poem “MAR 1ST 74 TO UNION STATION  07:35”: “Distance seeks luxury / among the cedars / offstage decoys // guide our larvae / to a pagan grasp / of self portraiture [.]” Most of the poems in the first section have the effect of short, sketched meditations, but also allow for the possibility of other formal and informal intention and invention, and even allowing for the possibility of poems constructed out of anything and everything, while still connecting to the other pieces via the open-ended structure. Each poem might exist on its own (presumably composed during the train jaunt referenced in each poem’s title), but each live in conjunction with every other poem in the collection.

My dearest A—,
As per your request, I have been including less of you in my poetry. Really just a stray pronoun here and there, or the metaphysical scent of you. But I don’t know how much longer I can keep this up. Elements of your facial structure are making their way into the pages. I haven’t used a single fuck in this collection yet. I imagine one will arrive soon.

There have been numerous books composed on trains (I’ve even done my own, more than once), and the extended travel of trains somehow lends itself well to the composition of longer works, whether long poems, sequences or suites. In so many ways, the hours of rattle and rail can’t help it. Curiously, the effect of such poems-in-transit suggest that each piece is composed in the same “place,” writing out both the samenessess and differences of a new day along the same track (much like Auggie’s photographs in the 1995 movie Smoke, or Frank O’Hara’s infamous 1964 collection, Lunch Poems). The samenessess allow for structure, but the differences, however slight, contain multitudes.