I love brown days when the green
leaves have gone back. Down to the future.
As a tree mulches itself. I could bag it away
on the curb on Thursday but I shan’t. There are
minerals and gases and the ways that everything
knows. To get to the future. Born for this funeral.
Who will put flowers on a flower’s grave?
My anxiety turning
from green to grey
to ash to vapour
to flocked, paisley
fractal, spiral, crenellated
and back to brown

And still it appears
to follow me but is my host – 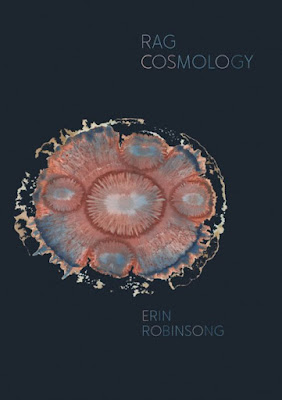 Poet and interdisciplinary artist Erin Robinsong’s first poetry collection is Rag Cosmology (Toronto ON: BookThug, 2017), a poetry collection constructed as a “pulsating meditation” that blends fragments, visual poems, performance and the lyric essay on ecology and the personal, and how they can’t help but interact. In the poem “PLACES TO INTERVENE IN A SYSTEM,” she writes: “we delivered a formal apology to the salmon / did a controversial pregnant photoshoot / in front of a nuclear reactor, all those nice curves / we made page 15 of the New York Times, ok / and delighted in the letters to the editor that said / I was ‘going to give my baby cancer’ well exactly / then got scared and moved but it was everywhere / we went like my unstable worth rolling / oblongly on pink shadows of information / glamping among facts. Friends came / and were astronomies.” There is something of the collection that exists between the book-length unit of composition and a collaged kind of catch-all, as well as elements of the text that read as though the script of a performance, set aside the more traditional poems. In many ways, the structural variety throughout the book is the glue that bonds the collection together, allowing the different elements of her explorations through poetry to interact. One might even say: the performance aspect is key. As she writes of the book in a recent interview at Open Book:

It’s a book that is really thinking about this ragged time. Rags are what we’ve got – the ecological fabric is pretty threadbare. I used to get so fixated on this in a doomful way – and still do – but more I’m thinking about what to do with these rags and holes, both in terms of acts of repair, and also as a record and a rhetorical and perceptual style. Not to push the metaphor too far – but a rag is useful. It’s also a word for sensationalist journalism, in the tabloid sense – a rag. Alien takeover and celebrity break ups are so dull in comparison to the outrageous, lascivious, too weird to be true nature of the ‘mundane’ world we actually inhabit, of violescent sea whips, semi-aggressive flower animals (reef dwellers) not to mention the way our own bodies are in constant very literal communication and exchange with the world, the cosmos, what we call ‘the environment.’

Cosmology of course refers the study of the world, the cosmos, as a whole. How the whole system fits together. My cosmology has nothing of the kind of divine geometric order of the 17th century cosmologies by people like Robert Fludd or Kepler, but it is a way that I have found to put my sense of fracturedness and majesty together, and to give theories to the communal question – what kind of intelligence are we part of? I’m enthralled by this weird, sexy, pulsating intimacy we share with the earth, and also deeply confused about what it means to be a person right now. How do we become less deadly? (to borrow Donna Haraway’s phrase)