some christmas 2016, etc; a series of holiday reports,

Another year, another round of family etcetera around these holidays (see last year's version here). Here are some rough notes on such: 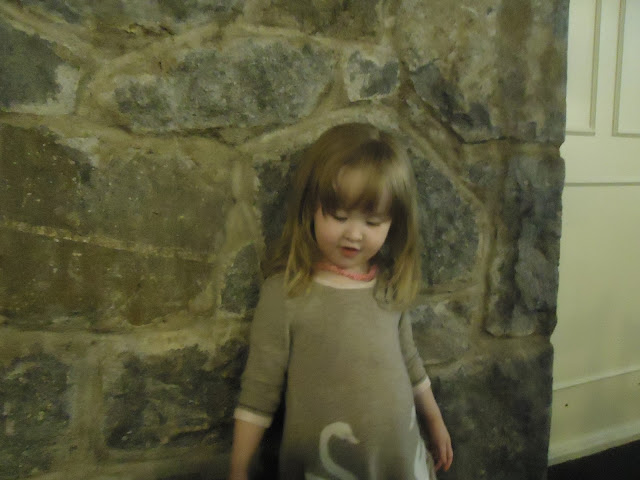 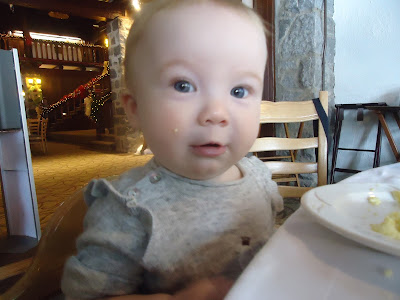 December 17-18, 2016: We did our fourth annual Montebello jaunt with father-in-law and Teri, and brother-in-law Michael and his family. Every year of such we've had another child in the mix, this year being our wee Aoife (I think the grandchildren are holding at four for a while). 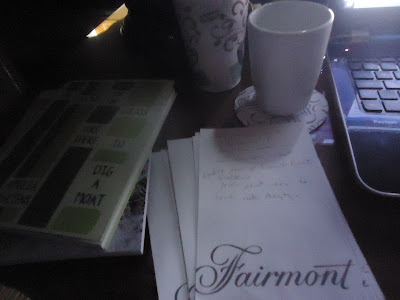 The weather en route was minimal (compared to other years), but the storm immediately prior meant that many of the trails had yet to be cleared, reducing any attempt at outdoor activities (whew), although Christine did take Rose out for a bit of a walk on the Sunday morning, as I remained in our room so Aoife could nap (and I managed a few scratchings at poems-in-progress). 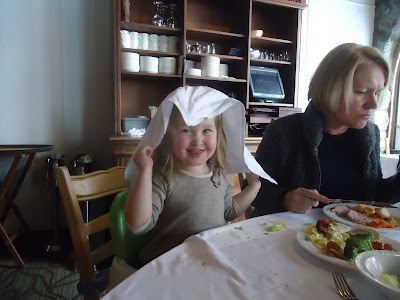 Given we'd four children in our group three and younger, I'd say we were rather contained, but wise, I'd say, to have us in the dining room earlier for meals, so we were less likely to bother the crowds (although we did find Montebello much less crowded this year; maybe the weather kept folk away?).

There was mayhem, certainly, but far less than you might think. 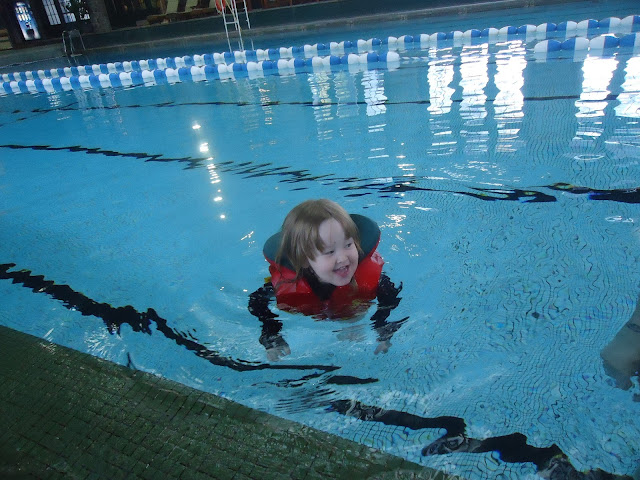 And Christine took Rose swimming not long before we left. Rose can now swim solo, if she's a lifejacket on. Terrifying. But the pool was nice and warm and completely empty. 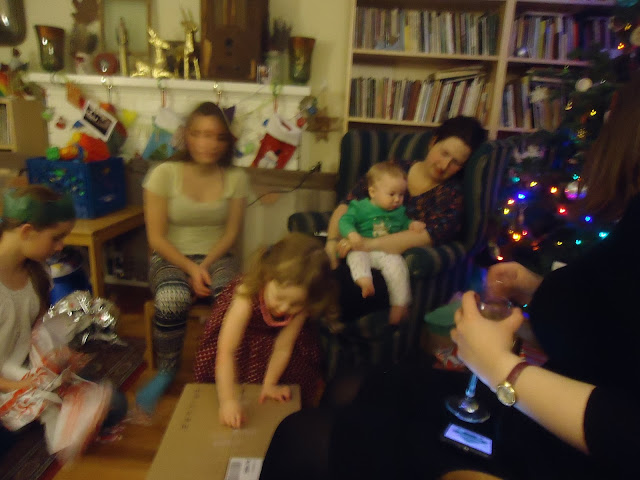 December 24, 2016: We hosted my family again, as we've aimed to do every second year now (this was our second time hosting). Given how many of us there are now (my three children + my sister's three children + them + my father also) every photo in its own way was an action shot.

Kate managed to arrive immediately after she finished work, and just as we were sitting down to dinner. There is something about hosting that feels slightly sad to me, in that the event goes by far quicker than it used to. Back when I would head over to the farm for the same, I would stay at least a day or two, if not up to a week, making the reduction of my family's Christmas down to a few hours rather compact. 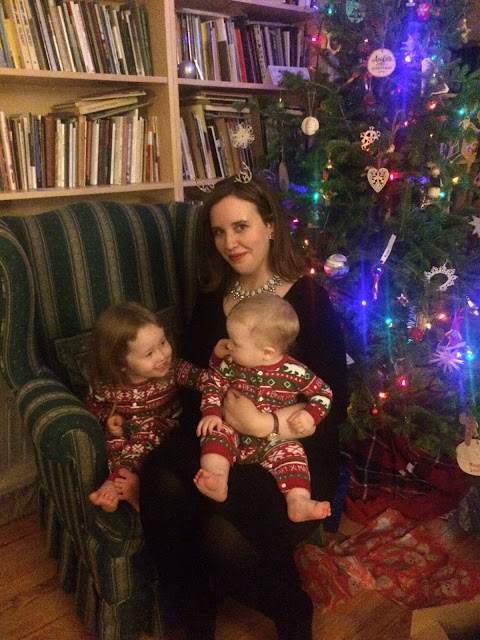 It was nice, also, to capture some pictures of all three of my daughters, together. Our two wee ones, of course, in matching pyjamas (apparently Christine has multiple alternate sizes, so they could even wear the same next year if they wished). 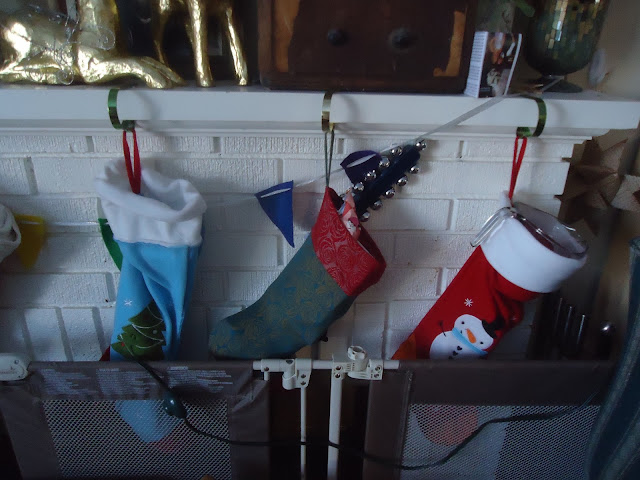 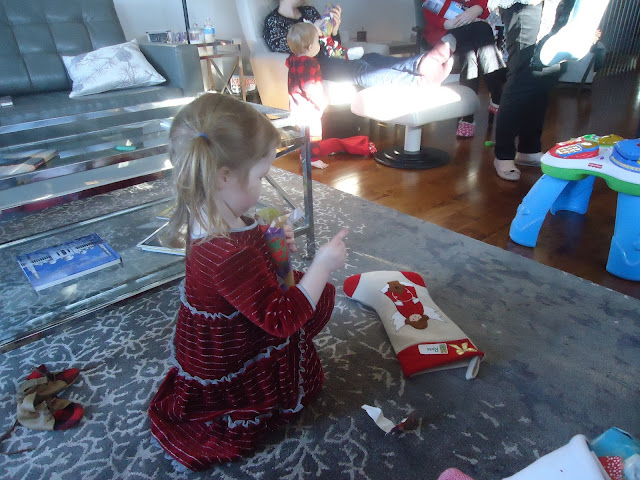 December 25, 2016: After the cat woke Rose, who then woke us (really!), we went through stockings and saw what Santa brought each of us. Rose got her bicycle and some jingly bells, Christine got socks, I got a can-opener, among other things (how did I get here?). The young ladies a shared dollhouse I slowly put together, like the 1950s dad I've become. 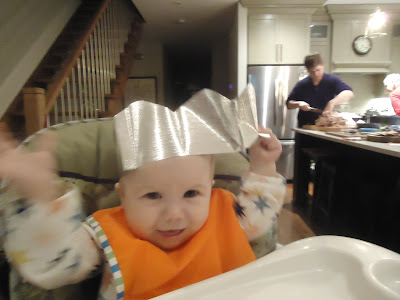 And, after stockings, we headed over to mother-in-law's house where we spent the day, along with brother-in-law and his family, and even his own mother-in-law. There were more stockings, as well as breakfast. Mimosas! Rose ran and ran and ran with her little cousin Duncan. She loves her cousin Duncan. We stayed the whole day (with a mid-afternoon break during which I delivered a load of presents home and managed to convince Rose to nap). Once we returned, there were toys and treats and crackers and paper hats (Aoife was less impressed with her paper hat). 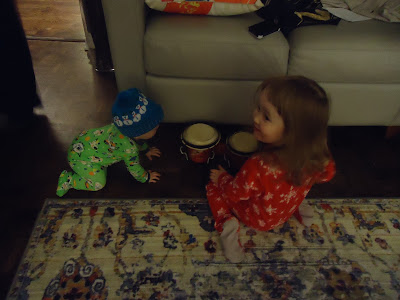 December 26, 2016: We headed over to Christine's cousin's house in the east end, for Paul and Carla's annual extended McNair gathering. Another day during which Rose ran and ran and ran around with cousins. Food! Drinks! Cousins! I think Rose is in heaven during those days. She only approached me at all during the time we were there because she required a change. She wandered over and announced to me: I need a bum change! And such is my lot.

By the end of the event, leaning towards bedtime, we'd both girls in their pyjamas, as Rose played bongos and Aoife listened. 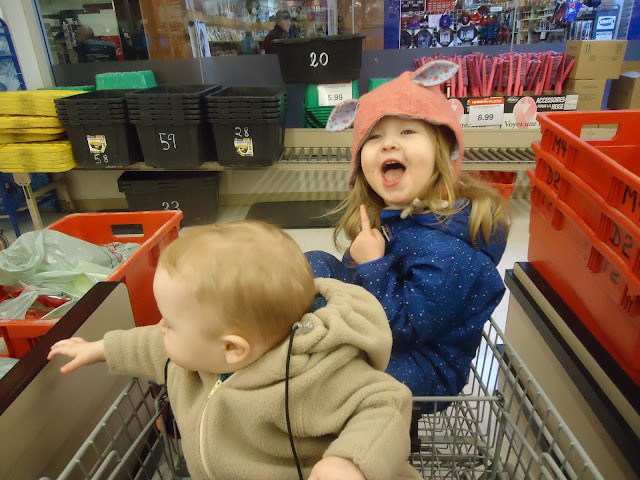 December 27, 2016: We didn't do anything Christmassy. We were exhausted. I took the young ladies out erranding, to allow Christine a rare solo breath. She did breathe. The ladies provided a valuable assist. Rose wore her new hat. 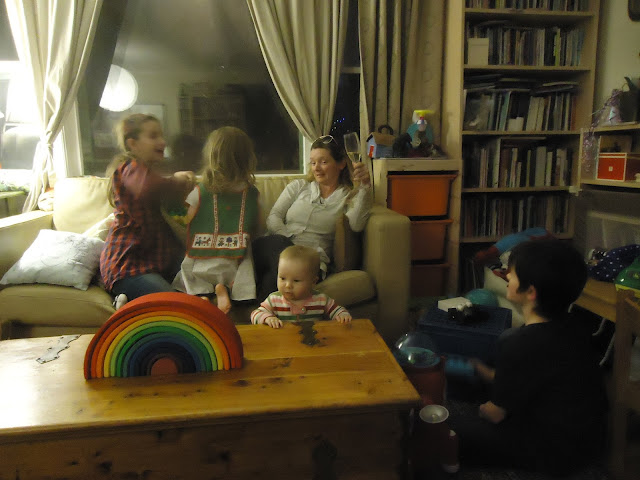 December 28, 2016: We hosted an extended McLennan/Page gathering far smaller than other years, given circumstance. It meant only my sister and her brood came by, which ended up even being a smaller gathering than what we had on the 24th. It all worked out, giving us a chance to actually hang out a bit more than we had a few days prior. And Rose ran around with her cousins again. She, as I've said before, loves that.

December 29, 2016: With Stephen Brockwell, I hosted our annual Peter F. Yacht Club Christmas party/reading/regatta at the Carleton Tavern, which I posted a report on here.