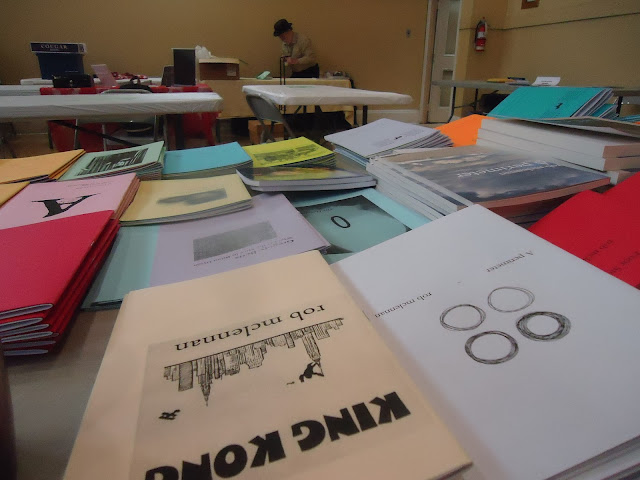 [the immediate view from my table, with Paul Dutton preparing his table in the far background]

See parts one here and two here and three here. And, also, my ongoing notes on the fall edition of the ottawa small press book fair.

Curious that I chose, semi-randomly, to review two small press literary journals in this post. Both include poems by Emily Izsak and Victor Coleman, from his “People Who Died” project. What are the odds?

Cobourg ON: Recently, Cobourg writer, editor and publisher Stuart Ross [see my recent Ploughshares interview with him here] has been talking about his plans to produce a sequence of new poetry journals, each with only one issue to their name. The latest of which is The Northern Testicle Review #1, which Ross describes as “featuring work by over 25 amazing poets from Canada, the U.S., Norway, Argentina, and South Korea. It’s ‘Issue #1 — The Final Issue!’ And it’s produced in a format I’ve never used before: letter-size sheets stapled down the left side into cardstock covers. As for the title, it’s a response to New Orleans poet Joel Dailey’s mag The Southern Testicle Review, which contained some of my work.”

ON THE OCCASION OF MY
SECOND TIME CONCUSSED

The issue contains poems by a whole slew of poets, including Alice Burdick, Jason Camlot, Allison Chisholm, Victor Coleman, Joel Dailey, Laura Farina, Mallory Feuer, debby florence, Jaime Forsythe, Loren Goodman, Richard Huttel, Emily Izsak, Mark Laba, Benny Langedyk, Lance La Rocque, Claire MacDonald, Kathryn Mockler, Sarah Moses, Leigh Nash, Nicholas Power, Tom Prime, Nikki Reimer, Laurie Siblock, Dag Straumsvåg and Hugh Thomas. Really, the appeal of any publication edited by Stuart Ross is twofold: knowing that there is going to be a list of ‘usual suspects,’ which happen to be a series of poets doing strong work (Burdick, Laba, Huttel, La Rocque, Nash, Power, Thomas, etcetera) as well as an intriguing series of new poets. Ross is a generous and varied reader of literature, and you might never know just who you might be introduced, or even re-introduced to by picking up one of his journals. The real fun is wondering what the next journal might just be called.

the birds are electric   the wires are ashes
hark! fuzzy void of love-blip
lone shiver of losing

some silence of poppies (Claire MacDonald)

Toronto ON: I’ve been a fan of COUGH magazine for a while now, the official/unofficial occasional journal of the “bpNichol Lane Writers Group,” edited and produced by a different member of their informal group with each issue. The ninth issue, guest-edited by Brock Hessel, includes work by James Irwin, David Bateman, Brad Shubat, T.A. James, Victor Coleman, Emily Izsak, Michael Boughn, Michael Harman, Oliver Cusimano and Android Spit. I’m not sure who did the artwork on the cover and throughout, but would suspect the editor, given he is listed as “editor/artist” in the colophon; a safe supposition, I would think. The artwork is odd, jarring and lively in a rather interesting way. Part of the enjoyment of COUGH comes from both the mix of styles and the roughness to some of the work, including work by more experienced writers such as Coleman and Boughn alongside work by, for example, Cusimano and Bateman. There is always such a lively energy to the issues they produce, and while everything might not be perfect-polished, it seems entirely not the point. One of my ongoing favourites of the group has to be Toronto poet Emily Izsak [see her “Tuesday poem” up at dusie here], who now has a first trade collection forthcoming from Signature Editions in spring:

Quixotic language
warlike in direction
flares up
in habitual trickery

After going through her chapbook [see my review of such here], I’m curious to see what she can do in a larger space (I think she is a poet that is going places). Otherwise, there are more than a couple of further highlights to the issue – including Android Spit (a piece I would love to hear performed publicly) and Michael Harman – but the Oliver Cusimano poems really jumped out at me as well [looking forward to including his work in an upcoming issue of Touch the Donkey]:

really spin down its clock tower in the
fashion described massively & stored at
owned facilities, or another version
what route below has hardly any response

Interesting comments on COUGH. Emily Izsak is a very interesting young writer. I think she's one of the best under 30 poets going. And I've known Oliver Cusimano for a long time but haven't seen any of his newer work. I think this poem you've reprinted is the best of his I've ever read.