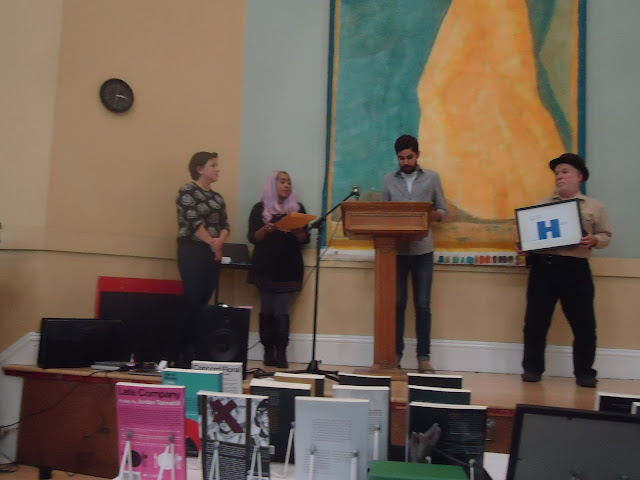 [the announcement and presentation of the annual bpNichol Chapbook Award]

See parts one here and two here. Might there be more? Probably, given how much I returned home with. I’m hoping soon to start making notes, as well, on some of the items I gathered at our more-recent ottawa small press book fair…

Toronto/Ottawa ON: From editor/publisher (and poet) Maureen Scott Harris comes Ottawa writer Elizabeth Hay’s The Original Title (A Fieldnotes Chapbook, 2016), a gracefully-produced chapbook in a run of one hundred copies comprised of a short talk originally delivered as part of the fourth annual Joanne Page Lecture Series at Queen’s University in Kingston. As Harris writes in her “12 or 20 (small press) questions” interview: “Fieldnotes operates pretty much within the gift economy—chapbook authors get 10% of the print run. I try to recoup design and printing costs. If I do better than that the money goes towards the next publication.” An utterly charming essay, Hay speaks to drafts and regrets, and the elements that fall away from a novel during the revision and editing process. This includes elements that an author might still be attached to, such as the revelation that her novel Late Nights on Air had originally been titled The End of Shyness before shifting to Dido in Yellowknife, “and then Late Nights on Air after a friend told me everyone would call the book Dildo in Yellowknife.”

After finishing Late Nights on Air, I went to England for a month and while I was there the page proofs came to me. I went over them and it seemed I had constructed the novel out of four words. Lovely. Tease. Tender. Soft. And in that order I plucked them out of the book like unwanted hairs from a chin. Searching for alternatives to “tender,” I overused “soft,” then I plucked out an infinity of “softs,” for they had multiplied when I wasn’t looking. I replaced the “softs” with feathery, lush, altered, lingering, quiet, calm, warm. I could have built a nest with all those discarded softs.
During that month I went several times to the British Library’s Treasures Room, and using headphones I listened to James Joyce’s odd little voice, light, boyish, insubstantial, reading from Finnegan’s Wake. Then to Yeats’s rolling delivery, repetitive, easy to parody. And to Seamus Heaney, a great natural reader. And to Virginia Woolf whose voice sounded surprisingly old, librarian-like, with a bit of a singsong to it. She talked about craftsmanship, about how every word is stored with the echoes of older uses. Just as each book, I’m suggesting, is stored with the echo of earlier intentions.

Calgary AB/St Catharines ON: From Calgary’s No Press comes Andrew McEwan’s Can’t tell if this book is depressing or if I’m just sad (August 2016), a small, hand-sewn chapbook produced in an edition of forty copies. McEwan’s poem is comprised of lines collected by a twitter-bot, @UN_REVIEW, which gathered references to “book” and “depressing,” suggesting prior machine-produced works such as Bill Kennedy and Darren Wershler’s apostrophe (Toronto ON: ECW Press, 2006) and update (Montreal QC: Snare Books, 2010), allowing a machine to collect lines that then may or may not be further selected. A machine may have constructed this poem, but it was not, precisely, machine-made, given that McEwan gave the directions; think of all the painters who did the physical labour for Andy Warhol artworks, for example. That’s the same, right?

This book is depressing, from beginning to end.

This book is so depressing why do I keep reading it

This book is damn depressing

This book is actually depressing as hell, why did I have to choose this one

This book is really depressing! I need to stop but I can’t

This book is depressing me. So close to the end… just gotta finish.

Given the potential infiniteness of such a project, might there be a larger version? But oh, the grief in seeing so many lines on Twitter about how particular books are depressing certainly weighs.