Night & Ox were written during the winter of 2013 and the summer of 2016. During this time, the European Space Agency’s Rosetta spacecraft caught up with Comet 67P/Churyumov-Gerasimenko and dropped the Philae lander onto its surface. The lander bounced across the comet’s terrain and settled somewhere on its duck-shaped head, where it finally received enough sunlight to emerge from hibernation and contact the Rosetta spacecraft. I first saw the images taken by Rosetta’s navigation camera when the comet reached perihelion, its closest approach to the sun. The first images I saw were of a comet deep in shadow surrounded by crisscrossing sunlit jets of gas and dust; a comet’s silhouetted underbelly surrounded by faint traces of debris; grainy images of a two-lobed comet uneven in gravity and surrounded by a matrix of stars, particles and a halo of camera noise.
Within the intervals of these transmissions between Rosetta and Philae, I was learning to be a father. The same sunlight that woke Philae covered the backyard and kitchen and my two sons at play in our home on Trinity Street, Vancouver, where I wrote most of Night & Ox. These images taken by Rosetta became the mood lighting of a poem that constantly defied containment. When I started the poem, I was just beginning to learn about my boys. I was, as Tom Raworth writes, ‘alive and in love’ and both completely adrift in this intimacy and completely contained by the rituals of parenting: the bedtime, the snacktime, the naptime, the shit. I wrote Night & Ox within these rituals, typing the first lines of the poem with one hand, holding my son Sacha as he slept. With his form attached to mine, the lines took on a shallow and hurried breathing, one of restlessness and the infinitesimal movements of a body bound tightly to a larger form. 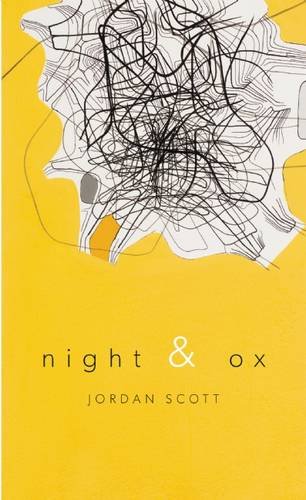 I’m curious about how such a work was composed around and through new considerations of fatherhood, of children; on the surface, this is immediately comparable to some of Ottawa poet Jason Christie’s recent poetry, as well as some other recent works: Ottawa poet Monty Reid’s Meditatio Placentae (London ON: Brick Books, 2016) [see my review of such here], Minneapolis poet Chris Martin’s The Falling Down Dance (Coffee House Press, 2015) [see my review of such here], Dallas, Texas poet Farid Matuk’s My Daughter La Chola (Boise ID: Ahsahta Press, 2013) and Dan Thomas-Glass’ Daughters of Your Century (Furniture Press Books, 2014). For some, the shift to new-fatherhood (and new-parenthood, generally) is impossible to not write about [see my own four-part essay on fatherhood here], from the distractions and attentions to the expanded and connecting perspectives upon family, mortality and being (“entrail’s equinox / purring kid sounds / translunar and / clay parsec”), and simply wondering how the whole thing can hold itself together without collapsing. From a poet highly aware of breath and stammer, Scott’s short, predominantly single-word lines highlight a movement of, as he says, “a shallow and hurried breathing […],” and even include the occasional created compound word, a la Paul Celan, pushing to increase his precision with words that hadn’t yet been built. As he writes: “stutterkiss / in / blithe / scorpion / some / endless / typhoon / spill / I / here / endless / obedience / forms / sight / wounding / longer / I / wait / for / little / things / to / cross / a / threshold […].” Scott’s poem-structure is even slightly reminiscent (albeit a pared down version) of the rush of American poet Ron Silliman’s Revelator (Toronto ON: BookThug, 2013) [see my review of such here]. With the single, extended poem running left-margined along each page, there is a breathless rush that can’t help itself, one that also focuses highly on each line, pausing and accumulating and quickly moving in a staccato-accumulation that feels, if not endless, certainly ongoing.
Posted by rob mclennan at 8:31 AM
Labels: Coach House Books, Jordan Scott

very excited to read this book. The attention Jordan Scott grants things and sound combined with the description he gives above and the description you give above all make me want to spend time with his new work.
Interested too, to think about parenthood and poetry especially after working so hard not to address those things in my work when my kids were small. I felt I couldn't, shouldn't, wouldn't if I wanted to have a life in poetry. I am happy that folks can, now, but I wonder about that giant 'don't' I felt, and I'm sorry, too, because those would have been fecund, ferocious poems. Funny, too, that someone as forthright as I am, as resistant to 'no' as I am, would have not. I did, a bit, but not as fully immersively as some of the fathers you mention above.