I didn’t know my milk
could return      racing

of the bombing of Hiroshima 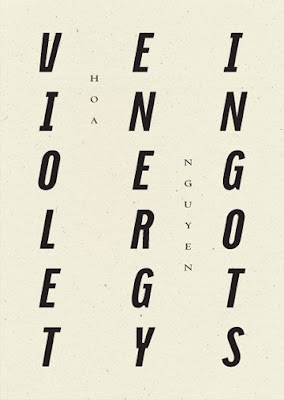 The short lyrics that make up Nguyen’s Violet Energy Ingots quilt together into a sustained conversation around pop culture, history, domestic matters and other concerns both large and small that in her hands become intimate, whether referencing the 70th anniversary of the bombing of Hiroshima, Anna Karenina, the song “Judy in Disguise,” Toronto trees, motherhood, the poet Philip Whalen or the colour red. To preface a recent interview with Nguyen posted online at The Walrus, Toronto poet and critic Michael Prior wrote that:

Her poems often use carefully juxtaposed phrases—images, fragments of dialogue, puns—in order to reveal the power structures and ideologies embedded in the seemingly most innocuous of comments and objects. Accordingly, Nguyen’s poetics are attentive to what she calls “the constellations of influences and community.” Nguyen’s phrase captures the striking allusiveness of her own work—in the first twenty or so pages of Violet Energy Ingots, the reader encounters 1960s song lyrics, Hellenic furies, an Egyptian pharaoh, Jane Fonda, and US poet Jack Spicer among many other literary and cultural figures past and present.

Posted by rob mclennan at 8:31 AM
Labels: Hoa Nguyen, Michael Prior, The Walrus, Wave Books