For the sake of the fortieth anniversary of the writer-in-residence program (the longest lasting of its kind in Canada) at the University of Alberta, I have taken it upon myself to interview as many former University of Alberta writers-in-residence as possible [see the ongoing list of writers here]. Seethe link to the entire series of interviews (updating weekly) here. 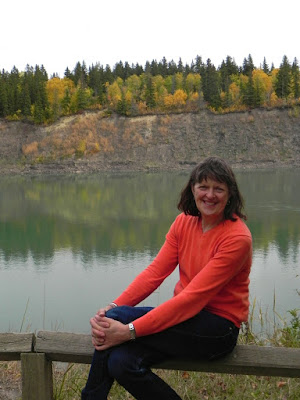 Erín Moure by the North Saskatchewan River in Edmonton. Photo by Karis Shearer.

Erín Moure is a poet and translator of poetry from French, Spanish, Galician and Portuguese. Her work has received the Governor General's Award, Pat Lowther Memorial Award, and A.M. Klein Prize (twice) and been a three-time finalist for the Griffin Prize. Her Insecession, a biopoetics echoing Chus Pato, appeared in one book with Pato’s Secession, in Moure translation (BookThug, 2014). Her French/English play-poem Kapusta (Anansi, 2015), sequel to The Unmemntioable, was a finalist for the A.M. Klein Prize and was a CBC Best Book of 2015. 2016 will see three new Moure translations from Galician and French: Flesh of Leviathan by Chus Pato (Omnidawn), New Leaves by Rosalía de Castro (Small Stations), and My Dinosaur by François Turcot (BookThug).

She was writer-in-residence at the University of Alberta during the 2013-14 academic year.

Q: When you began your residency, you’d been publishing books for more than three decades. Where did you feel you were in your writing? What did the opportunity mean to you?

A: For me writing is always starting anew, as a beginner. Language always asks me to begin again. I don’t want to do what I did before.

I went to Edmonton very excited about spending time in English, and having time free of freelance work slogging (which largely conspires to make creative life impossible) to complete one poetic project (Kapusta, appeared from Anansi in 2015) of my own, and do a very complex and long translation of Brazilian Wilson Bueno’s work in Portunhol with Guaraní into English flecked with French and, I had hoped, Tsuu T’ina or another indigenous language of Alberta… that didn’t work out, and I decided to keep the Guaraní… but I did finish the translation and start trying to find a publisher. It will be out in the second half of 2017 from a US poetry press, but I won’t name it as I haven’t received the executed contract. I also wanted to spend those months with my father, whom I knew was near the end of his days and was in a seniors residence in Edmonton. He wanted to be part of my poetry life again too. Unfortunately for me (but fine for him, given his health), he died 10 days before the start of the residency; we were able to say goodbye and accompany each other, but the residency plan was altered.

A: It allowed me to be in Alberta to grieve my father, for sure. I was working on specific projects, and just trying to live more calmly and focus on them. I snowshoed by the river, and took self defense classes, made use of the gym and bike paths and all, and the library was a great resource. The department itself was in a bit of disarray as there were budget cutbacks at the university level and an offer of early retirement packages that year; as well, one of the key poetry people, Christine Stewart, was on sabbatical.

A: Through my usual office hours, I found there was a large contingent from the community who came for advice on every imaginable project and genre, unlike at other university residencies where mainly students make appointments. As well, I met with and worked with many great folks from Modern Languages, both profs and students, and some students in creative writing, via the poetry translation seminar I led all year. They were a marvellous group. I visited Jenna Butler’s poetry class, the TYP classes, attended events in the History department, in Modern Languages, and in English. I was also invited to speak elsewhere in Alberta (besides the exchange with U of Calgary): I gave a class in the history of writing and thinking at the college in Maskwacis, the Cree community south of Edmonton, and a talk at the U of Lethbridge.

A: For me, the highlights were my class visits doing workshops in the TYP classes — the Transitional Year Program for Indigenous students coming into the university for the first time. They really inspired me, both the students and the profs, and excited me by their desire to learn and not just to learn, but to change learning as we know it, change the university, grasp new ways of viewing learning. Also, the river was a highlight.

Q: Were you influenced at all by the landscape, or the writing or writers you interacted with while in Edmonton? What was your sense of the literary community?

A: The literary community in Edmonton is rich and varied and very welcoming in many ways; I would say I hung out more with the landscape and with the writing I was critiquing, and with my own projects which I desperately needed to work on! It was a renewal, for me. A luxury and and a fount of new energy. And I met folks I still keep in touch with, probably moreso than at other residencies. Had many great interactions with profs in the dept, such as Dianne Chisholm, Julie Rak, Keavy Martin. And because of the neighbourhood I was living in, and the fact that I did my grocery shopping on a bicycle and not in a car, I also had a lot of interesting conversations about the downside of the oil industry and the crises in mental health that people were living with on the streets. I met a lot of people who were ravaged, really, but also, strangely, full of hope for their day. I learned a lot.

Q: Given you are originally from Alberta (specifically, Calgary), was there any element of the position that felt like a return?

A: Being in Alberta was great. I grew up in Calgary decades ago, a different Calgary than the one that exists today. I have brothers in and near Edmonton, who are great guys, and my roots are definitely in the landscape of Alberta, those sounds, those trees, the river, the animals along the river. All these are my familiars, in a way, and kindling those relationships was vital to me. I felt close as well to both my parents, to their movements and voices, and to my grandmother. All of which really helped me work.