Kate Schapira, Handbook For Hands That Alter As We Hold Them Out

I walked with my new beauty out from the circular houses.
Its seams ripped and frayed whenever I moved it.
New beauty is made of erectile tissue
made to bunch and wear out under the bridge
where pigeons live, loose-feathered and odorous.
Beyond the circular houses and the bridge, construction.
The new beauty was a knockoff, scarred together,
of a suit damp, flaking and acute.
Like a snake, I was glad to have it around me
making me more sensitive to everything.
I wore it inside out for extra tremors.
Dust drifted in heaps from the construction site.
It combined with moisture to engorge my new beauty.
The seams and uneven blood flow made a terrible outside
almost as if they were made from somebody else.
My new beauty was the construction site of all feeling.
Underneath it, I was becoming different.

There is an anxiety that runs through Providence, Rhode Island poet Kate Schapira’s fifth poetry collection, Handbook For Hands That Alter As We Hold Them Out (Denver CO: Horse Less Press, 2016), one that expresses itself through references to interpersonal relationships, climate change and cultural and community shifts. As she writes to open the prose poem “RED HOUR”: “When the red hour rings everyone falls for it. Everyone loses it. The red hour rips the wet giving-in bag of it, but what is it? What we want, loosened like a screw? The robots in us ring out, pivot thrust and circuit fart in public, tear pseudoskin and fuck wall sockets. We lose ourselves in it.” In a profile for the Brown University website, Nina Markov wrote: “Kate Schapira makes poetry that is both socially engaged and devoted to ‘the swing of a line or sentence.’” Later, in the same piece, Markov adds that “One of Schapira’s central preoccupations, she says, is the relationship between the individual and community.”

For Kate Schapira, poetic practice is a form of social engagement. While she seeks to write poetry that is “rigorously accountable” and “politically and ethically informed,” she aims for “illumination rather than transparency,” Schapira says. To that end, she pays close attention to the “rhythm and sound of language, to the swing of a line or sentence” and never loses sight of poetry’s potential to move, surprise, and inspire wonder. 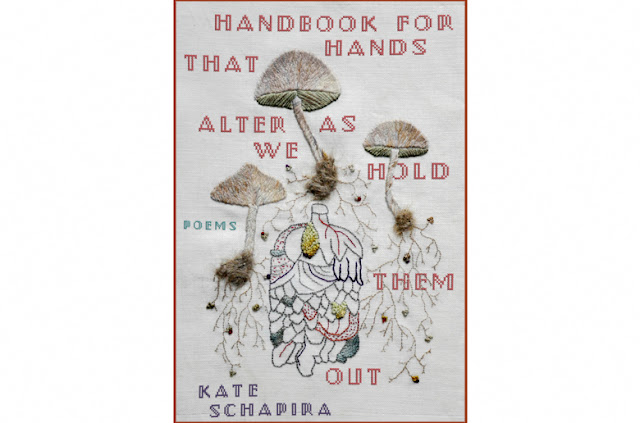 The author of TOWN (Queens NY: Factory School, 2010) [see my review of such here], The Bounty: Four Addresses (Las Cruces, NM: Noemi Press, 2011), How We Saved the City (Ithica, NY: Stockport Flats, 2012) and The Soft Place (Horse Less Press, 2012) [see my review of such here], Schapira’s poetry is one of connectedness, such as her articulations on how the human world interacts with and intersects nature, aware very much how precarious human activity has made numerous natural systems. One could easily argue that Schapira’s connectedness extends structurally as well, from composing poems that speak to each other via suite or sequence to her ongoing engagements through the book as unit of composition, composing book-length suites of lyric poems, fragments and threads to construct a whole cloth, from the overt project-work of her first collection, TOWN, to the threads that hold sequences, sections and, really, the entire length and breadth of this new collection. She works on books, it would seem, and her connections between poems become stronger in their subtlety.

A head without limbs lives by description and emphasis. Hot melon dropping description. Wary, but not cautious. They decide everything together in the hollow theater where the hair is dug in, if you sliced them open you’d see it, tight on the inside, the mischief of it dispersed with a smell like when the straightening iron hits, all behind a bright ad with blue contacts. It would kill them. They mean you to take them literally: put your best head forward. (“WOMAN WITH EXTRA HEADS”)

In Handbook For Hands That Alter As We Hold Them Out, Schapira reminds us just how good she is at composing expansive lines that stretch across the page like runners, furthering and furthering a thought into a series of thoughts, such as the opening of the final poem in the collection, “FOOD POEM FOR THE NEW YEAR / (FUNGUS POEM)”: “White negatives of flour on the new baking sheet after the biscuits come / off, like ringworm //// fungus is the abandoned shirt of absence, foxed paper, cheese left out for / flavor furred almost invisibly urging a change of plans. Fresh mushrooms / firm and deliberate under their clingwrap shrug, fall to decomposers of / their own [.]”