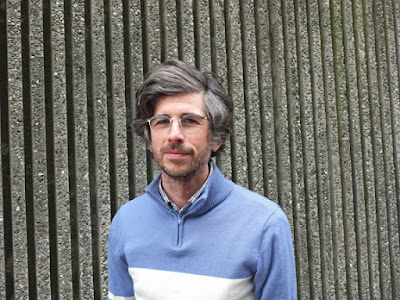 Malcolm Sutton lives in Toronto. His fiction has appeared in Maisonneuve and Joyland, and his writing on art has appeared in C Magazine and Border Crossings. He is the Founding Editor of The Coming Envelope journal of innovative prose, and the Fiction Editor at BookThug Press. Job Shadowing is his debut novel.

1 - How did your first book change your life? How does your most recent work compare to your previous? How does it feel different?
Job Shadowing is my first book. I don’t know how it will change my life. So far it has made me realize that there are almost no pictures of me on my digital camera. Author photos are so difficult to come by.

2 - How did you come to fiction first, as opposed to, say, poetry or non-fiction?
It was always narrative for me. Even when I was at art school I was making narratives from still photos and videos. I like the tension between narrative and non-narrative. I like the things that narrative forces you to do as a writer, like choose one direction out of so many possible directions. It forces you to play things out, and there is meaning in that.

3 - How long does it take to start any particular writing project? Does your writing initially come quickly, or is it a slow process? Do first drafts appear looking close to their final shape, or does your work come out of copious notes?
So slow. It builds somewhat sculpturally, I chip away at sections and return to them again and again until they look like something. The parts of Job Shadowing that I actually recognize as germinal to the final work don’t contain any of the narrative of the final book. They contain ideas of themes, but not the story.

4 - Where does a work of fiction usually begin for you? Are you an author of short pieces that end up combining into a larger project, or are you working on a "book" from the very beginning?
I was just reading an old bio of mine on the Internet, from about 4 years ago, and it said that I was working on a novella about job shadowing. So I suppose I was working on a longer piece from the beginning, but did not expect it to expand into a 200 page novel.

5 - Are public readings part of or counter to your creative process? Are you the sort of writer who enjoys doing readings?
They can help with editing, in that they force you to cut away all of the ideas that you might have misgivings about yet want to keep out of vanity. Before I give a reading, I have the panic of public exposure. So my writing always becomes trimmer. Anything cliché gets cut. Anything weak goes.

6 - Do you have any theoretical concerns behind your writing? What kinds of questions are you trying to answer with your work? What do you even think the current questions are?
In one sense Job Shadowing was my way of working through feelings toward how Boomers came into employment as compared to my generation (I suppose I’m Gen X, though I feel at the tail end of it). So the book explores what it means to be of a generation, as part of historical change. There are a lot of other theoretical concerns, such as what it means to be a couple. I don’t want to say what conclusions I came to because that is what the book is about. But I was really unsettled by what conclusions arrived at.

7 – What do you see the current role of the writer being in larger culture? Does s/he even have one? What do you think the role of the writer should be?
There is an old idea that art is in opposition to culture. Most of our media, however, such as newspapers, radio and TV, treat art as culture. Pretty much all popular media lives out the postmodern fantasy of erasing the division between high and low art. There is no distinction for them between Game of Thrones and The Argonauts. I would love to hear more dissent coming out of the mouths of writers (in big media contexts), saying no when everyone wants them to say yes. I don’t know if that is a role, but it’s something.

9 - What is the best piece of advice you've heard (not necessarily given to you directly)?
Rather than setting up a nursery for your newborn, set up a second bedroom for yourself.

10 - How easy has it been for you to move between genres (fiction to critical prose)? What do you see as the appeal?
Sometimes I like to think of fictional narratives as essays. A story needs to be doing the same thing as a critical essay. They both need to push through with an idea in a coherent way, with evidence. A theme is a thesis. A conflict is a counterargument. The idea cannot get lost; the thread needs to be held onto.

11 - What kind of writing routine do you tend to keep, or do you even have one? How does a typical day (for you) begin?
Over coffee in a café, the first hour of the day. My novel was written mostly in Capital Espresso in Parkdale, Manic Coffee on College, and Café Contra in Seaton Village.

12 - When your writing gets stalled, where do you turn or return for (for lack of a better word) inspiration?
I read a lot of theory, and usually ideas that I read spark something and send me forward. While I was writing Job Shadowing I turned a lot to Fredric Jameson and his books The Valences of the Dialectic and Brecht and Method. Other books too. Sometimes it’s worth reading a whole book of theory just for a single idea – for a single sentence even. This was the case with Perry Anderson’s Passages from Antiquity to Feudalism. One really amazing idea.

13 - What fragrance reminds you of home?
(skip)

14 - David W. McFadden once said that books come from books, but are there any other forms that influence your work, whether nature, music, science or visual art?
Something I learned from TV shows (I hate to say) is how to leave scenes open. It’s a trick almost all contemporary shows do when they crosscut between multiple narratives: they don’t end a scene with someone answering yes or no to an important plot point, but rather they leave the decision unanswered, so that you keep watching to see which way it goes. When they pick up that narrative line again, the story is fully in motion with whatever decision was made.

15 - What other writers or writings are important for your work, or simply your life outside of your work?
There are so many and they are always changing. Here’s one, though: for many years now I’ve had an ongoing conversation with Jacob Wren about writing, and this has been very important to my thinking about it.

17 - If you could pick any other occupation to attempt, what would it be? Or, alternately, what do you think you would have ended up doing had you not been a writer?
Most writers are also educators or have other jobs. I am also a graphic designer and used to teach as well. I like the freedom that I see in my artist friends.

18 - What made you write, as opposed to doing something else?
I like writing because of how difficult it is.

19 - What was the last great book you read? What was the last great film?
For some reason Andy Warhol’s Philosophy: From A to B and Back sticks out. It was published in the mid-70s, the year I was born, and is made up of the dialogues between Warhol and other people named B. Warhol is just so smart but also sometimes shallow. If he were alive today I doubt that I would like him. Right now I’m reading John Keene’s collection of short fiction called Counternarratives, which is fabulous too.

Holy Motors (a film) by Leos Carax comes up in my head so much. I love how little dialogue there is and how little the audience knows in what is going on. Yet we have faith in the filmmaker as the film unfold in its episodes. And the whole strange thing grows into a narrative. I would like to write a novel like that film.

20 - What are you currently working on?
Any day I’ll begin the next novel.

love that you included the skipped question.