(A PRECARIOUS LIFE) ON THE SEA

the ocean you grew up watching has decided, finally, to take you in. “where else was i going to go?” you ask, setting off. it spews squid and minnows into your little boat for you to eat if you are hungry. you throw them back because you know the ocean is hungrier. at night, the moon casts a sidelong glance into your boat. you are less round. the ocean is delighted with your company. it carries you from place to place, each day a little easier, imagining your bright bones, sideways moons, it’ll use them as walking sticks.

The author of chapbooks through Proper Tales Press, Baseline Press and above/ground press, Montreal writer and editor Sarah Burgoyne’s first trade collection is Saint Twin (Toronto ON: Mansfield Press, 2016), a collection of, as the back cover informs, “story poems, short lyrics, long walks, tiny chapters, and fake psalms.” A hefty poetry collection at nearly one hundred and seventy pages, Saint Twin is a curious mix of straighter lyric, prose poem and short fiction, blended together to create something far more capable than the simple sum of its parts. Part of the unexpected quality of Burgoyne’s surreal lyrics comes from the structures of her pieces, slipping prose beside more traditional line breaks beside dialogue/script. Whereas most poetry collections hold together through their structural connections (some of which are the result of editors and/or copy-editors), Saint Twin remains deliberately scattered, almost collaged, maintaining a strength far more evocative than whether the collection of poems maintain consistent capitalizations or punctuations, all of which speak to Burgoyne’s incredible capacity for putting a book together. Furthermore, while the book might be structured into eight sections, one has to seek out the connections through other means; poems from the second section, “Psalms,” for example, according to the contents page, exist on pages “10, 13, 18, 23, 27, 30, 36, 42, 48, 51, 57, 61, 63, 67, 72, 81, 99, 113, 116, 119, 124, 132, 137, 139, 142, 144, 147, 152 [.]”

Torn up in the surgery of night. The buttering under of it. Seven halos away from becoming a sprig of something anointed. Never too few in the brooding door frames; the spoken-to lighting the walls. The corner-drawing minds buttoning silver horns of ancient wisdom. A voice: Dance with me, future loser, I love you. Hide under the table, I will call down the Lord without sulphur. To cast alms over our future mistakes. 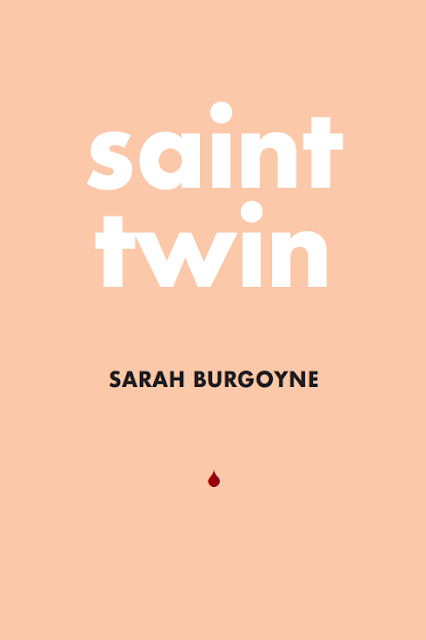 I’ve been long intrigued at the options on how to construct a poetry manuscript out of scattered parts, aware that some who compose in chapbook-length units have set the units side-by-side for the sake of the book-length manuscript: Toronto writer Kevin Connolly’s first collection, Asphalt Cigar, is a good example of this, as are Kansas poet Megan Kaminski’s two collections, Desiring Map [see my review of such here] and Deep City [see my review of such here] (I’m less aware, with Kaminski, the chicken-or-egg of “which came first,” admittedly). Another poet, such as Ottawa poet Stephen Brockwell, might have composed the individual pieces of his 2007 poetry collection The Real Made Up [which I discussed here] into  section-groupings, but resorted the manuscript into a single, book-length unit, allowing the final selection to blend together as a more cohesive single unit. What makes Burgoyne’s collection so unique is in how she somehow manages both sides of the structural divide, as one infers that the section were composed as single-units (at least two of her section titles correspond with chapbook titles), whether as short lyrics or prose poems, but were re-sorted for the sake of the full manuscript: the uniqueness lies in her adherence to that earlier, compositional structure, while allowing the book to live (or die) on its own single-unit coherence.

The poems in Saint Twin contain multitudes, from surreal wisdoms, biting self-awareness and hard-won observations to a wry humour, dark prophicies and proclimations, and an incredible optimism, such as in the poems “MY NEIGHBOUR’S MISFORTUNE PIERCES ME / AND I BEGIN TO COMPREHEND,” “IT WAS NOT IN PARKS THAT I LEARNED HUMLITITY” and “HAPPY BIRTHDAY, IN A NICE WAY.” As she write to open the poem “TO THE MASTERS OF OUR YOUTH, GREETINGS”: “the last days of a person’s life are the same / as the first [.]”

Maybe everything is good, after all.

The act of reading and the act of understanding

made it. The point is, relates to reality.

And what of this?

Wheels on the table legs. The main activity

Cyberspace, I walked across it.

Where the body is, at the corner.