Lea Graham, This End of the World: Notes to Robert Kroetsch

Last Thursday, the light at the ridge above that bend in the Hudson spread like Dreamsicles in July. Crows valentined dumpsters. Earth called cadence below. Lamps floated stem-less, sturgeon moons in a month of wolf whistles & Route 9’s chemical taste. Was it Williams who said “the hardest thing to do is see”? (Or was that just my gynecologist?) As a kid, my mother caged a crow believing one day it would sing “Hello, Dolly.” She faithfully fed it pork chops under a sycamore tree. Instead, it ate her spelling bee ring. She often said: Crows love the shiny things. Beware. 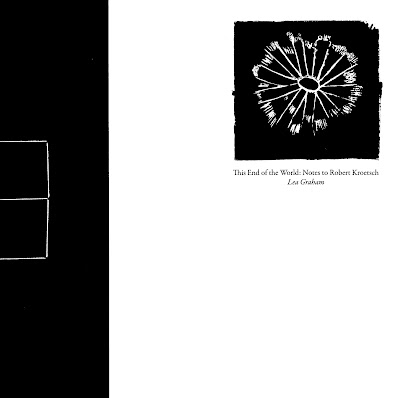 There aren’t that many poets from Arkansas composing poems influenced by Canadian prairie poet Robert Kroetsch, with the notable exception of Lea Graham (who, herself,was recently shortlisted for the 2016 Robert Kroetsch Award for Innovative Poetry), through her new chapbook This End of the World: Notes to Robert Kroetsch (Ottawa ON: Apt 9 Press, 2016). The author of the poetry collection Hough & Helix & Where & Here & You, You, You (No Tell Books, 2011) [see my review of such here] and the collaborative chapbook Metric (above/ground press, 2011) and Calendar Girls (above/ground press, 2006), Graham writes in her acknowledgements that “These poems were written in dialogue with many of Robert Kroetsch’s texts,” including Excerpts from the Real World (Oolichan Books, 1986), The Completed Field Notes (The University of Alberta Press, 2000), The Crow Journals (NeWest Press, 1980), The Hornbooks of Rita K (The University of Alberta Press, 2001), The Lovely Treachery of Words (Oxford University Press, 1989), The Sad Phoenician (Coach House Press, 1979), Too Bad (The University of Alberta Press, 2006) and What the Crow Said (General Publishing Company, 1978), as well as Andrew Suknaski’s The Ghosts Call You Poor (Macmillan of Canada, 1978) and Ken Jennings’ Maphead: The Wide, Weird World of Geography Wonks (Scribner Books, 2011). In an interview forthcoming at Touch the Donkey, she discusses some of her connections to prairie poetry (and poets) in Canada:

I think that being from Arkansas, I have both a good sense of humour about place, but also a sense of the underdog in me. I think that maybe that’s a sense of the west, what you are up against, a sense of the isolated or rural. I grew up partially on my grandparents working farm in Greenland, Arkansas where I had an acute feeling of how isolated I was from the rest of the world (meaning: the world of books). But also, I had these young uncles and an aunt who worked in my grandfather’s dairy barn and chicken houses—and who were always playing jokes on me and my brothers and on each other. They used to leave messages to each other written in soap on the bathroom mirrors. There was a toolbox of arrowheads, fish hooks, grinding stones and Civil War cannon balls under the sink in the bathroom. I have written of that image over and over again. The sense of the humorous and fleeting, but of the tactile and enduring, too. When I read cooley and Kroetsch, it felt like I was reading at least a part of my own family, but in the most intellectual and tricky ways. And to be geographically connective about it, my maternal grandmother was from the Dakotas and later Montana. Her mother was from Norway and had been a homesteader.  She—Dagmar Zacharias—is the only one of my great-grandparents who was from the old country—everyone else was “American.” In any case, my maternal grandmother met my grandfather when he was an itinerant worker from Northwest Arkansas during the Depression and had worked his way up to Billings, Montana where he worked part of the week in a bakery and another part in a dairy. The bakery was in a basement, but had a window onto the street where you could only see people’s legs. He picked out her legs of all the young nurses on their way to school. This family story (or maybe the way I tell it), doesn’t seem far from the Canadian narratives I’ve read.

Robert Kroetsch infamously called literature a conversation, and the epistolary poems in Graham’s This End of the World: Notes to Robert Kroetsch do read as missives directed to the late Alberta poet, composed directly from where she is to wherever it is that he is, or was, and her ten poem collection opens with a quote from Kroetsch’s Excerpts from the Real World: “Perhaps if I call you forever you’ll hear me toward the end.” Kroetsch famously wrote poems that spoke of repeatedly returning to the beginning; through composing “the end,” is Graham attempting to circumvent Kroetsch’s continuous delay, or is she simply responding in kind, composing the yang to his ying? Is she, through her title, admitting that she can actually hear him, and could the entire time? In the poem “After Irene,” written after a hurricane, she writes: “You’ve written that our job is to uninvent the world. To unconceal. To make visible again.” Later on in the same piece, ending:

You’ve said it yourself: we can never leave home, never escape the skiffle bands & buttermilk, the avocado seed suspended on windowsills. You with your buffalo wallow & tipi ring. So long Binghamtop dreams! Me with my Civil War cannonballs, knucklebones under the sink. Our storm’s core cages us like a story. Like a thousand sea birds, bewildered, becalmed, trapped in eye’s past.

Her poems are prose-thick with information and references, collaged narratives composed in furious, passionate bursts, each in their own way searching for ways in which to make sense of the chaos, all of which is directed beyond the immediate chaos and back into “Bob” (all of which makes me hope she comes to Ottawa next spring for the rumoured Robert Kroetsch conference, so she can speak to him further). “You sing on the other side of the Wailing Wall,” she writes, to end her poem “Excerpts from This End of the World”: “words I wish I could take back / from the Coro desert or the post-industrial town / I am doomed to & that promise / of milk, honey.” Her poems evoke much of Kroetsch’s work for their shared questioning, their passions, from friends, food, travel and lovers, and the occasional drunken revelry and crude passing remark. Throughout these poems there is a searching, a seeking, as she looks to the work of Robert Kroetsch for advice, and direction, almost as though the lyrics of Lea Graham are repeatedly asking Robert Kroetsch: Why does the heart want what it wants? As she opens the poem “On the Mystery of the Vanishing Phoenician from 110 Mill Street”: “Bob, / I am writing this from the old millstream where your Sad Phoenician vanishes. I bring it with me to sit on the ledge when I need the rush, an eyeful of swoosh. Just when I’m fixed on a bright flip-flop or stroller wheel, I realize it’s skedaddled.” Later on in the same piece, writing:

Last month it disappeared to a dance in Smuts. All the way to Wood Mountain, can you believe it? That bit from cooley, who said it had been seen with Suknaski’s ghosts. They snuck into an old Métis church with their beer breath & dialect, telling stories of Duck Lake, sex in mangers. It drug in a few days later, stone-roasted, announcing its retirement to Assiniboia. Boy oh boy, Bob, did you raise it to act like this? Even crazy mclennan swears it Skypes him late every fourth Tuesday, repeating pornographers & poets enjoy large views nine times before clicking end. He & his lady shake & drink & claim they’ll start banning its mention from the Mercury Lounge. It late-nights, inventing toponomies for Medicine Hat. Can’t shut up about the onomastics of ex-lovers (the woman from Nanaimo, et al). How do I exist with a book that goes on like this?