No, Hungarian is not a gendered language,
but no, you do not want to play Joseph in the
goddamned Christmas play again this year!

No, you’re not jealous that no on asks her which
bathroom key she wants, even though
you’ve been asked this while wearing a skirt.

No, no long hair, no stockings,
no heels, no tailored shirts. No way to indicate
them, no not them, not her, not him, just them.

No, she always gets to play Mary, and no,
you do not want to play a goddamned
shepherd either!

In an interview posted over at Touch the Donkey [a further interview with her on the same project lives here], Calgary poet (recently returned to the city after an extended period schooling in Montreal) Helen Hajnoczky discusses her second trade poetry collection, Magyarázni (Toronto ON: Coach House Books, 2016):

Q: I’m curious about the Magyarázni poems: you speak of a difficulty in part, that came from writing out your relationship with your cultural background and community. What prompted you to begin this project, and what were your models, if any? I think of Andrew Suknaski writing out his Ukrainian and Russian backgrounds, for example, of even Erín Moure exploring the language and culture of the Galicians. And might Bloom and Martyr have progresses so quickly, perhaps, due to it being a kind of palate cleanser?

A: Magyarazni germinated for a long time. There’s a wood chest in my parent’s house that my dad carved, and the tulips in his design are what inspired my project originally, particularly the visual poetry in the book. I started doodling tulips in the margins of my school notes with letters at their centre, with the accents used as stamen, long before I had really been introduced to visual poetry. The moment that sparked the project, though, was one night when my dad and I were up late chatting about when he, his sisters, and his mother left Hungary after the ’56 revolution and I thought “I should really write this down.” So, I went and typed up everything he’d said and made a little chapbook of it for him. I wanted to do something more on the topic though, and was fortunate to get a grant for the visual and written poetry book and to travel around Western Canada interviewing people who’d come during or after ’56, or whose family had done so. Originally I’d thought of including the interviews and poems in one book, but the interviews are numerous, long, and detailed and really deserved to be their own thing (which I’m still slowly working on). Though I didn’t use anything from the interviews in this book the people who so generously told me their stories definitely influenced me and the writing of Magyarázni.

For more poetic influences though, Oana Avasilichioaei’s book Abandon, and the way she deals with cultural identity and nostalgia had a huge influence on me. The way Fred Wah’s writes about cultural identity, how that’s tied up with family, and the way he sets all this against the backdrop of the prairie all strongly informed the way I approached writing this book too—there’s a lot of Calgary in Magyarázni. Additionally, in 2007 Erín Moure and Oana Avasilichioaei spoke at the UofC for Translating Translating Montréal, and I have this fuzzy memory of them discussing translating words based on a feeling of the word or based on a word in a third language that the word in the source text reminds you of (I can’t remember precisely what they said and I don’t want to misquote them or misrepresent their ideas, but I believe the discussion was something along these lines), and this idea was key in the writing of Magyarázni. For example, the poem “Belváros”—the word translates into English as “inner city” (so, downtown), but I always hear it as ‘beautiful city,’ because in French ‘belle’ means beautiful. I went to a French immersion elementary school and I started hearing the word that way as a little kid, and I still hear it that way, not as inner city but as beautiful city. Because the project struggles to answer the question of how much one person’s experience of a language or culture can be representative of a community as a whole, I thought it was important to include these little hyper-personal feelings about words in the manuscript. 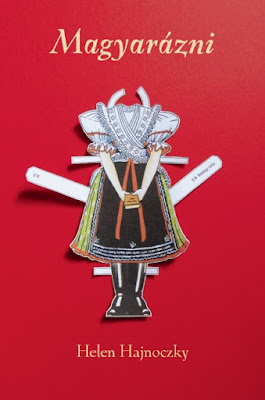 The author of numerous chapbooks, Hajnoczky’s first trade collection appeared as Poets and Killers: A Life in Advertising (Montreal QC: Snare/Invisible, 2010) and a portion of her manuscript “Bloom and Martyr” was selected for the 2015 John Lent Poetry-Prose Award, to be published as a chapbook by Kalamalka Press “in spring 2016.”

As the press release for Magyarázni informs: “The word ‘magyarázni’ (pronounced MAUDE-yar-az-knee) means ‘to explain’ in Hungarian, but translates literally as ‘make it Hungarian.’ This faux-Hungarian language primer, written in direct address, invites readers to experience what it’s like to be ‘made Hungarian’ by growing up with a parent who immigrated to North America as a refugee.” Bookended by the poems “Pronounciation Guide” and the prose poem “Learning Activities,” Magyarázni is composed as a stunning, lush and lively abecedarian, and each poem appears with a corresponding visual poem in resounding red and black. There is an element of “coming-of-age” to this collection, as the author/narrator works to reconcile the past with the present (and future), from a childhood built by Hungarian language and culture (from her parents’ own stories to her own engagements with cultural heritage), and how such foundations now require translation and explanation, even as she attempts to reclaim those same histories. Magyarázni writes her childhood home, her parent’s homeland and her time spent in Montreal (as in the poem “Zibbad,” as she writes: “You’ve been here longer now / than you were ever there and then some.”), writing embroidery, linen, memory and grief.

Your reflection
splintered in foil
these solemn treats

unhooked from the tree
you melt

a plastic angel dipped
in flames, blurred
and bubbling

you unwrap
the old world
you chew
and smile

you don’t swallow
until they look away.