I wander lonely as a clod
in a bondless ble sky.
I’m living in a bbble,
the little engine
that cold.

I miss being a nit.

Me and my big
moth, devoring
every planet y’all
were in. Only
Mars and Earth
can sstain life now.
what a clsterfck!

I’ve lost ten ponds.
I’ve been hiding in the
Hose reading The History
Of Tom Jones, a Fondling.
I need my fond pot back.

I am ardor’s American
neighbor. At the la,
grass skirts hla;
I slmp in a
mm.

I know I was sed
bt I miss that sing.

The author of the poetry collections misled (Calgary AB: Red Deer, 1999) and Joy Is So Exhausting (Toronto ON: Coach House Books, 2009), as well as the chapbook Good Egg Bad Seed (Vancouver BC: Nomados, 2004), Windsor, Ontario poet, editor and critic Susan Holbrook’s latest poetry collection is Throaty Wipes (Toronto ON: Coach House Books, 2016), composed of (as the press release tells us) “her signature fusion of formal innovation and lyricism […]” The poems in Throaty Wipes are composed as a mix of lyric, prose and visuals, as Holbrook explores movement, language, sound and lyric. Structurally, her poems explore different ways of seeing, shaping and sounding, experimenting wildly between and amid forms to show numerous possibilities between “how poetry works” and “how prose works,” or, more specifically, utilizing language poetry to explore the gradient between the lyric, the fragment, and the sentence (with the occasional visual play utilizing letter size and movement thrown in for good measure).

Good guys do not bomb your buzz with an encyclopedic knowledge of ordnances. Good guys are peace buffs. They say Little Girls for Mayor. Sift pink dust into the Sistine stove. Good guys see eye to eye with man-haters, who hate guys. Man-haters are good guys: they may flip bad guys the bird but they do not shoot them in the face for going to school; they are too busy helping women through PTSD in their under-funded offices. If you knew what they knew you’d be a man-hater along with the good guys. If abuse always produced abuse, we’d fear the fang-glitter of little girls. I remind the man-hater I love that there are good guys. (“GOOD GUYS”) 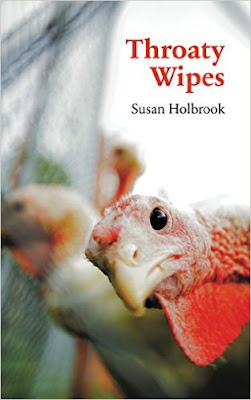 On the surface, Throaty Wipes might appear a gathering of assorted poems linked, if at all, only through a curiosity about and engagement with poetic form (the final poem in the collection, for example, is “WHAT POETRY ISN’T”), and what and how a poem communicates, constructed as a unit as a quilt or collage. While there might be elements of that in Throaty Wipes, any gathering of pieces by the same author over the same stretch of time can’t help but repeat echoes of concerns and considerations. In a 2014 interview posted at Touch the Donkey, Holbrook wrote that “all my poems share some persistent concerns—when writing I think about how we shape and are shaped by language, about how to invite people in to a more intimate relationship with words, how cultural critique can be animated by defamiliarization’s prodding to sensation/awareness.” Through exploring such possibilities, her poems evoke a music akin to the twirls and glottals of Paul Celan, such as the gymnastic features that open “EVEN THE IMPERTURBABLE SPOCK / TREMBLES ON THE EDGE OF A / PLEASED REACTION.”: “In the awkward / silence of outer space, / crickets chirr / on the Enterprise / bridge, whose ambient / sounds of a late March / wetland celebrate / you, Spock, glossiest / blackbird, entering through the / swish basket”