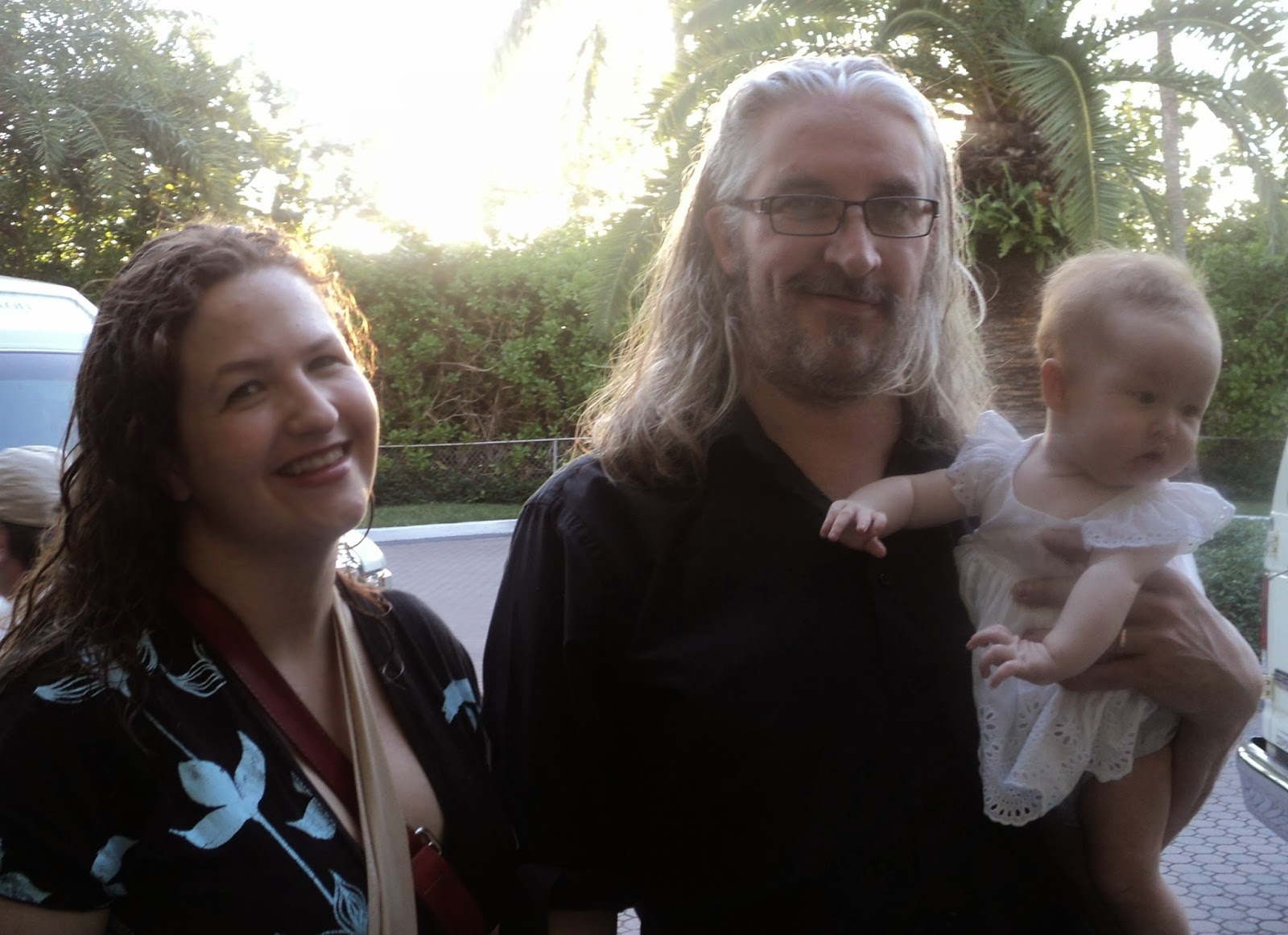 We recently spent ten days is South Florida, spending time at Christine’s father’s condo [see my report on the first part of our trip, here], now back in Canada since Wednesday, late late late; back to the snow and the rain and god knows what else was waiting for us (along with ten days of exciting mail).

We spent days floating around doing lots of little things, lots of little nothings. I managed to get some tricklings of work done, but mostly attempting not to do much of anything. Once Christine’s father returned to Toronto, we managed quiet days with a single daily outing that usually wore us completely out.

We made for the Barnes and Noble for magazines, hit a used bookstore for a couple of finds, went to lunch a few times. The Cheesecake Factory, for example (the restaurant I really thought The Big Bang Theory had invented, until we were here last year), or that place on the beach with the yummy drinks.

We made for the pool, so Christine could swim. We attempted and re-attempted the beach. 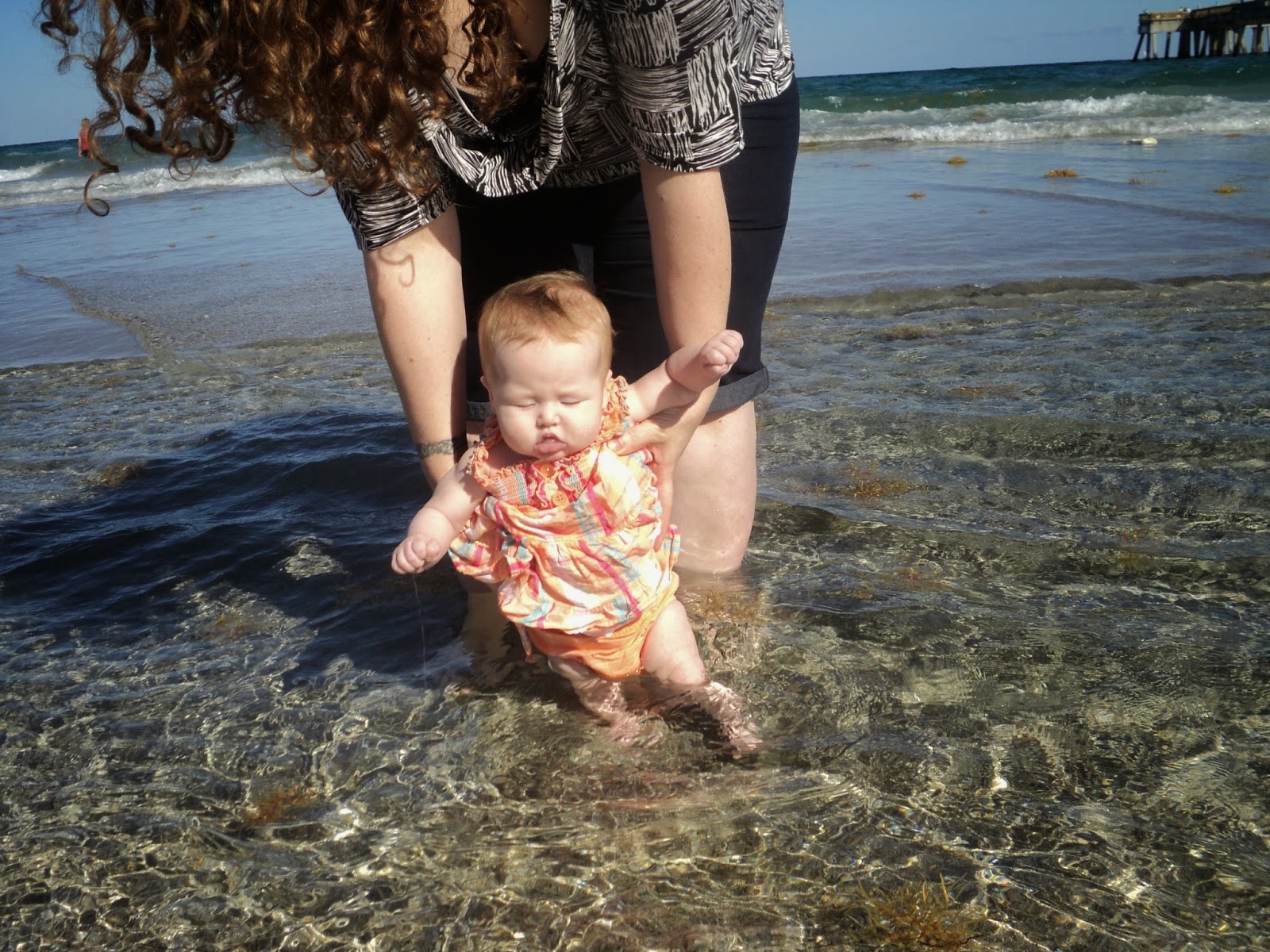 Baby Rose with her feet in the ocean.

Baby means having few outings, and outings predominantly outside of the 10am-2pm range of mid-day massive heat (we didn’t want her to have heatstroke, obviously). And she usually begins settling in for the evening around 5pm. The windows of opportunity for outings are small, and we must aim ourselves very precisely.

We managed to watch the entire first season of Arrow on Netflix. Not nearly as bad as I had suspected (and better, in many ways, than the entire second half of Smallville).

On Sunday, we drove down to the Keys, for the sake of (among other things) Ernest Hemingway’s house, and the great-great-great (etcetera) grandchildren of his infamous polydactyl cats. But be aware: when MapQuest tells you that it’s roughly a four-and-a-half hour drive from Boca Raton to Key West, Florida along Highway I-95, know that it lies terribly (add about two hours to their math), which made for a tremendously long day. 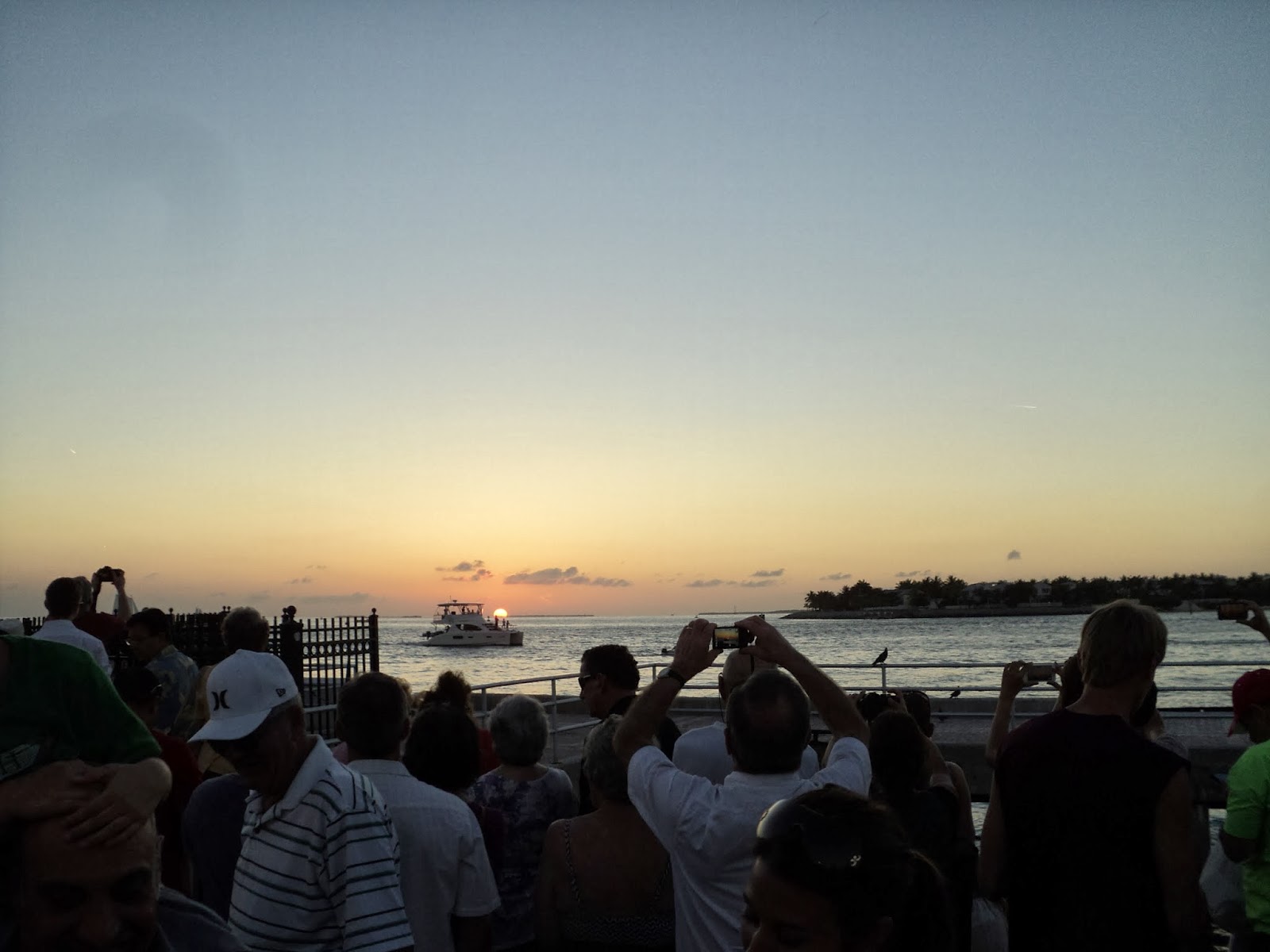 We were too late into the Keys to make for the Hemingway House, but wandered downtown through our hotel shuttle to see what we could see, including the sun sinking slowly into the ocean. We also made it to Sloppy Joe’s (on the recommendation of James Missen), where we took baby for loud drinks and a deeply inappropriate musical duo. The food was pretty good, and the baby didn’t even complain that much (we didn’t stay long).

And of course, Key Lime Pie. And a tourist t-shirt for the baby as well.

After such a long day, the three of us in bed and out well before 9:30pm (which never, ever happens). 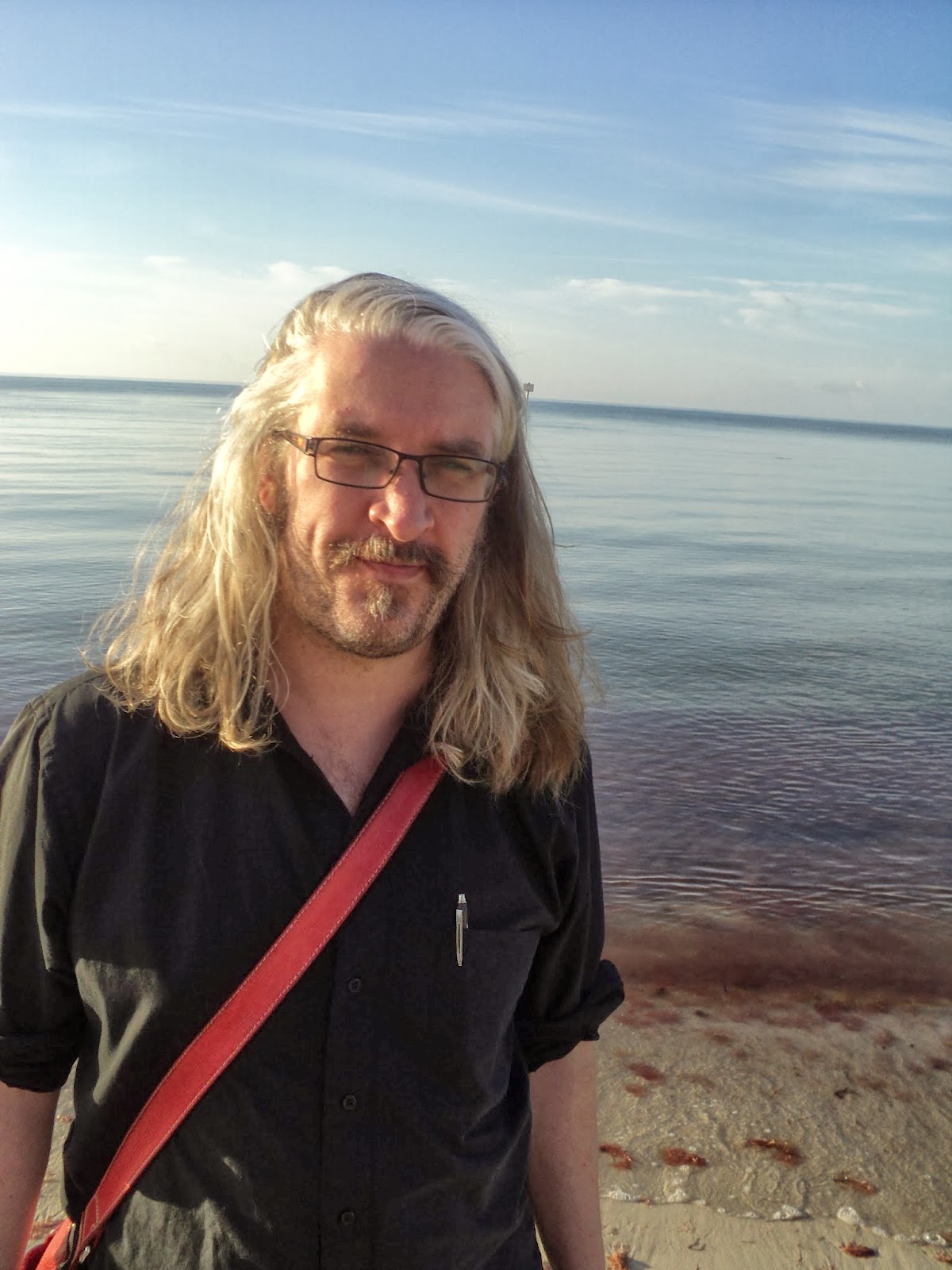 First thing the next morning, we made for the beach outside our hotel, so we could stare south towards Cuba. The sand looked unnaturally clean, and we suspected a constructed beach, the ocean water slowly eroding away until trucks might arrive to replenish.

The cormorants, and the pelicans. Not a human in sight. 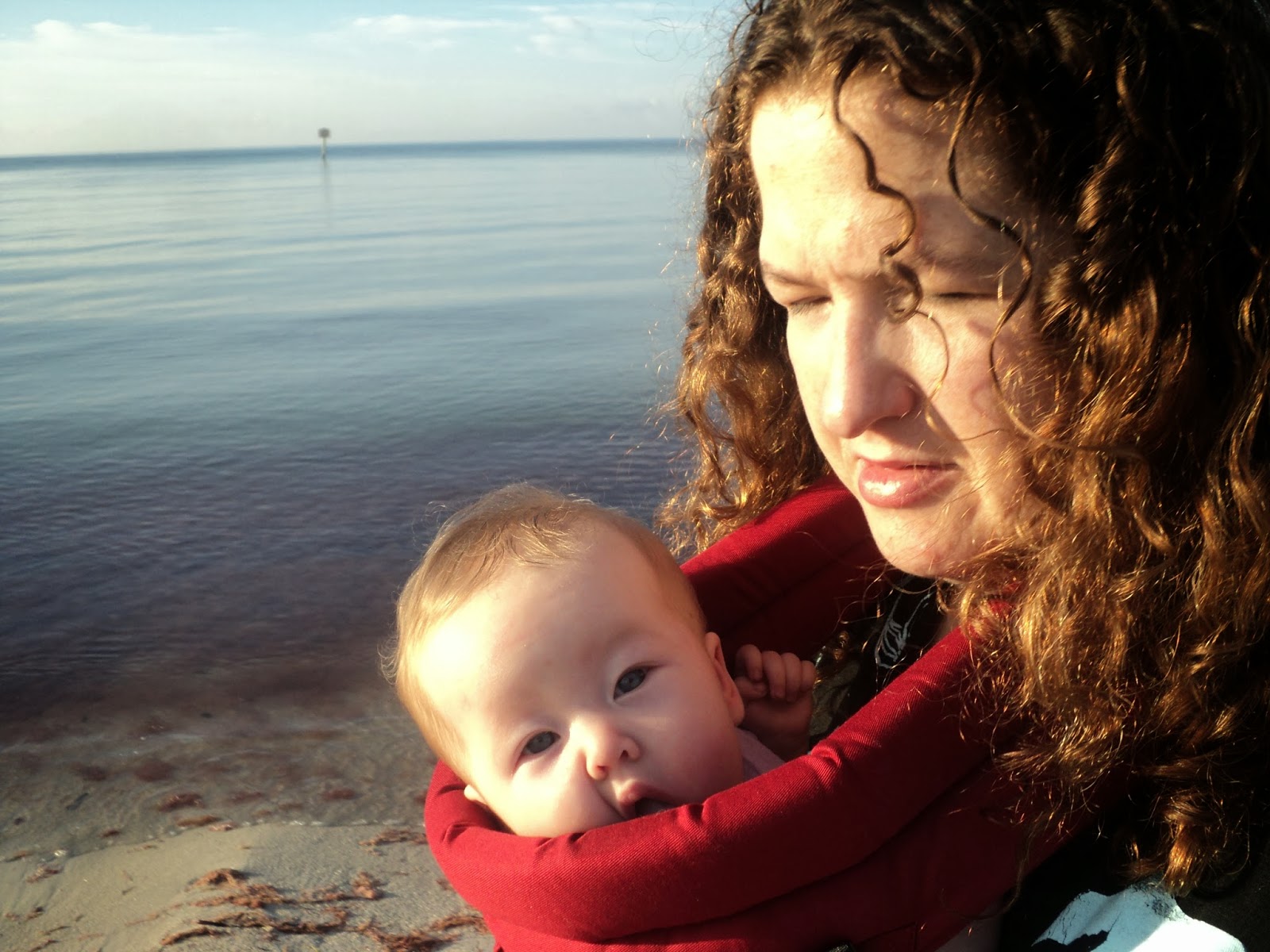 At the Hemingway House, we learned he lived there only during the 1930s, until the marriage with his second wife broke (she lived there for the rest of her life), and his years in Cuba meant that he lost his home, property and manuscripts once Castro came through (manuscripts that are said to remain in Cuba). I wonder, just what have we missed? 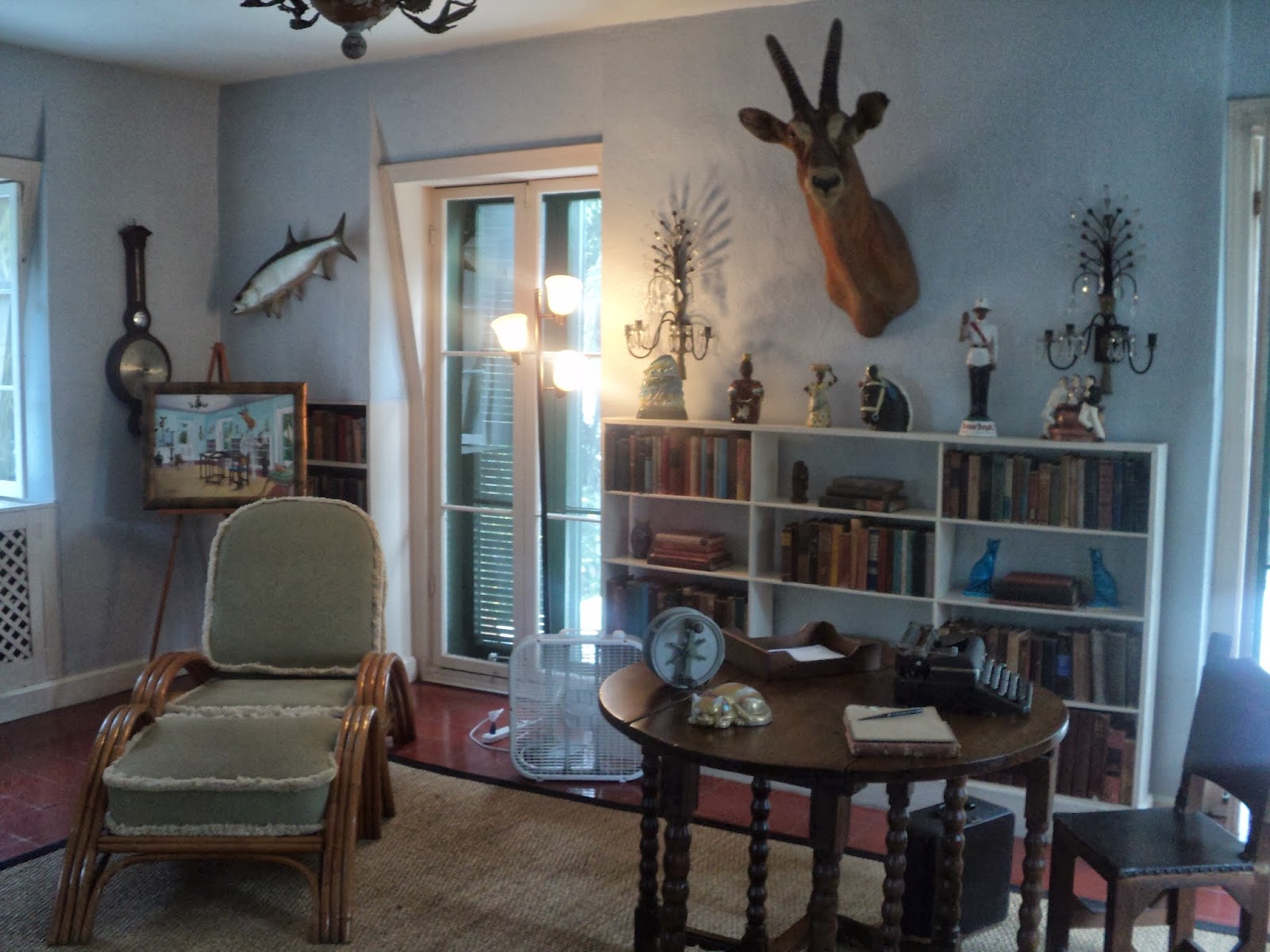 At his Key West home, Hemingway’s enviable and uncomplicated writing studio (which reminded me of the one Brian Fawcett had in his previous home on Palmerston, writing out in the coach house), where he wrote all but the first and last of his novels, which is quite astounding to think about. A room of his own, above where the bookstore now stands. When Papa lived here, the railing he rigged out on the roof so he could commute every morning from the master bedroom straight over to his writing studio, without having to once touch the ground.

Until noon or so, when one of his fishing buddies might arrive.

Imagine: winning the Nobel Prize, most of which was composed in that house, over the space of a single decade.

So now I've been to The Margaret Laurence House in Neepawa, and Hemingway's house in the Keys (I've not yet been to the Burton House). Might they ever open one for Alice Munro? 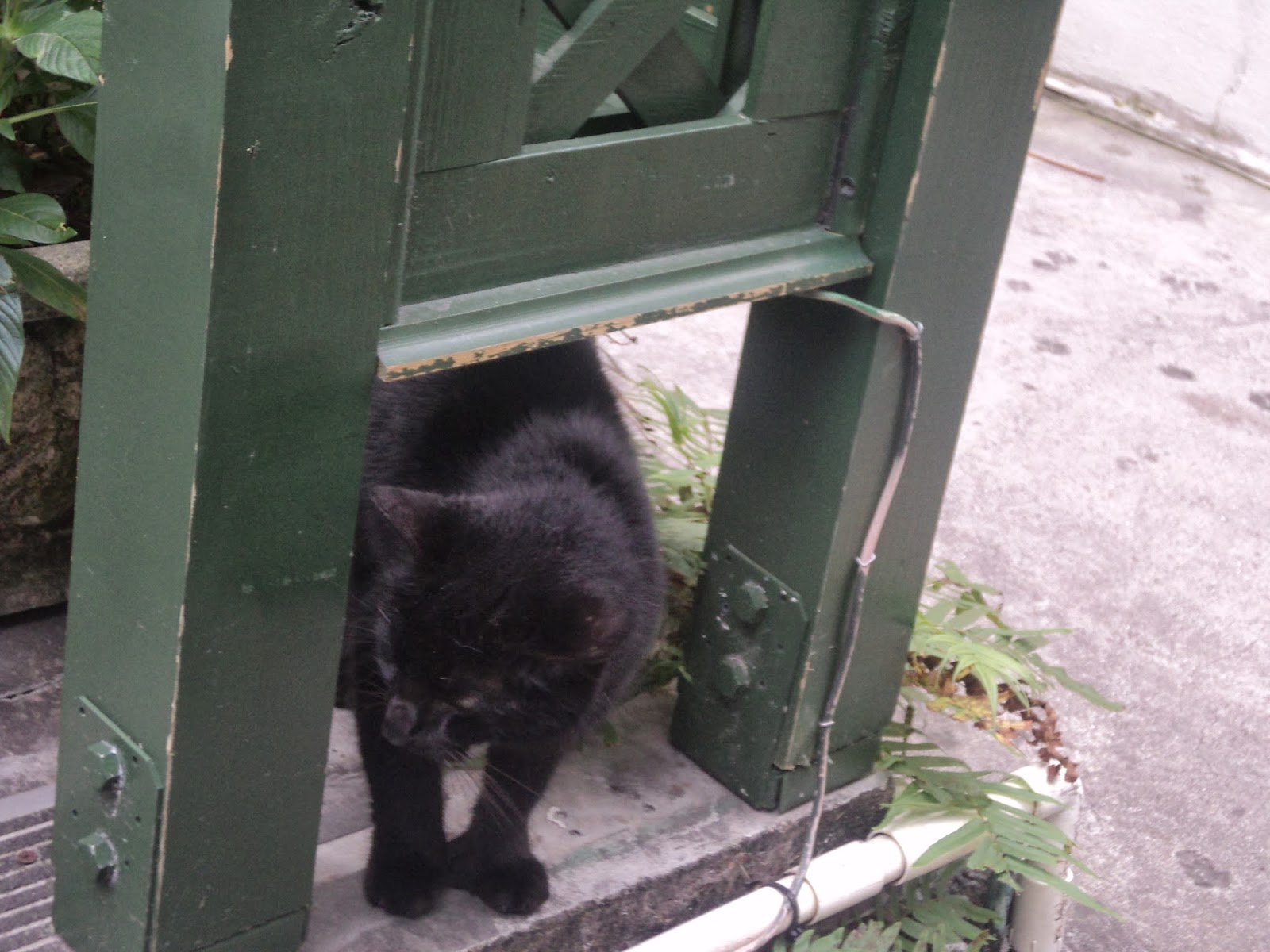 We saw the polydactyl cats, the great-great-great-great (etc) grandchildren of Hemingway’s originals, all distant cousins of our Lemonade. We saw how the cats Clark Gable and Cary Grant didn’t care for each other, and needed to remain separated. We saw the feline Liz Taylor [pictured], who apparently was allowed to have two litters as opposed to the single litter all the other female cats there were allowed (even her namesake in cat form required more than everyone else). 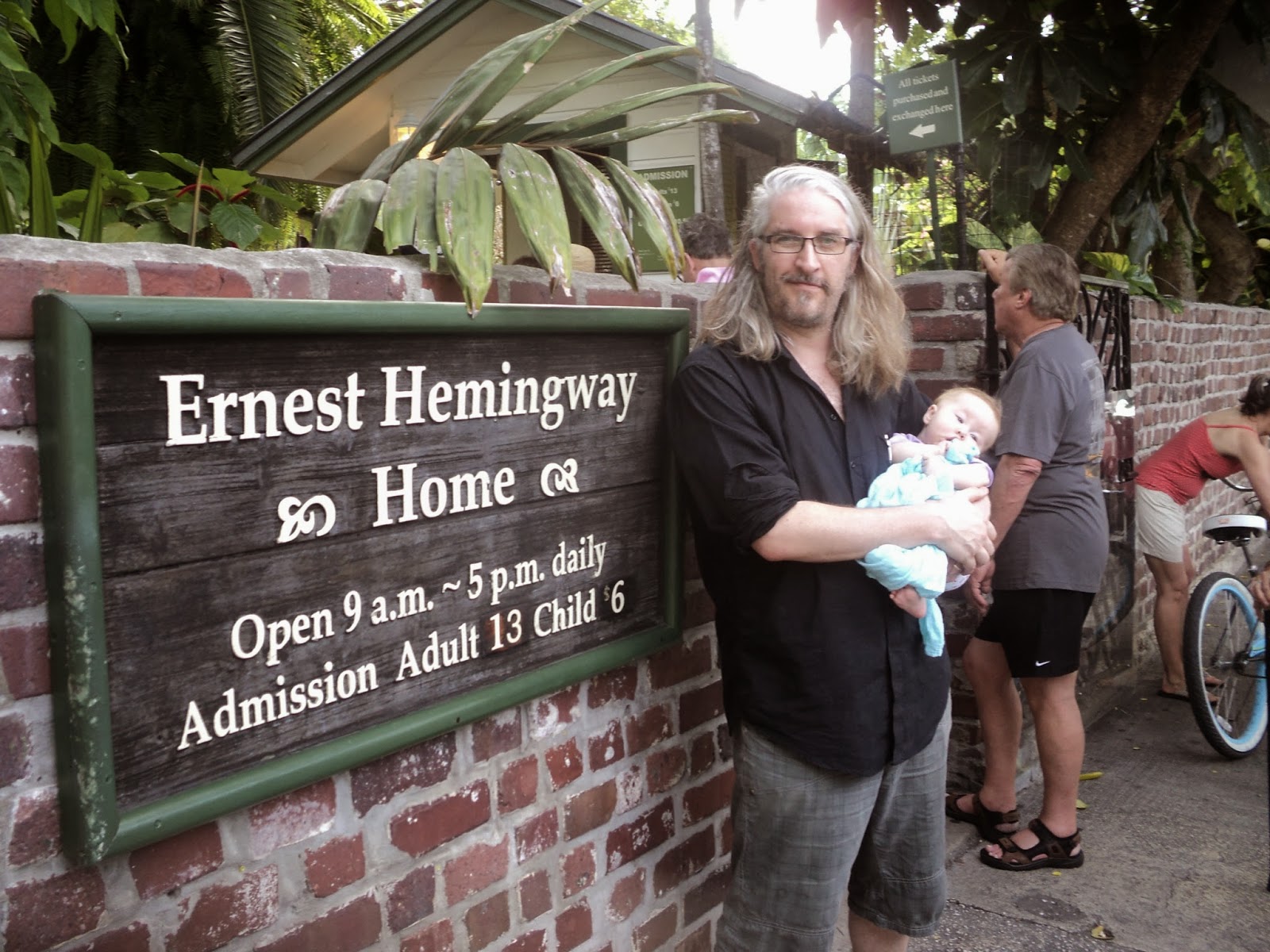 We saw the first swimming pool in the Key, built for Hemingway’s wife, which apparently Ottawa writer Richard Taylor jumped in when he came to visit, years ago (according to Lise Rochefort). 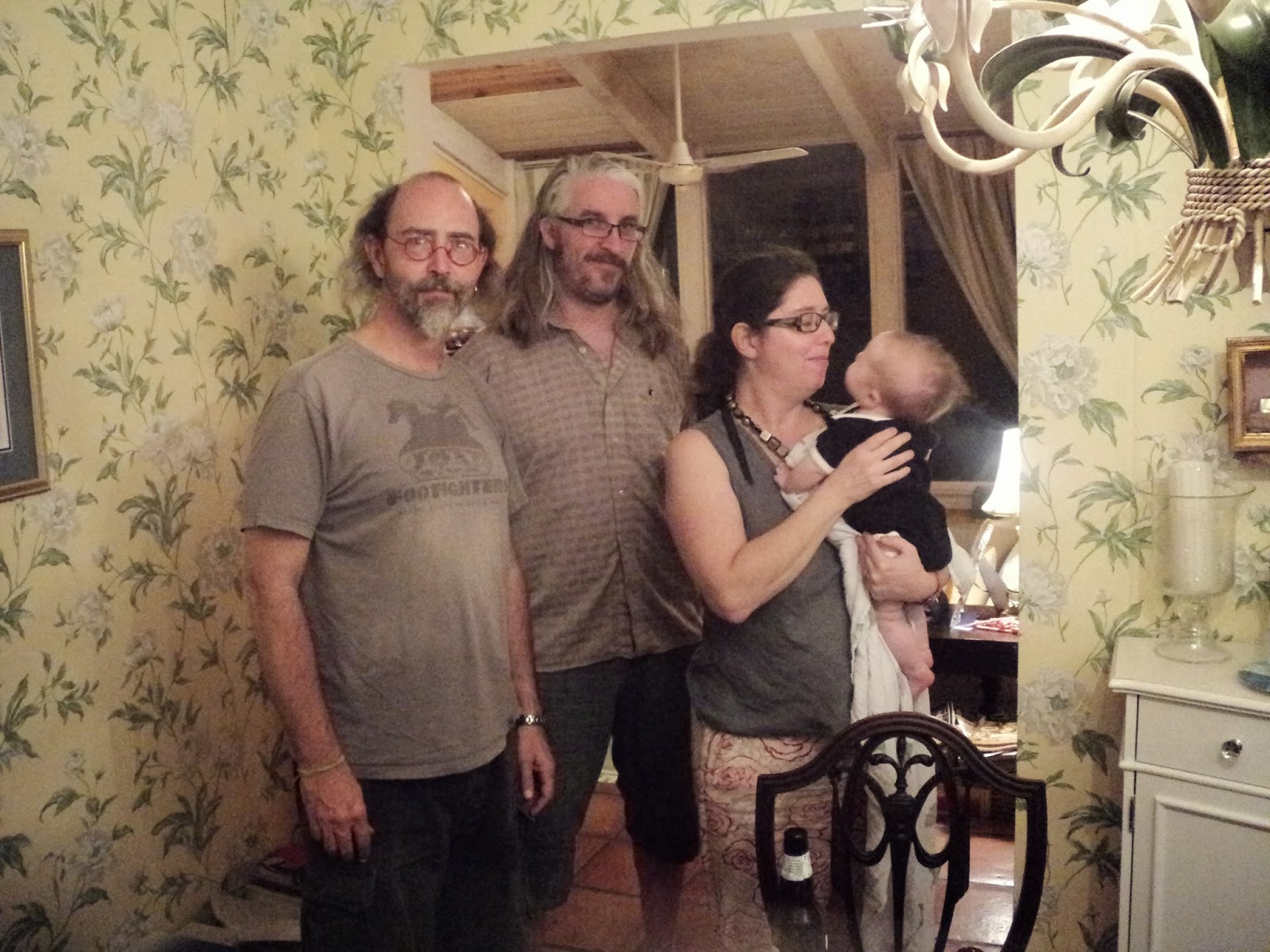 Navigating the toll road (which, again, MapQuest claimed would be four hours) back north, we did make the trip in about five hours, just in time to freshen up and get over to Mark Scroggins’ house to have dinner with he and his wife Jennifer, and their two lovely daughters [as we did last year].

Another six or seven hour drive in two days might have killed us.

Both ways, into and out of the Keys, the local radio station plays songs by The Tragically Hip. Huh.

While there, we had a lovely dinner with the family, as his wife Jen played with Rose for a while (until Rose started to notice she couldn't see us), and their two daughter took turns entertaining her (the younger one played with puppets, which Rose loved, and the elder sang her songs to quiet her town near the end of the evening). I also discovered that Scroggins has a collection of essays and longer reviews appearing later this year, which I’m very looking forward to.

The following day and a half, in comparison, were quite tame: we were all exhausted, and Rose, especially so. We rested, and rested, until we made for the plane.

And then two days in Ottawa before we head out again, for readings we're doing in Hamilton,Toronto and Waterloo (what were we thinking?).
Posted by rob mclennan at 8:31 AM
Labels: Brian Fawcett, Ernest Hemingway, Florida, Lise Rochfort, Mark Scroggins, Richard Taylor