Quanta of light move in waves over the sea, move the sea to the horizon.

Purple is a horizon extending the sky.

It seems not an earth-sky.

To think of attention as moving without trying to be moved to shadow, hepatica, sea, to purple or sky.

Rain falls on the sea and forms a night field of circles glittering idly in moonlight then dissolves into sea surface.

To give attention to what does not exist. 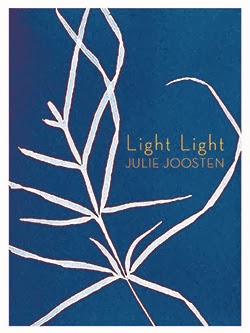 Toronto poet and American expatriate Julie Joosten’s first trade poetry collection is Light Light (Toronto ON: BookThug, 2013), a collection of dense lyrics blended with the attention of essays. Joosten writes on spaces lost, forgotten and otherwise misplaced, or even deliberately obscured. “[S]ecrecy another form / of resistance,” she writes, in the poem “If light stabilizing / If to receive a bee.” The sixteen extended lyrics that make up Light Light sketch out a series of meditative studies on and around small moments, as she writes to open the poem “Ghost Species”: “Henry David Thoreau would describe the seasons, listing // the flowering times of wildflowers around Concord Massachusetts / (1851-1858). // It continues today: the data, the occasional field, the wildflowers, / declining.” The poems in Light Light are small studies in horticulture, sketches of ecologies and exploration of botany, and how any gaze changes both watcher and precisely what is being seen and studied. To describe her poems as “eco-poetry” would do the book a disservice, through reducing a more complex set of structures, ideas and perspectives to something far less. And yet, quite simply, her poems speak to a perspective that becomes irrevocably lost, once we lose sight of what is just outside our window, and the relationships we have with nature. By describing and discussing the world and natural histories, she becomes one of the natural world’s strongest advocates.

Become a room of weather.

The sun coppers the ground. Its angles bring several seasons at once.

The accident of petals quarrying a winter field.

In a valley of wild hive, orange blossom, and honey the sun is silent. Is carried on the backs of horses.

Ferried against the wind.

By sympathy or suggestion I remember what I am. Walking beside a river humming with the dark. (“Once Sun”)

She certainly isn’t the first to work through ecological concerns and/or natural histories in poetry, and some recent examples of works that share Joosten’s ecological attentiveness, striking language and the book-length unit of composition include Robin Clarke’s Lines the Quarry (Richmond CA: Omnidawn, 2013), Brian Teare’s Companion Grasses (Omnidawn, 2013), Ken Belford’s Internodes (Vancouver BC: Talonbooks, 2013) and Larissa Lai and Rita Wong’s collaborative re-issue Sybil Unrest (Vancouver BC: New Star Books, 2013). There have been poetic conversations going back decades about the pastoral, with more recent strains of eco-poetry and other ecological concerns added to the mix, which can’t help but fall deeper into the writing with every passing day. Light Light is a striking, subtle collection of sharp lyric movements that ebb and flow like water, alternately rushing, punching and as soothing as same. Not just light, but lighter, light or lighter than.

The green of the field felt so unforgettable winter could never again exist.

I’d have said in the absence of colour there thought was. The hills bringing the mind not to itself but to the idea of green. To the feeling of sunlight as expectation. The future opened from a circle of snow.

When the valley came to be a valley I was watching winter grasses brown against the sky then green then suddenly in a startling smallness bud to pink. But it wasn’t as peaceful as that. Mud thickened the ground, made it grabby.

It gripped a finch, spit up feathers to write with, took an oak, four kittens, a thunderstorm, and a pair of woolen gloves. Grabbed a man and a woman whole, left imprints like swollen snow angels.

In a place of winter a field emerged, carving beauty’s furrows, entrenching muck-spattered beauty into the valley.