from aluminum sky
into mere photographs

where one’s just dragged off
out of their house

& then this tiny town
gets its quiet going again

first dust scratch
before a diamond needle
tricks into the groove

goodbye pigeons
in the loop

what you can’t hear
is what’s watching you 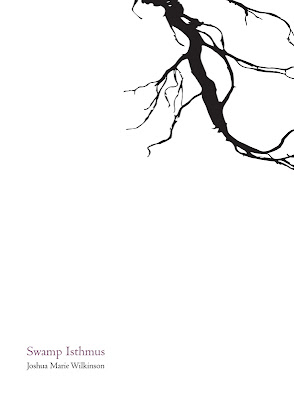 As Maggie Nelson writes as part of her back cover blurb, “bewildered, deep pleasure” is an appropriate phrase when discussing American poet and filmmaker Joshua Marie Wilkinson’s latest trade poetry collection, Swamp Isthmus (Boston MA: Black Ocean, 2013). The second in his self-described No Volta pentalogy, Swamp Isthmus follows “the stripped, lyric voice” of Selenography (San Francisco CA: Sidebrow Books, 2010) to continue a series of stripped threads that we most likely haven’t yet seen the opposite ends of. The author of three previous poetry collections—Suspension of a Secret in Abandoned Rooms (Portland OR: Pinball Publishing, 2005), lug your careless body out of the careful dusk (Iowa City, Iowa: University of Iowa Press, 2006) and the collaborative Figures for a Darkroom Voice (with Noah Eli Gordon, Tarpaulin Sky Press)—the two volumes that now make up nearly the first half of his No Volta articulate a series of abstracts that bleed into each other. How is it that the pentalogy has become a version of the new normal, from Steve Ross Smith’s five-volume (so far) fluttertongue, or the three volumes so far that Erín Moure has translated into English from the Galician of Chus Pato’s projected pentalogy, Method? Wilkinson’s work in Swamp Isthmus continue his trajectory of the serial poem/sequence through seven serial poem-sections, but compose short-lined lyric fragments as opposed to what previously would have been more linear, and even more narrative, in comparison. Wilkinson invokes the musicality of the short lyric, spaces both human and rural (and both), and illuminates the smallest moments. Less than a portrait than evokes an entire, building landscape, the musicality of the line often informs the language, as he writes: “I am sorry I want / a sloe plum” (“A Droplight”), or later on, writing “aspirin uncoils in soda water” (“A Saint among the Stragglers’ Beds”). Throughout Swamp Isthmus, Wilkinson’s lyrics bleed everything into everything else, and the divisions between worlds, bodies, geographies and concepts become impossible to distinguish, deliberately merging threads of violence, magic, pastoral, mail carriers, blood and water. What might the final shape of his No Volta be?

another code fathoms forth
& its messenger at the river

I guide them to a wind
which summons the forest

from a man named Ashley
& a boy he called Small

a fold for disappeared ones