Story of the Raven

The moon was a crescent, her mouth was too. She smiled, put on the red lip, smelt like spice or was it snow? That perfect, or fully present, her cells had no description.

Her face, a face in someone’s shadow, kissed herself for someone’s pleasure, dark tilt of a note turned them over, breathing apace, unkept by history, ‘til times change, people die, and she dripped it out.

Beside the mirror, she rubbed off memory as eyeliner smeared down her silent face, turned blue in the moon-barren night. Her tears had arrived by her own hand, and her hand said, No one will know what I see.

When you are sad you are almost beautiful.

Once there was a raven, the raven fought a giant, the raven pecked at the giant’s eyes, the giant shed a single tear in which the raven drowned. 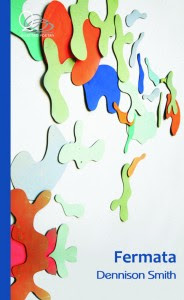 As far as publishing is concerned, Dennison Smith has been quiet for quite some time, releasing her first trade collection of poems, Fermata (Quattro Books, 2012) some fifteen years after the appearance of her first novel, Scavenger (Insomniac Press, 1997), a book I recall quite enjoying at the time. She is also the author of a forthcoming second novel, The Eye of the Day (HarperCollins, 2014), which makes one wonder if she’s been quietly working during the entire decade-and-a-half, slowly carving and crafting in preparation for when her next manuscript might be ready. With a strong narrative slant, Fermata shifts between lyric and the prose-poem, delighting in the musical lilt of each line. Smith’s strength comes from the variety of styles, most of which exist as small scenes (showing, perhaps, her theatre background), but the variety also betrays an unevenness, including poems that might have done with some further tightness. Still, there is something  exploratory about the poems in Fermata, as though Smith is still feeling out the form of the poem, apart from her work in fiction and the theatre, and hasn’t quite figured out what she might be doing with such yet. The best of these pieces actually don’t remind me of poetry at all, but a small book of prose pieces by Czeslaw Milosz, his Roadside Dog (1998), which was constructed out of pieces that blended fiction, poetry and the essay form to create their own shapes. Might Smith simply be circling a form other than poetry?

The joyful, the stainless, luminous, the radiant, the difficult to overcome, manifest, far-reaching, immovable, excellent intelligence, the clouds of becoming, coming.

Yeah yea, I understand these already. Always already, already but not yet, always in the other or always in the one, once that I fell in love, but twice I began collecting being in love.

A man brought me purple mallow whose pollen spread forth in the doubting light, moldered rain, my breasts shaken loose with trembling.

And the overhead bulb gathered up evidence: orange skin, grizzled peel, a dusting of shadows that sank and stayed, bittersweet as blue nightshade, bitter-rooted as twice-over hearts.

We shone in the bulb-lamp, became like white blossoms at midnight; like skeleton bones in the bough pot. Already, always already, always in the one or always in the other, collecting our primitive selves and becoming, one by one then another, some word we devise for woman and man.