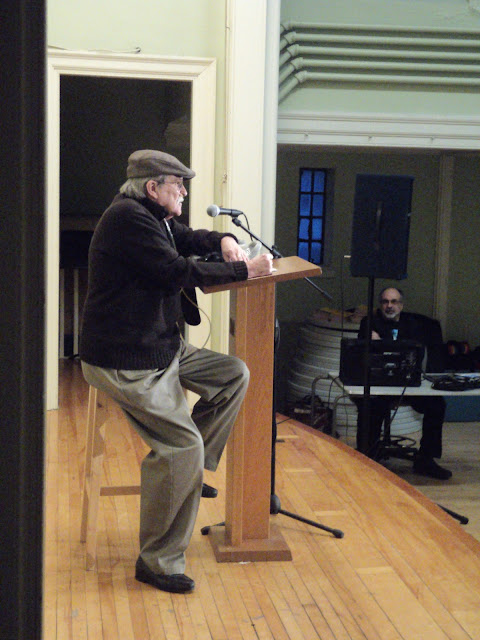 On Sunday,March 17, 2013, VERSeFest inducted William Hawkins and Greg “Ritalin” Frankson into the first annual VERSeOttawa Hall of Honour. I was asked to introduce him, and tweaked slightly the piece I wrote on him for Open Book: Ontario.

Here is a link to a short report (with pictures) I posted on the above/ground pressblog on a couple of the events at our third annual festival. Pearl Pirie and Amanda Earl were also good enough to write up short reports on some of the events as well. The Hall of Honour event included short readings by both inductees. Hawkins’ reading was one of the finest I’ve heard in some time.

Here is what I read as my introduction:

From 1964 to 1974, William Hawkins was a considerable presence in Ottawa, from publishing poetry, composing songs for the band The Children (which included a young Bruce Cockburn), and organizing events at the infamous coffeehouse, Le Hibou, hosting poets, musicians and writers alike, including Leonard Cohen, Gordon Lightfoot and Michael Ondaatje. Since that period of activity, Hawkins has published sporadically, yet has managed to influence the activity of numerous writers and musicians across the country since. Two months away from his seventy-third birthday in May, William Hawkins becomes one of the first two inductees to the VERSeOttawa Hall of Honour.

Hawkins’ exploits are as legendary as they are apocryphal, including tales of facilitating Jimi Hendrix’ recording of a Joni Mitchell performance at Le Hibou on his reel-to-reel (later recording Hawkins performing a new song on guitar at the after-party), a run-in with Mexican police at the Mexican-American border involving a pick-up truck of weed (and Trudeau’s subsequent interventions on their behalf), and a day-long reading at the site of a former hotel in Ottawa’s Lowertown. Another story has Hawkins sitting on stage reading quietly to himself in a rocking chair during a performance of The Children at Maple Leaf Gardens, as they opened for The Lovin’ Spoonful.

Hawkins and Roy MacSkimming raised funds to get themselves out to Vancouver for the sake of the infamous Vancouver Poetry Conference of 1963, asking his friends and enemies alike for money to help him leave town. Once there, he was able to study with and engage with Allen Ginsberg, Robert Creeley, Charles Olson and Robert Duncan, returning home with an Olson edge and incredible energy, producing, reading and publishing, it seemed, non-stop for more than a decade. During that period, his poetry appeared on a series of poetry posters around town, in Raymond Souster’s seminal anthology New Wave Canada: The New Explosion in Canadian Poetry (Toronto ON: Contact Press, 1966) and A.J. M. Smith’s Modern Canadian Verse (Toronto ON: Oxford, 1967). His books include Shoot Low Sheriff, They’re Riding Shetland Ponies! (with Roy MacSkimming; 1964), Two Longer Poems (with Harry Howith; Toronto ON: Patrician Press, 1965), Hawkins: Poems 1963-1965 (Ottawa ON: Nil Press, 1966), Ottawa Poems (Kitchener ON: Weed/Flower Press, 1966), The Gift of Space: Selected Poems 1960-1970 (Toronto ON: The New Press, 1971) and The Madman’s War (Ottawa ON: S.A.W. Publications, 1974). His poems in New Wave Canada sat alongside the work of Daphne Buckle (later Marlatt), Robert Hogg, bpNichol and Michael Ondaatje, who later included his own “King Kong meets Wallace Stevens” poem in Rat Jelly (1973), influenced, perhaps, by Hawkins’ “King Kong Goes to Rotterdam.”

Since then, there’s been a small resurgence of interest in Hawkins’ work, with the publication of a chapbook of recent poems, the black prince of bank street (above/ground press, 2007), as well as the release of Wm Hawkins: A Descriptive Bibliography (Ottawa ON: Apt. 9 Press, 2010) by Cameron Anstee, who also produced the chapbook Sweet & Sour Nothings (Apt. 9 Press, 2010), a “lost” poem from the 1970s, reissued two weeks ago for the sake of this event. Held together as a folio, Wm Hawkins: A Descriptive Bibliography lists Hawkins’ work over the years in trade, chapbook and broadside form, as well as a list of anthology publications. The small folio also includes reissues of the infamous poetry posters of the 1960s.

William Hawkins is not only from here, but remained here, influencing and celebrating the City of Ottawa during a period that had very few poets known outside of the city’s borders, and remarkably few avenues for publication. The plaque we present to William Hawkins includes lines from the fourth poem of Ottawa Poems, that reads:

I present to you, William Hawkins.