saskatchewan in autumn
war & harvest
fields given over to
air basses

& your name
falling unnoticed in
the wake of the threshing crew

this land’s bones
too stubborn for words 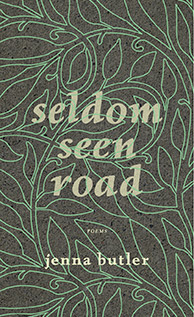 Edmonton poet Jenna Butler’s third trade poetry collection seldom seen road (Edmonton AB: NeWest Press, 2013) is a book of disappearance, as she composes poems on ghost towns, forgotten figures and those who have been otherwise lost. The author of Aphelion (NeWest Press, 2010) and Wells (University of Alberta Press, 2012) as well as nearly a dozen shorter collections [including one with above/ground press, posted online as a free pdf], Butler’s short poems read like pencil sketches, deceptively quick but skillfully formed poems that present the essentials of what each poem requires. Her lines are quick, and require space to stretch out, and know exactly how to make the best of subtle motion. As Andy Weaver once paraphrased Eliot, these are poems that make nothing happen.

Constructed in three sections – “Inbound,” “Lepidopterists” and “The Home Place” – Butler explores less a sense of geography but a sense of grounding against the feeling of being unmoored, tracking and tracing lines that have long faded and been forgotten. It’s as though she grounds herself specifically through these lost and fading touchstones, returning to each of them a strength and purpose simply for reaching out to them.

In the second section, “Lepidopterists,” Butler composes a poem or two each for various historical figures that have slipped just outside of view, including Samuel Hearne’s wife who starved to death, Mary Norton (1708-1728), one of the “Famous Five,” Nellie McClung (1873-1951), Margaret Fleming (1901-1999), Dr. Elizabeth Beckett Matheson (1866-1958) and “The Wives of Crowfoot” (1830-1890), a group of “up to ten wives” of Crowfoot, many of whom have been long forgotten. The poem “Arrowhead Blue” is for “Manitupotis’ Women” (1873), as Butler writes, “Cypress Hills / Southern Alberta floundering under the whiskey trade / Several members of the band led by Manitupotis / (Little Soldier) and his band massacred by American wolfers [.]”

the lupines’ bloom
stills at dusk

The poems in this collection can be described as both meticulously carved and quickly sketched, and the best pieces are the ones that remain shorter, boiled down to their essence, from pieces such as “Inbound” to the sequence “Seven Ways of Leaving.” As the press release tells us, this is “a collection of sharply observed and understated poems about the land and its people,” writing the landscape from not only the ground up but from the perspective of those who have helped in the long-thankless task of building up from what was once nothing. The poem “Alchemist” is written with the sub-title “Writing-On-Stone Provincial Park, 1999,” a site long explored by poets, including Andrew Suknaski and Monty Reid. The piece holds up well against the comparison, and holds within it the entire scope of the collection, writing out loss, absence and discovery. The single-page poem opens with:

your voice
the wind     polytonal over
one stone or another