The one sharp kernel
makes its bitter
seedling.

Seedling
tendered at the end
of the year.

or out
of seed comes
the green aperture, 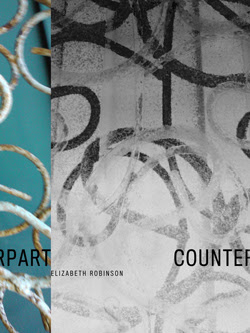 Unless I’ve missed a title or two, with her new poetry collection, Counterpart (Boise ID: Ahsahta Press, 2012), American poet Elizabeth Robinson is now the author of a dozen trade poetry titles over the past twenty-plus years. Since discovering her work nearly a decade ago, I’ve been fascinated by the way her books exist as singular, coherent units, each poetry collection entirely different in structure, tone and purpose to any of her other works, while continuing to develop a series of threads of lyric identity, and questions of portraiture. Her other poetry collections to date include In the Sequence of Falling Things (Paradigm, 1990), Bed of Lists (Kelsey Street, 1990), House Made of Silver (Kelsey Street, 2000), Harrow (Omnidawn, 2001), Pure Descent (Sun & Moon, 2003), Apprehend (Fence/Apogee, 2004), Apostrophe (Apogee, 2006), Under That Silky Roof (Burning Deck, 2006), The Orphan and Its Relations (Fence, 2008), Also Known As (Apogee, 2009) and Three Novels (Omnidawn, 2011) [see my review of such here]. After the extended sequences that made up her previous collection, composed from and out of three Victorian novels, Counterpart returns to the short, individual lyric that made up works such as Also Known As. The collection Counterpart is constructed as a melange of poems and sections of poems that open with a singular, short poem, “TURN,” before moving into shorter sections, individual poems, an extended section titled “The Golem,” and a scattered series of four “Studies for Hell” poems. With trace echoes of some of her previous works, Counterpart plays with what the title suggests, composing pieces that explore comparisons as a study of motion, counterparts, counterpoints, doppelgangers, Golem, twins, the repeated binary and what else the mirror holds.

I told her I wanted to come see her
and she said, Please.

but that she would not be available for a visit.

the spare knife in the pocket

that cuts away space

and time. All this she apprehended.

the new site to which she has moved.

“The lost photograph found again,” she writes, in the poem “DAY,” “become a mirror.” The collection as a whole weaves into an exploration of identity and multiple selves, slipping in an out of various guises, twists and distractions, as in the poem “ONCE MORE (SLEEP),” where she writes: “Death’s doppelgänger / is truth.” She extends this idea in the five page poem/section “DOPPELGÄNGER,” as she opens: “Cure the echo. /// Identical merges with identity: //// one holds in one’s body (Twin, Irony, Narcissus), / like its own // trinket, a name repeated.” Whatever its name, the “other,” her poems suggest, is never as far away as one might hope, and close enough to perhaps have quite an impact. Or, as she writes in the poem “WANDER”: “And so all matter is made of words.” There is such a vibrant energy to Robinson’s lines, composing straight phrases with linebreaks that sparkle and spark across meaning and speed with such an ease as to make any other writer jealous. Elizabeth Robinson is easily becoming one of my favourite American poets.

Whose walls are Golem, who

Thy face, its archaic language
made immobile with
other language

Beauty is vanity’s quackery,
so that the undoing

of the domicile
is its own waxen