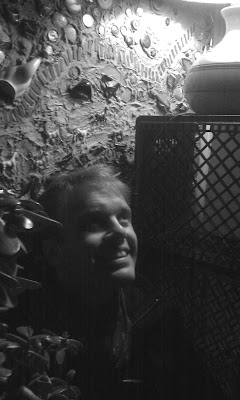 David Peter Clark hopes you’re doin’ okay. It’s tough out there isn’t it? He’d like to tell you it gets better but won't. He’s the author of feathereDinosaurs (A shuffaloff / Eternal Network joint), has been published in House Organ, White Wall Review, and can be read in a forthcoming issue of Rampike.  He also enjoys reading around Toronto and maybe he’ll see you there.

1 - How did your first chapbook change your life? How does your most recent work compare to your previous? How does it feel different?
The process of writing it changed my life because it absorbed focus from other things.  Devotion is a bow with one wonky string.  You want to sing the songs and you’re also, along with the reader, at the back cover.  Feeling great about the poems you also heckle yourself, screaming “Next!”  You throw tomatoes at yourself and eat them, ‘cause hey, delicious nutrients.

2 - How did you come to poetry first, as opposed to, say, fiction or non-fiction?
I’m not sure what was first.  I learned to read with The Hobbit and Shel Silverstein so goblins, dwarves and fantastic places are somewhat responsible.  My mom would load us up with books at Peterborough’s public library so here’s to mom and librarians.  Prepare to roll your eyes! It’s all poetry.  Some writing asks an audience to investigate its rhetorical possibilities, and some writing is banking on an acceptance or a lack of investigation.  And of course there are all the gradations in between... Hmm, let’s just go back and say goblins brought me to poetry.

3 - How long does it take to start any particular writing project? Does your writing initially come quickly, or is it a slow process? Do first drafts appear looking close to their final shape, or does your work come out of copious notes?
Right now the process is one that requires a faith in a channel.  Selecting the channel can, and at times has, taken a year.  A list of the ghosts, the voices, the language that come through could be compiled and listed and there would be some kind of conceptual poetry.  But I tend to use this as ground work.  The poems come quickly at that point.  The “drafts” are bounced off of friends and small changes happen for any number of reasons.  For the most part, when the next poem is being written the earlier “drafts” are now the poems that will wait in a book.

4 - Where does a poem usually begin for you? Are you an author of short pieces that end up combining into a larger project, or are you working on a "book" from the very beginning?
Ha!  Go back to #3.

5 - Are public readings part of or counter to your creative process? Are you the sort of writer who enjoys doing readings?
Part of!  The gradient of the poems’ radiance and amplification corresponds to the eyes and ears earnestly dancing along.  I love to feel shook up in poetry and I’m driven to share that laughter/love as conduit.

Also, “How have the questions I’m trying to answer changed or not changed,” “How can we imagine the fixations we are stuck in, both as individuals and communities,” “How do we shake these fixations,” “How can we work together,” “Do we have to be such intense parasites,” “What’s funny?!”


The common duty of the poet

in this era of massive dysfunction

is to maintain the plant

to the end that the mumbling horde

8 - Do you find the process of working with an outside editor difficult or essential (or both)?
We should definitely be engaged with others.  You hear horror stories from the film world where editors hired by producers dismantle a work to hit a wider market.  I haven’t encountered any worry of anything like this in poetry.

9 - What is the best piece of advice you've heard (not necessarily given to you directly)?
“You ain’t shit” and “You the shit” sung simultaneously.

10 - What kind of writing routine do you tend to keep, or do you even have one? How does a typical day (for you) begin?
I’m trying to get out of waking up in a panic.  I’d like to enjoy mornings more.  Once a book is happening, I’m uncomfortable if I’m not considering the next channel.  I like to at least get a poem done every week. There are certain momentums I enjoy for now.

11 - When your writing gets stalled, where do you turn or return for (for lack of a better word) inspiration?
Questions press me.  There are so many questions covered over by others and they call out.  Inquisitive inspiration screams ubiquitously.

“WTF” gets texted when somebody’s brunch isn’t tasty enough, but that poem’s played out, no? There are endless interesting WTFs.

My writing doesn’t get stalled but it gets squeezed by time allocation.

12 - What fragrance reminds you of home?
A winter air that ain’t Toronto’s.  Rivers.

13 - David W. McFadden once said that books come from books, but are there any other forms that influence your work, whether nature, music, science or visual art?
Music is so important that it demands mention above “everything”.

14 - What other writers or writings are important for your work, or simply your life outside of your work?
All that I can remember form an electric cloud named important writers.  Due to the numbers I’ll tip my hat to the writer/facilitators that set up beacons in the imagined Toronto community I spend much time imagining: Michael Boughn and Victor Coleman; Hoa Nguyen and Dale Smith; Mat Laporte and Brenda Whiteway; Liz Howard, Shannon Maguire, and Fenn Stewart; Leslie and Erik Wexler; Dennis Dennisoff; B.W. Powe; and Jay MillAr.  These are the people around me that have worked beyond their own pieces to encourage fuel for a flickering flame whether through organizing groups, events, workshops, laughing cynicism over food and drinks, maintaining small prints, or an earnest excitement for poetry’s possibilities.

15 - What would you like to do that you haven't yet done?
I’m often struggling with how to do helpful work in this world.

16 - If you could pick any other occupation to attempt, what would it be? Or, alternately, what do you think you would have ended up doing had you not been a writer?
I’m very often struggling with how to do helpful work in this world.

17 - What made you write, as opposed to doing something else?
Goblins!

Right now I’m writing to you in a room with friends watching Tarkovsky’s Stalker.  I wanted to be with people, I have seen the great film many times, and I wanted to respond to you.

18 - What was the last great book you read? What was the last great film?
I recently enjoyed Benjamin Freidlander’s One Hundred Etudes, and Stalker just finished!  Also, throw reverence up for the new books by the above mentioned Hoa (As Long as Trees Last), Victor (IVH), Michael (Great Canadian Poems for the Aged), and Mat (Billboards from Hell).

20 - What are you currently working on?
Eating better, enjoying mornings, a book of poems where the ground work is a sort of conical architecture materialized in linguistic pentacles (and then various voices dance, strut, limp, swim, through it), and getting to meet a larger variety of people.  Nice to meet you rob!