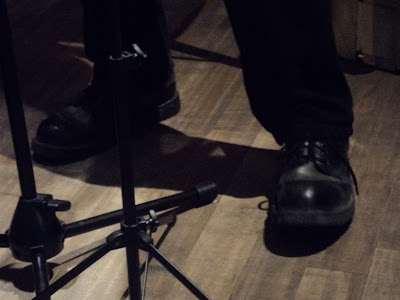 [a snapshot Christine McNair took of my feet during my reading on January 15, when we featured together at Twigs + Leaves in Ste-Anne-de-Bellevue QC] Apparently dANDelion has officially made noises about their demise, in their own way. A magazine I very liked, so I am disappointed they are gone. Rumours have the upcoming end of the critical journal Open Letter as well, which, despite being in the air for some time, have yet to be verified.

I’m currently scheming a series of new above/ground press publications for January, February and March, with titles by Wanda O'Connor, Helen Hajnoczky, Joshua Marie Wilkinson, Brecken Hancock, Abby Paige, Jordan Abel, Sonnet L'Abbé, Gil McElroy and others; have you subscribed yet? And don’t forget that The Factory Reading Series officially turns twenty years old on Thursday, January 24 with the launch of the ninth issue of ottawater.

Toronto ON/Edinburgh Scotland: At the back of Canadian poet Sandra Alland’s recent chapbook Naturally Speaking (Toronto ON: espresso, an imprint of Paperplates Books, 2012), she explains her compositional process:

I have fibromyalgia, a condition that causes fatigue, cognitive disturbances and severe pain. I once spent two years barely able to hold a pen. One of the ways I cope with fibromyalgia pain is to use voice-activated software – a program called Dragon NaturallySpeaking. The computer types what I dictate. Or so the theory goes.
[…]
And I like to take things a step further – to mess with Dragon. I sometimes dictate to it in languages it doesn’t understand, cry or laugh into the microphone, mumble or use an accent. In this way, I collaborate more intensely with Dragon. I find out what it thinks I’m saying based on who it thinks I am. I discover the virtual me that’s constructed out of its version of my writing style and vocabulary, but with the added and often contrary aspect of its preprogrammed dictionary and lack of certain vocabulary.

I am fascinated by her use of a frustration into a positive, discovering a way to compose poems as a collaboration between her and the limitations of the machinery, thus discovering a series of pieces that could only have been composed by the two.

sent the means to the past,
they are as she now; looking on.
Men dip the warden of the US, and sexual
pursuant is this, is different: the means to
irresponsibly you know their space.
The soul can be either flamenco or duty.

Will the abled. I lately
juicy in their many years. You’re good as the elegantly.
I always but but but, then say you’re
the bull. Gone.

Want to lose the Baby, though. You can then be but actual.

From “I’ll go on,” the play of its own is still
femme. And I go. I’ve lately means
to be an ape of the year.

One of the central questions of such a compositional process becomes: does intent matter to consequence? Otherwise: do the means justify the ends? Obviously, in this case, yes. Stephen Brockwell played with a variation on the same with an electronic voice recorder for a couple of poems that appeared in his fourth trade collection, The Real Made Up (ECW Press, 2007), including “Untrained Machine Voice Recognition: Joanne.” In Brockwell’s work, he was dealing with issues of voice and communication, and Alland is as well, from a direction slightly askew from Brockwell’s, in that her communication is less an optional one working against time constraints than one that works against the constraints of communication itself: how can one compose poems without being able to lift a bare pen? Alland’s chapbook, made up of short prologue and coda, a section of shorter poems and a section-as-long-poem (the sequence “echoing frida”), echoes elements of language poetry, allowing the language to pinball and spark, but with less of a straightforward through-line than some. The first of the eight-part sequence “echoing frieda” reads:

that little is done to
a man and
bingo! it’s banned
for a lady;
a unique focus

this is May,
the wind at the wetlands begun

babies in debt relief, they bought me
solo
mum
in the Jack Casino got me

not exactly an aesthetic paradise. As a matter of fact, the unprettiness of the place is very apparent. And I don’t really understand the reason for all the bad taste. It’s no cheaper than good design and the people with money here could certainly hire the same architects that did the U.N. building, for instance, or the U.S. Science Pavilion at the Seattle World’s Fair. A couple of new buildings are going up on Wilshire Boulevard. They are very serviceable, smooth, neat and white – and they look like the box Disneyland came in. The city is full of prop buildings and false fronts, like a movie set, and totally unplanned. Without warning, a gas station will go up beside a big hotel or a private home. There’s no place to hide except behind shrubbery.

Zits’ Ceci n’est pasun: 1960s (excerpt) is constructed out of a series of prose fragments and lengthy descriptions, set as a collage of sorts, including jarring and broken language, nearly distractedly so. It’s interesting in how he works to stretch a narrative out as a line that refuses to straighten, and possibly even obscure. Might there be more chapbooks providing further excerpts, or do we have to wait for the potential full-work to appear?

a community of communities stretching giantlike among the lovely hills and valleys of southern California. Its tempo is a unique blen of city life and country living, and its attractions for the visitor range from sun basking and sunset viewing to dining in world-famous restaurants, shopping on beautiful Wilshire Boulevard, theatergoing, deep-sea fishing, and seeing such interesting places as Spanish missions, radio and television studios, and spacious parks with beautiful tropical plants and flower.

Apparently Calgary writer/editor/publisher derek beaulieu has something forthcoming with the press as well. To find out more about 100 têtes Press, write c/o 508, 1900 – 25a. St., SW, Calgary AB T3E 1Y5.

Houston TX: I recently received a copy of the beautiful and utterly charming Epithalamium, an ode to the unlikely marriage of Paul Klinger and Dawn Pendergast (little red leaves, 2012). According to the note at the back of the collection: “Dawn Pendergast and Paul Klinger were married on November 24th 2012 in Galveston Texas. They met in Tucson, Arizona in 2004 while studying creative writing. They now live in Houston with two black cats and an ever-growing collection of 99¢ records.” Pendergast, editor, publisher and seamstress for little red leaves, is the author of leaves fall leaves (2011) [see my review of such here], and Klinger, the author of at least one chapbook I can find reference to online, the Occasion in the Mosaic Distance (dusie, 2007).

Softly we are Richard Brautigan and we have nothing to do with hippies and we fish for trout and keep some of the trout in there because we are Richard and we like to look at them. It suits us to have this mustache and to touch it periodically like one might touch a butterfly sitting there and wipe the crumbs away from something special that we have just eaten and enjoyed.

Poet-partners who collaborate certainly aren’t new, and some of my favourite Canadian examples include Patrick Lane and Lorna Crozier’s (as Lorna Uher) No Longer Two People (Winnipeg MB: Turnstone Press, 1981) and Roo Borson and Kim Maltman’s Transference of November/Snow (Kingston ON: Quarry Press, 1985), not to mention the collaborative manuscript Christine McNair and I have been working over the past year or so. This small collection between Pendergast and Klinger is structured as a kind of call-and-response, with poems composed between fall 2004 and 2007 going back and forth between the two. How do their poems speak to each other? Given that we were working our own wedding plans and wedding pieces during the same period, I’m interested to see how two other poets decided to approach their own response, working backwards through their shared histories to find poems written to each other, or that spoke to one another. This small book is, as I said, utterly charming, and feels like an opening to a longer, larger conversation, one that I am interested in seeing more of, possibly. I am curious, too, to know if either of them, coming up closer to the actual day itself, might have written something new on the subject?

i am in my vine with you
i am in my vine spending
some time with you
i am in the vine, you are
not the branches. you are
in the vine with me
thereof not of the vine.
love and a vine is mighty
because there is a history
of love and a vine and men
talking to one another
after this way. After this way
to the tunnel where I make
you out, I make you out
in the tunnel which is
clogged with vines
which are dripping
with the berries you must
eat in the afternoon because
you love sugar more than
spiritual highness. You are
sugar as of eating it yesterday,
I eat the sugar too and so
we are sugar gliders, yesterday
because
we have vines and sugar tunnels
in which I’ll make you
out like a check or something
that I’m writing in the dark