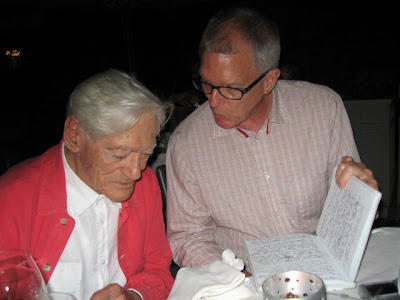 Michael Boughn [a more comprehensive bio exists here] is a poet, scholar, and fiction writer. His many publications include H.D.: A Bibliography, 1905–1990, Dislocations in Crystal, Into the World of the Dead, and 22 Skidoo/SubTractions. He recently co-edited Robert Duncan's The H.D. Book (University of California Press) with Victor Coleman.His most recent title, Great Canadian Poems for the Aged, Vol. 1, is newly out from BookThug.

1 - How did your first book change your life? How does your most recent work compare to your previous? How does it feel different?
Every book is different, because one opens into the next. It’s a kind of journey when it’s working, following that opening. That’s true of both the prosody, or music, which is always specific to the new opening, as well as the concerns and interests that lead through one book and into the next.

2 - How did you come to poetry first, as opposed to, say, fiction or non-fiction?
First there was Ogden Nash: “Further Reflections on Parsley” – Parsley / Is gharsley. How could you not fall in love with poetry after discovering that in your grandfather’s bookshelf? After that there was an anthology of love poetry by the usual suspects in the English canon, from the same bookshelf as I recall. I culled it and copied it for use in various flirtations and would-be seductions in high school. Fiction is pretty much useless in that pursuit.

3 - How long does it take to start any particular writing project? Does your writing initially come quickly, or is it a slow process? Do first drafts appear looking close to their final shape, or does your work come out of copious notes?
I write all the time. I arrange it so that I always have a project in process. I start with an idea for a book and then write out the titles. The titles then become occasion, and the writing occurs around that, out of it and in it, maybe through it, but over years. A kind of temporal accretion, riven through with vagaries of reading and place, layered, a palimpsest that resolves into an event when I finally transcribe it on the computer.

4 - Where does a poem usually begin for you? Are you an author of short pieces that end up combining into a larger project, or are you working on a "book" from the very beginning?
With a title. I love titles.

5 - Are public readings part of or counter to your creative process? Are you the sort of writer who enjoys doing readings?
I love to read new work, but I’m not interested in turning it into some kind of schtick and taking it on the road. Jack Spicer said that you shouldn’t confuse poetry with cable cars. I try to follow that rule. It’s a good one.

6 - Do you have any theoretical concerns behind your writing? What kinds of questions are you trying to answer with your work? What do you even think the current questions are?
My concerns are musical in the sense that Louis Zukofsky defined poetry as lower level speech, upper level music. Anything extraneous to the actual working out of the poem in a confrontation with its emerging language is irrelevant to me, especially “theory.” That is not to say that my reading at any given moment doesn’t intersect with that emergence. But it doesn’t precede it. In the same spirit, my work has no interest in answering questions, as if some question presupposed the work. If there’s a relation, it’s that the work discovers and poses questions, amplifies them, loses itself in them as it moves deeper and deeper into a state of bewilderment, my ideal condition.

8 - Do you find the process of working with an outside editor difficult or essential (or both)?
Don’t know – never really had one, except for my novel, and as it turned out, I ended up doing more work than the editor on that. I do have readers I trust, other poets mostly, who are not afraid to tell me when I have missed a note or lost my way. One of those is worth a boxcar load of pusillanimous editors.

9 - What is the best piece of advice you've heard (not necessarily given to you directly)?
Don’t take any wooden nickels.

10 - How easy has it been for you to move between genres (poetry to critical prose)? What do you see as the appeal?
Quite easy because I see them as connected in a crucial way. I think there has to be a poetics of critical writing - you must begin there – in that condition – it’s essential, otherwise thinking ends up trapped in a machine formation, the answers all there in the vocabulary that already has you pinned down. At the other end, my poetry engages the thinking of critical concerns, especially as they play out in the confrontation with our condition, here, at the collapsing, terminal edge of modernity, fighting for an opening.

11 - What kind of writing routine do you tend to keep, or do you even have one? How does a typical day (for you) begin?
I keep a notebook with me at all times and whenever I have time, I write in it, filling in a line for some title. Often this in a hockey arena or the waiting room of a karate dojo, a parked car, a dentist’s office, or a pub. The day invariably begins with a pot of black coffee and a newspaper.

12 - When your writing gets stalled, where do you turn or return for (for lack of a better word) inspiration?
It doesn’t. I don’t. The idea of “inspiration” was invented by a deodorant company to promote sales of its product.

13 - What fragrance reminds you of home?
Speaking of fragrances . . .. Watermelon sugar.

14 - David W. McFadden once said that books come from books, but are there any other forms that influence your work, whether nature, music, science or visual art?
Movies and TV. Georgian Bay. Charles Mingus.

15 - What other writers or writings are important for your work, or simply your life outside of your work?
In terms of a history that still feeds me, William Carlos Williams, H.D., Pound, Jack Spicer, Robin Blaser, Robert Creeley, Edward Dorn, and John Clarke would occupy prominent positions in my personal pantheon. I can still hear them in every word I write. But I read widely – Henry Corbin, Giorgio Agamben, Elmore Leonard, Jean-Luc Nancy, Ian Rankin, Stanley Cavell, Richard Brautigan, Diane Williams, a host of poets including Victor Coleman, Peter Culley, Joanne Kyger, George Bowering, Meredith Quartermain, Alice Notley are all recent reads – there’s really no end to the list, but you have to draw the line somewhere . . .
16 - What would you like to do that you haven't yet done?
I honestly can’t think of anything. Which is not to say I won’t recognize such an opening when I get there – but how can you know it before that moment?

17 - If you could pick any other occupation to attempt, what would it be? Or, alternately, what do you think you would have ended up doing had you not been a writer?
Painter, musician.

18 - What made you write, as opposed to doing something else?
Chance.

19 - What was the last great book you read? What was the last great film?
Jed Rasula’s Reality Effects: the American Poetry Wax Museum. A terrific book if you are interested in poetry’s recent history. Funny and brilliant. I loved Prometheus, and just saw Looper, which was fabulous. But the real action these days is on television – Luck was amazing, and I am anxiously awaiting the return of Homeland and Justified.

20 - What are you currently working on?
A book called City. The provocation for it came when I was reading Charles Olson’s “Poem 143. The Festival Aspect” where he writes of the “Three Towns” which correspond – as I read it - to three levels of visionary engagement and realized possibility. The text has three parts each of which is comprised of three books, each of which contains six poems. I have the 54 titles – I am working on Part 2 Book 1 right now.