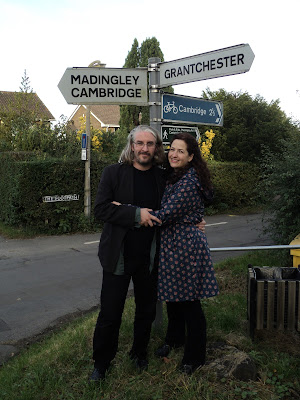 This is one of our honeymoon photos, taken in the village of Coton, on one of our last days. Aren't we lovely?

Today is the fall edition of the ottawa small press book fair! You should totally come by.

So much going on I can barely keep track. My upcoming January – March poetry workshops at Collected Works Bookstore and Coffeebar have a few spaces left. And keep an eye on The Factory Reading Series, whether via the sidebar on the top right, or the above/ground press blog for a number of events and new publications over the next few weeks. And then, of course, the 2013 above/ground press subscriptions are available. Why not sign up?

Ottawa ON: Ottawa poet Marilyn Irwin produced a small chapbook in an edition of eighteen copies for the sake of her Hallowe’en reading at the In/words reading series, little nothings (2012). This is her third poetry chapbook, after her self-published for when you pick daisies (2010; quickly re-issued by above/ground press) and the recent flicker (above/ground press, 2012). In little nothings, Irwin hones her tightly-packed poems into a finer sharpness, boiling down into incredibly compact poems. There is such a lovely quality of her ending poems before they end, writing just short of giving away enough or even too much, leaving entire spaces between for the reader to fill in. The chapbook of ten small poems might be dedicated “for quiet moments,” but the suggestion is deceptive, less quiet than sharp, or flare-lit.

The tumbling tongue-twister of the final poem, “sea sent,” is reminiscent of some of another Ottawa poet, Christine McNair’s, own works, from her trade collection Conflict (BookThug, 2012) or chapbook Notes From A Cartywheel (AngelHousePress, 2011). The words flip and twist but never trip. The words and phrases of Irwin’s short piece highlights a near-gymnastic series of turns, collisions and compactness that spark connections that could never have occurred, otherwise.

In/words reading series host David Currie suggested during his introduction of Irwin that she is one of the Ottawa poets worth watching over the next year or two. I’ve already been saying that for a couple of years.

England: It seems that British poet/publisher Rupert Loydell is still producing his smallminded books, as another small packet of publications appeared in my recent mailbox. The editor/publisher of Stride magazine and the late-lamented Stride Books, these works are deliberately produced as a series of quick handouts. Previous publications through this series were single-author works, with three to five poems per publication, but the new publications, a dozen in total, each hold a poem by Rupert M Loydell, and another by Paul Sutton.

Darkness comes in a loop of dreams,
black paint over the wrong colours.

What lies inside the circle of sleep?
Winter singing and gestures without plot.

Did you see me woolgathering? Did you?
There is one thing missing: love’s true hoop.

I’m intrigued at the distinction, and wonder if the two authors are working their ways up to a particular project, whether collaboratively or otherwise? Is this work a collaboration or is the publication simply side-by-side? Still, the poems are wildly uneven, but the subtleties persist, and the quick publications nearly read as works-in-progress, quickly written, and quickly produced and distributed. I look forward to seeing what form(s) this might next take.

HAUNTING OF THE SECOND HOMER

Washed up onshore. I lay there for a week,
then removed the seaweed and bladderwrack.
Delightful, criss-crossing the town unseen,
sitting in converted chandlers, sipping white wine,
stealing from tables, pushing children over seawalls.
The place I stayed was an old lighthouse,
glowering over the salt marsh. I launched
from the top-rail, landing in mud suction:
hysterical owner screaming as she woke.
The woman wrote a novel, based on my
bullshit messages: copperplate letters
from a wronged housemaid, deflowered,
abandoned – drowning herself in black mud.
I enjoyed the book-launch, hurling pigshit
at the pony-tailed publisher. The granary
location went up like a vodka factory.
Oh Norfolk, you need the arts industry,
my hate destroyed this opportunity. (Paul Sutton)