one more once: for Pierre Coupey’s 70th

rain on the river, that horizontal meander
overwhelmed by the myriad fine
vertical streams, the forest verticals seamed by, streamed by,
fine fluid striations, moving, the eye, like the flying canoe
shooting the hush, the rapids, brushing the colours of water
with those of the bush, warp and woof,
composing a dynamic, a seemingly silent, composition
of paint

a piece of contemplation? intimate in the integration of the
still and the moving, the growing and the decaying, vividly
static, quiet, not likely to jump off the wall, shout Eureka!

memorable—even if I can’t remember just where I put the
prints Pierre once sent me (D.G. Jones) 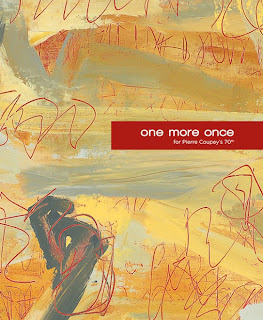 Anyone who has read my posts long enough knows that I’m a big fan of festschrifts, so of course I had to get my hands on one more once: for Pierre Coupey’s 70th (North Vancouver BC: CUE, 2012), edited/compiled by Patti Kernaghan. Writer, editor, teacher and visual artist Pierre Coupey is known predominantly for being an essential part of the Vancouver literary and visual arts scene for decades, including his long involvement with The Capilano Review, a journal he originally co-founded (he also helped found The Georgia Straight). To go onto Coupey’s website gives just a hint of the wide range of his activities over the past five decades, giving some indication of why a book such as this would come to be, to help celebrate his seventieth birthday. With a wealth of contributors, sixty in all, they include a host of writers, teachers and visual artists including Hope Anderson, George Bowering, Lary Timewell Bremner, Judith Copithorne, Brian Fawcett, Brian Fisher, Peter Culley, Maria Hindmarch, Daphne Marlatt, Barry McKinnon, Erin Moure, the late bpNichol, John Pass, Jenny Penberthy, Stan Persky, Meredith Quartermain, Jamie Reid, Renee Rodin, Sharon Thesen, Fred Wah and Lissa Wolsak. One could say that the best way to judge anyone is to see who shows up to their funeral (a rather dark statement, I’ll admit), but a more positive spin on the same idea would be to see who responds and how in a person’s festscrift.

Li Po’s immediate love of the moon
Pierre says driving. We enjoy a long
collaboration (The rain hushed streets of
North Vancouver) of friendship, sharing
the idea of the conversation (to Mac’s Billiards)
its pleasures, complexities, perils.
(dark November night) Also the promotion of
the good nature of everyone (the rain & gleam
of the present) which is the heart
(indelible past) of discourse, politics
& art when (& future gathered, released)
you hear the real words. The person
beside says “Exactly.” Pierre has the poet’s
ear, the painters eye. (our conversation
across the years). He is true to his materials
honouring them (celebrates the fact)
in the things he makes. (We are companions
to the experience—
Li Po’s immediate
love of the moon
is wisdom

Some of the highlights of such a volume include works by rarely-seen poets such as David Phillips and Kate Van Dusen. Phillips had books with Talonbooks so long ago they were stapled, and his last push at publishing was in 1978, when his selected poems appeared with Coach House Books. Van Dusen, on the other hand, was part of Ottawa poetry in the early 1980s (and yes, related to all the other Van Dusens across the city, most of whom appear to work as journalists), with her own title from Coach House Books, before disappearing into the wilds of Toronto, Vancouver and Toronto again. The piece by Van Dusen, I must say, is perhaps the strongest piece I’ve seen by her. What have they been up to, all this time?
Posted by rob mclennan at 9:01 AM
Labels: CUE Books, D.G. Jones, David Phillips, festschrift, Kate Van Dusen, Pierre Coupey, The Capilano Review