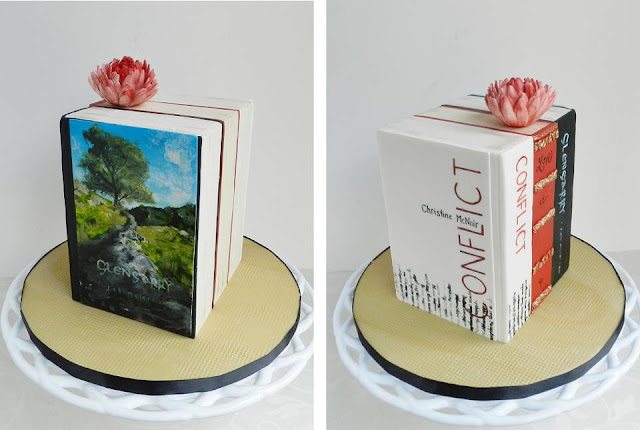 We’re back from the honeymoon, but still in the midst of post-wedding/honeymoon glow. Or is that merely hangover? In any case, we both attempt to re-enter the world, whatever that might bring. There might be photos soon, but god knows when. We have over a thousand to sift through.

In case you didn’t see it, here’s a photo of our wedding cake: Christine’s Conflict on the one side, and my Glengarry on the other, brilliantly made by The Cake Whisperer. Pretty damned impressive. And yes, it was an actual, real cake (we finished the last of it the other night).

Disappointed to see that Snare Books is no longer living the life of an independent press (see Fiorentino's official statement here), becoming instead an imprint of Invisible Publishing. Disappointed, but better they remain in some form that produces books than disappears altogether. When they first started publishing, they were full of vim and noise, and produced some very worthy books. Long live Snare! And then, of course, that more recent news about Douglas & McIntyre...

Also: Cameron Anstee did the most magnificent post the other day on Raymond Souster. Everyone should read it.

Note the number of events on the immediate right, at the top: a couple of events through The Factory Reading Series (November 15 and November 16, as well as a December 15 event TBA and the annual Peter F Yacht Club Christmas party/reading/regatta on December 29) and the ottawa small press book fair, among other things. Keep an eye out, as there are most likely more events to come over the next couple of months. And did you see that two above/ground press titles made the bpNichol Chapbook Award shortlist...?

Montreal QC: In my hands recently comes another publication by Calgary’s NO Press, The Winnipeg Cold Storage Company by Montreal-based Jon Paul Fiorentino, released in an edition of 75 copies in August, 2012. In Fiorentino’s small offering, he continues his fascination with mythmaking and geography, working over, across and through his hometown of Winnipeg, as he does more specifically in the title poem:

In the colophon of the small book, he writes that “The text from ‘Winnipeg Cold Storage Company’ is appropriated and manipulated with the most love from Excitable Speech: A Politics of the Performance by Judith Butler.” There are some intriguing visual pieces in the collection as well, and Fiorentino delights in playing with the modes and structures of others, including education and academia, but it’s the title poem that really stands out, and I’m curious to know how much he borrowed from the Judith Butler text. It makes me curious to see what and where these poems might appear next, and what kind of book-length work this work teases us for. Just where is Fiorentino going?

The question of whether citizenship requires the repression of Winnipeg is not new, but the recent efforts to regulate the self-storage of citizenship within Winnipeg repose this question in a different light. After all, Winnipeggers enjoy some of the rights and obligations of citizenship, but not all of them.

London ON: I’ve long been an admirer of the work of Colbourne, Ontario poet, visual artist and curator Gil McElroy, so am extremely pleased to see the chapbook Ordinary Time: The Merton Lake Propers (London ON: Baseline Press, 2012). As McElroy writes on the acknowledgments: “The Merton Lake poem sequence of Ordinary Time was inspired by the invitation of poet Dan Waber to participate in a project in which a number of writers were asked to create a daily journal entry for the month of November, 2012 which he then published on-line.” The poem itself, a series of excerpts from a much longer sequence, opens with two important pieces of information:

ORDINARY TIME—the parts of the liturgical year
that do not fall in one of the seasons of Advent,
Christmas, Lent, or Easter

For those unaware of McElroy’s writing, this small work ties immediately into his poetry collection, Ordinary Time (Vancouver BC: Talonbooks, 2011), his fourth trade poetry collection, all of which have appeared with Vancouver’s Talonbooks. Time is an essential part of McElroy’s writing, ranging from the cosmic (including an astrological sense of asteroids, constellations and shooting starts) to more human considerations, such as his ongoing “Some Julian Days” sequence that use dates from the Julian Calendar. Time is what he centres the entirety of his work around, highlighting the mundane day to day as magical by turning it slightly, altering its perception.

Bar all terrible saints. Steep them in the storm. There will be a wind. There will be something marvellous half-buried in the south – & unexpected. There will be combat, after all. Ridge directions stare down at an even place & the dry moments forming there. Though out three simple glances. Was a bit dizzy at the bad taste left in my mouth. Thought them out again. Chewed them splendid. Then cut them back.

Rainy boots. Nothing thought of while some news resolved. Probably hopeless. Lively ideas feel me, of course. “Hope so,” I said at the end, so pious & anathema, me. It all strikes me dutiful & such. The morning is competent with sermons dug up for everything. All that, and no doubt then. One gets between symbols, & then kapow!

By night, of course. But enough light dawned. Brick winds large around everything. The road out of places. A couple of thousand snowy silences along the way talking.

The wilderness terribly becomes, now. Sick of it. Mornings I wake up of it. Heavy rain in back of it. It will be too late of it. The lake of of it. I did not return to the right, getting back of it. Each remembered dream let go of it. Really lamentable, but purely mechanical. The 20th century gone astray of it. Very, perhaps. I cannot be sure.

Edmonton AB: For some time now, Edmonton poet Douglas Barbour has been working a sequence of jazz-related poems under the title “Recording Dates” (including the poem “Jane Bunnett plays the Yardbird Suite,” produced as an above/ground press broadside back in September, 2002). Newly out from Jenna Butler’s Rubicon Press is Barbour’s chapbook Recording Dates (2012), a selection of some of these pieces.

Death comes in many guises, a black bird
and a white whale equally partake of the great,
the intense and final prayer,
flower of the atom, atomy of the flower.
Prayer is both response to and refusal of the
great journey now begun, whale and
bird both taking the shortest route possible to death.

Of all the books that Rubicon has produced over the past decade or so, this is easily the most attractive she’s produced, in production and design, and is worth picking up for that alone. As far as Barbour’s work, his poems have always had a quick sense of movement, riffing and bouncing from point to point, idea to idea, so the idea of “jazz poems” makes entirely too much sense. This is a fantastic little chapbook; I love the movement, the flow of the pieces, something Barbour has been exploring for quite some time, but somehow, never quite gets the credit or comprehension he deserves for it.

Perdido: memory gone. That’s how it works. You
salt the mind, still hoping for the real. They got
peanuts for the gig but you got the memory.
All the way back to 1953 and what
the hell happened that night. Those nights. There are some
things you only know by hearsay, yet it’s that story
you heard about ten years later & read about. Those few hours
are part of your memory now – as if you’d been there, listening.
Wee? No it was huge   cool or
hot it doesn’t matter, they tore the
house down for a small crowd soon to grow with telling.
A wonderful feeling, watching that white plastic wave & weave all
night long & the notes pour forth. Heaven-pointed trumpet, everyone
in synch: great music for the ages & you can still hear A Night in
Tunesia every time you place the disc just so.