Right now is what dwindling feels like, despite
the mulberry outside my window steadfastly
anchoring its taproot. The new century counts planets
that might support rooted beings and ravenous predators.
But stardust piles up on lines connecting dots
in constellations, blurring them into nebulae. Shapeless
experience waffles between concrete and abstract, accounting
for the popularity of horoscopes, especially when Jupiter enters
Aries and we vacillate, like volcanoes heaving ash
before the pyroclastic flow, collapsing before tsunami, dwindling
until the next cycle. I abstractly shake dew from ripe mulberries.
Or I lie down, gazing at shivering green tracery non-existent
a couple of months ago and just as soon to vanish.
A more or less concrete cup of coffee balances on my belly,
wobbling to the diastolic and systolic rhythms of my heart.

In her fourth trade collection, Looms (2012), Toronto poet Camille Martin continues her book-length accumulation of poems-as-collage, twisting and turning seemingly unconnected ideas into a single, coherent thread. These are poems of exploration, not always conscious or concerned about where they might end, allowing for a fearlessness that permeates the entire work. In an interview posted November 17, 2011 on Open Book: Toronto, she talked about her then-forthcoming Looms as a collection structurally built as an extension of her previous, Sonnets (Shearsman Books, 2010):

It’s interesting that book projects can seem to take on a life of their own and evolve into what they “want” to be despite original intentions. Before I started the poems in Looms, I had just published 100 sonnets exploring various approaches to the ancient tradition of the 14-line meditations – in the case of Sonnets, meditations on the nature of self, memory and cognition.

Wanting to write longer poems but still under the spell of that book, I started writing double sonnets. But the poems soon broke out of that too-restrictive mould and began telling strange stories that are often dream-like in the sense of being multi-layered and making unexpected shifts. They are still concerned with questions about self and other and about the nature of human thought. However, in Looms I began delving into narrative in relation to the formation of identity from many different and constantly shifting stories.

The image of a loom represents, to my mind, the idea of the complex, interwoven narratives that form the evanescent fabrics of perception and memory. 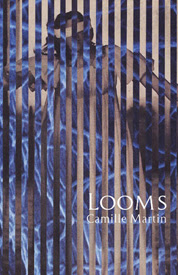 Martin composes “loom” as a weaving, suggesting the motion of looping and swirling a myriad of threads that wrap through and into each other, and her poems do exactly that, written as a series of dream-like movements that continue to riff until each poem concludes. In sixty-two poems, she references windows, nursery rhymes, coffee, dreams, bird migratory patterns and mockingbirds, but the poems are less about the specifics than the movements themselves and the lyric accumulations. She writes of “the tempering passion of mercury,” about how “a tiny pronoun gestates under a full moon,” and of “ukulele seas where mist coalesces.” There is such an expansiveness to Martin’s Looms. The poems exist in that magical place where words, images and ideas collide, creating connections that previously had never been.

Gliding through arteries you arrive naked
and vulnerable at the brink of a cliff. An oracle
dares you to roam faraway lands to learn
whether ballooning junk status can foster social
cohesion or whether Oedipus really needed
to know. Indifference is a country where trees dream
of primitive cells parading to the common ancestor
from which flora that would later look good
on someone’s mantle branched off. Here, a twitch
is a cup waiting to spill. If your evolution begins
at the finish line (which it won’t,
but that’s not the point), jump from the cliff
down a hole to the other side of the earth
and start over again naked and vulnerable
at the brink of a cliff.