There is a framed poster in my father’s house announcing the opening of the Presbyterian Church at St. Elmo on July 20th, 1864. The red brick and steeple stand on the hill just north of what is now the village of Maxville and as their congregation diminished as the population shifted, the church merged with St. Andrew’s Presbyterian Church in Maxville in 1947. The church currently hosts two services a year—Communion and the Anniversary Service—down from the four a year I grew up with. This is my home church and one that still holds Sunday school rolls in the back with my father’s name next to a series of attendance stars; the same building of hardwood, musty floors my sister spends hours cleaning for services. Our September 29th wedding is the third held at the church since 1972 and the first since 1990. The website at Archeion.ca holds a brief history of the church:

The congregation of Gordon Presbyterian Church in St. Elmo, Ontario traces its origins to c.1826 when the Presbyterian settlers in the area then known as the Indian Lands community began construction of a frame church in the 17th Concession. The first minister to conduct services in the church was the Rev. Archibald Connel, the minister in Martintown. In 1838, the Rev. Daniel Clark of Inverness, Scotland, arrived and served as missionary to the area for a year, before accepting a call as minister. In 1844, Rev. Clark and many of the families in the Indian Lands community broke away from the Presbyterian Church of Canada in Connection with the Church of Scotland and joined the Free Presbyterian Church. Disputes over ownership of the church and manse between the two groups continued until 1860 when it was given to the group in connection with the Church of Scotland. As a result the “Free Church” Presbyterians along with the minister, Rev. Daniel Gordon (who replaced Rev. Clark in 1853), began construction of a new church on the19th Concession. This was opened in 1864. The name of this community at the 19th Concession became known as St. Elmo in the early 1880s, and the church became known as the “Gordon Church”. At the time of Church Union in 1925, the congregation of the Gordon Church, St. Elmo, voted to remain with The Presbyterian Church in Canada. 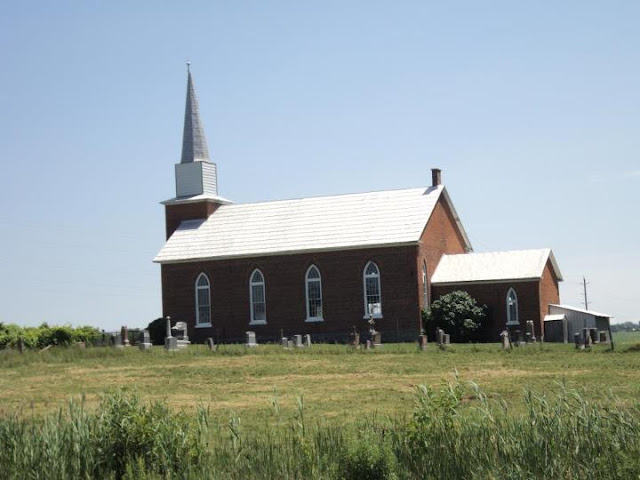 The St. Elmo Church, as well as the 395-acre farm I grew up on, exist on what is known as the “Indian Lands,” a swath that boundaries north from the Ottawa River all the way south to the St. Lawrence, stretching two miles across the border of Glengarry and Stormont Counties. These were large open spaces that would later become parts of the Province of Ontario, but were previously Mohawk lands before they were pushed south by European settlement to end up in the St. Lawrence River at St. Regis. Originally leased by the British for a 99-year term, it was formally “acquired” by the British in 1840 and parceled out as land grants. Some land went to settlers who had been living and working their plots for years and others were settled for the first time. Arriving from Scotland somewhere between 1821 and 1840 with his parents and five siblings, John McLennan received lot 3, concession 7 Roxborough as a land grant in 1845, the same land where my father has lived since he was six months old. For reasons I have yet to determine, John and his family moved next door by 1860, into a farm that was passed down the line to my great-grandfather, and was later run by my grandfather and one of his elder brothers. Upon his marriage, my grandfather John Duncan McLennan lived briefly in the log house across the road from the homestead, before returning to lot 3, concession 7 with infant Douglas in tow. My father has lived there since, in the farmhouse where my sister Kathy and I were raised.

Originally marked out in 1770, Glengarry Country originally stretched all the way north to the Ottawa River, unlike the current northern border just south of Highway 417, making it the oldest county in Ontario and (I’ve heard say) the last in the province to receive telephone service. One of the features of Glengarry is that immigration actually began before the Loyalist surge came north across the American border. When the county was originally founded on what is now considered to be settled by the largest concentration of Scottish immigration in the country, their boundaries also included also the eastern half of Stormont County and parts of Quebec. Marianne McLean, in her magnificent The People of Glengarry: Highlanders in Transition, 1745-1820 (McGill-Queen’s University Press, 1991), writes:

Between 1773 and 1853, close to 3,500 people emigrated to Glengarry County from a few districts in the Scottish Highlands. The emigrants came principally from the districts of Lochiel, Glengarry, Knoydart, and Glenelg, in the mountainous western rim of mainland Inverness-shire. Many of the clansmen of this region had been fervent supporters of the Jacobite cause in 1745; the Camerons of Lochiel and Macdonells of Glengarry followed Prince Charles Edward to bitter defeat at Culloden. All the inhabitants of western Inverness suffered the full effect of the military suppression of the revolt and then endured the government’s efforts to “civilize” the region in the generation that followed.

Maxville came later, invented through the rail line between Ottawa and Coteau Landing in 1881. The new village caused a small radius of hamlets to diminish, some into non-existence, including Tayside, Dominionville, Athol and St. Elmo, which is now only marked by the church building and small cemetery. My father’s maternal grandfather was once postmaster at Athol which was two miles north of St. Elmo and their farmhouse still stands, although Athol itself now no more than a roadsign at the intersection. After the church break-ins at St. Elmo during the early 1980s, the few valuables that were left in the building were removed and placed with the rest in my father’s house. The silver, a clock, this framed poster.

My father holds keys to a padlock most likely older than he is and points to a brick at the front of the church marked by the son of one of the parishioners marked and placed during the original construction. The musty smell that greets you at the door, the smell of a breath held in the building for years, perhaps decades. Every summer, opening the church to air out for upcoming services, the stale winter air pushed out into surrounding fields. Former paint-chipped ceiling suggesting colour long washed white; I remember the remnants of colour, swirling blues and light reds. I could talk of playing the church organ in my early teens, feet pumping pedals to keep the air moving, or singing once or twice in the choir, while wearing my grandfather’s robe. Since I left home at nineteen, a lawnmower engine was adapted to fit into the back of the organ and my father now rents a small generator for the sake of sound and overhead light.

Growing up, I read the novels of Ralph Connor, pen name for the Rev. Charles Gordon, son of Rev. Daniel Gordon, who spent his first decade living with his family in the St. Elmo manse. As Ralph Connor, he was one of Canada’s bestselling authors with sales of over a million copies. Some of his best-known books were composed on the area, written from his early life in the county, from The Man From Glengarry (1901), The Girl From Glengarry (1933) and, a particular favourite, Glengarry School Days (1902), which fictionalised the author’s early years, set around the church and the church hall, as well as the swimming hole at Hugh Fisher’s farm, another mile or two north. In many ways, discovering these books in the farmhouse as a pre-teen offered the possibility of writing. Even if I wasn’t aware of any contemporary writers when I lived on the farm, the fact that a writer had come from the area, writing books on the area and highly successful at that, presented the option in ways that nothing else was. Another novel of Connor’s, Torches Through the Bush (1934), fictionalized some of the story of the religious revivals and conflicts that led to the construction of the St. Elmo Church, based upon stories he had heard from his father. In Royce MacGillivray and Ewan Ross’ A History of Glengarry (Belleville ON: Mika Publishing Company, 1979), they write:

The Rev. Mr. Gordon’s congregation in the old church which we have just described was divided by the controversy, which was troubling Canadian Presbyterians at this time, between the Free Church of Scotland and the state Church of Scotland. Mr. Gordon had been a firm supporter of the Free Church since his student days. When he and his Free Church followers lost control of the old church building, they built a new brick church which has been known since the year of its opening as the Gordon Free Church, near the manse at St. Elmo. For the minister, it must have been convenient to have the manse and the church at last close to each other, but for the children it meant the end of such exhilarating rides to church as that described in the 9th chapter of The Man from Glengarry. The work of building the church was in progress in 1863, and the opening ceremonies were held on 20 July 1864.

So much of the talk of the church is a talk of its origins, and yet so little has been said on what has happened since. A building still used and utilized, a building that still holds like an anchor on the small rise at St. Elmo, deep in the county. In the chapbook-length History of Gordon Church St. Elmo (1988), the late Rev. Wallace MacKinnon provides one of the more contemporary portraits of the church:

At present, Gordon Church Congregation consists of fifteen households and thirty-five communicant members. The financial situation is good and the congregation oversubscribes its allocation for the General Assembly, maintains in good condition the two Church buildings and the cemetery, and gives at least one bursary, and some years two, to theological students from Glengarry Presbytry, amounting to 150-300 dollars a year from the Hugh Cameron Memorial Bursary Fund. In addition, one of the members is giving an annual memorial gift of $500.00 to the Presbyterian College, Montreal, for academic awards or prizes. The church was completely redecorated in 1982. In 1987 five special services were held in Gordon Church: in June, a Communion Service; in August, a Memorial Service and an Anniversary Service observing the 150th anniversary of the Congregational Church built in 1837 and now the Church Hall; and the 123rd Anniversary Service for Gordon Church in September. The Maxville and District Masonic Lodge held a special service of worship in Gordon Church as part of the 100th Anniversary of the Masonic Lodge on the last Sunday of September.

Hello Rob :
I have a old picture of St Elmo - It looks to be wither the late 1800's or early 1900's There are three women standing outside the building - I wondered if I could send to you and see if you could identify them

Yes. can you send me an email? You've left no contact information here: rob_mclennan (at) hotmail.com