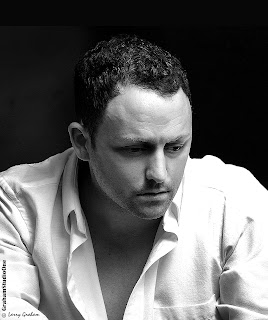 Damon Ferrell Marbut is author of the critically acclaimed novel Awake in the Mad World, the Amazon bestselling book of poems Little Human Accidents and the Stonewall Award-nominated collection Human Crutches. garbageflower is his third poetry title. Stay updated online at www.facebook.com/DamonFMarbut or on Twitter @dfmnola.

1 - How did your first book change your life? How does your most recent work compare to your previous? How does it feel different?
The first published was a novel called Awake in the Mad World. When it finally made print I started acting as a marketer, which pissed me off but was necessary at the time because only small circles in a few North American cities knew of my work and what I was doing. But I met a lot of great people doing the same thing and it became a fine experience. This new book, garbageflower, is a poetry collection. It’s different from my fiction because more and more people are reading my poems. And asking me to read them.

2 - How did you come to poetry first, as opposed to, say, fiction or non-fiction?
I’ve written poems since youth. I was encouraged with this early on. My family moved me around a lot so writing in short bursts became habitual. When teachers took notice, I I felt important creatively and kept with it.

3 - How long does it take to start any particular writing project? Does your writing initially come quickly, or is it a slow process? Do first drafts appear looking close to their final shape, or does your work come out of copious notes?
This question reminds me of a friend who has a PhD in Philosophy from Purdue. Very serious cat. Sweet as hell, but so fucking serious. Straight to the point about everything, even if misguided. One thing he said to me a few months ago was, “yeah, when you’re on a new book, you work really fast.” I never paid attention to that. But all things considered, I’ve never spent more than six months on a book. I used to take notes and apply them to a manuscript, but as I’ve done more work I realized as taste buds change, so does process. For me at least. garbageflower came out as largely the same book, even though most of it was written summer of ’09 and poems were added and/or replaced over the six years that led to me getting ready to send it off.

4 - Where does a poem or work of fiction usually begin for you? Are you an author of short pieces that end up combining into a larger project, or are you working on a "book" from the very beginning?
I know when a book is happening. But to begin either, it’s always been a line or a character’s sound, tone, voice, what have you. I’ll connect with this sense of Other and then go with it. Each book is so different that I think it helps that I’m patient with what comes to me creatively, rather than force it.

5 - Are public readings part of or counter to your creative process? Are you the sort of writer who enjoys doing readings?
Readings I’m comfortable with. I’ve done plenty, in different cities and venues. I do have a few cocktails beforehand usually. My favorite two readings both involved meeting students and answering their questions about the books. Once in New York, the other in New Orleans.

6 - Do you have any theoretical concerns behind your writing? What kinds of questions are you trying to answer with your work? What do you even think the current questions are?
I just don’t think being alive is super serious, and jobs are dumb, and conflict is avoidable, and chaos is man-made, and having money is dangerous, but the pen on page is necessary. It’s so fucking strange to me that I’ve been like this, philosophically and psychologically. But I TRIED to do so much for meaning in my life when younger, and I THOUGHT so much. I’ve learned since I started publishing that I’m just chronicling my life in each book, poetry or fiction. And whatever theories I may have held about existence, they’re getting clarified through each project. I don’t know a damn thing. Never did. I just play puppeteer to dancing words. That’s cool to me.

7 – What do you see the current role of the writer being in larger culture? Does s/he even have one? What do you think the role of the writer should be?
Currently being a writer, in my opinion, means conserving basic principles of communication. Being a “writer” to a lot of people is equal to being a poor mess. Unless you’re doing some tacky political shit, or you’re writing in some entertainment genre that makes a billion dollars at the box office. I still look at being a writer as necessary, and I believe being a poet in whatever form or capacity is precious and vital.

8 - Do you find the process of working with an outside editor difficult or essential (or both)?
One has to find the right editor. When I was first sending out poetry manuscripts, I was tired of sitting on the mountain of good and bad stuff I’d produced. The publisher/editor who picked me up, Peter Jelen at BareBackPress, actually read over the first draft of garbageflower before it was garbageflower, and he liked it but wanted something else at the time. So we ended up developing a relationship that made two other poetry books happen before garbageflower. And he became a great friend because we agreed and disagreed on a lot of shit. I even helped him with some other books he had his hands on. We became partners in the work. So an editor is real and good and lovely. Just gotta get with the most appropriate one for what you’re trying to accomplish. That takes time and searching.

9 - What is the best piece of advice you've heard (not necessarily given to you directly)?
It’s ok to forgive yourself.

10 - How easy has it been for you to move between genres (poetry to fiction)? What do you see as the appeal?
Awesome question. Man, I was told in grad school I couldn’t do both.  And so it was a learning process to turn on and off those brains, until I realized I was misinformed and that I had that ability to do as much of either as I wanted. After that, it was about learning how much time each project required. But writing both, being able to write both that works for the reader (after, of course, it works for me, first), is great because I can push myself on to the page as I feel and know my readers will get it.

11 - What kind of writing routine do you tend to keep, or do you even have one? How does a typical day (for you) begin?
I write when I have something going on in the bean. Otherwise I drink and work and listen to music and smile a lot. I don’t do that “oh, I write four hours a day” horse shit. I actually got in an argument with a cat in Florida about how much he thought I should write. I cut him loose as a pal. Everyone is different.

12 - When your writing gets stalled, where do you turn or return for (for lack of a better word) inspiration?
Beer at the corner store. And I also spend time with friends who I usually don’t see because of how isolated I get.

13 - What fragrance reminds you of home?
I’ve lived in too many places around the country to know that answer. But I was recently in a cabin in the Blue Ridge Mountains and my friend Steven always had bacon and eggs going in the morning. Our windows were always open. So crisp air there, and promising breakfast smells, yeah, that was home for a bit. I liked that.

14 - David W. McFadden once said that books come from books, but are there any other forms that influence your work, whether nature, music, science or visual art?
Musical rhythm affects my dialogue sometimes. Jazz is in my fiction and poetry. Those beats and stories, the nonverbal loveliness, all that. So good.

15 - What other writers or writings are important for your work, or simply your life outside of your work?
James Baldwin is the best writer I’ve read. And I love the gravity, as well, of Marquez. Dorianne Laux writes poems that connect me to sex and earth and challenged divinity and that’s a pretty fucking awesome feeling. To believe and just coast.

16 - What would you like to do that you haven't yet done?
Look in the mirror and be proud.

17 - If you could pick any other occupation to attempt, what would it be? Or, alternately, what do you think you would have ended up doing had you not been a writer?
I thought I was going to be a lawyer for a while, then a professor. Then I realized I detested title chasing and I went adrift and accepted what was ahead. If not a writer, I would have gone into business and voluntarily fallen on a sword.

20 - What are you currently working on?
I’m 35 pages into a new poetry book. And here in New Orleans the ubiquitous “they” is pushing me to keep with a stage play I started a while back. But it’s dark as night, and I don’t feel dark right now, so it’s poems when I get to them right now. Otherwise I’m working on being ok with life happening beyond my control.