The Machine Has Not Destroyed the Promise

Around 1800, the costumed nightmare on the sofa. Dead brides
and mountaineers. For me they are grammatical. Frontier cleaners.
A circle of tickets this freckled body. But I should be untrue to
science loitering among its wayside flowers. Pulled out and shut
up like a telescope. Let us try to tell a story devoid of alphabetic
redundancies. Immortality in technical positivity. If motion
caused a disagreement of any kind we are regarding the same
universe but have arranged it in different spaces. That is to be
the understanding between us. Shall we set forth? 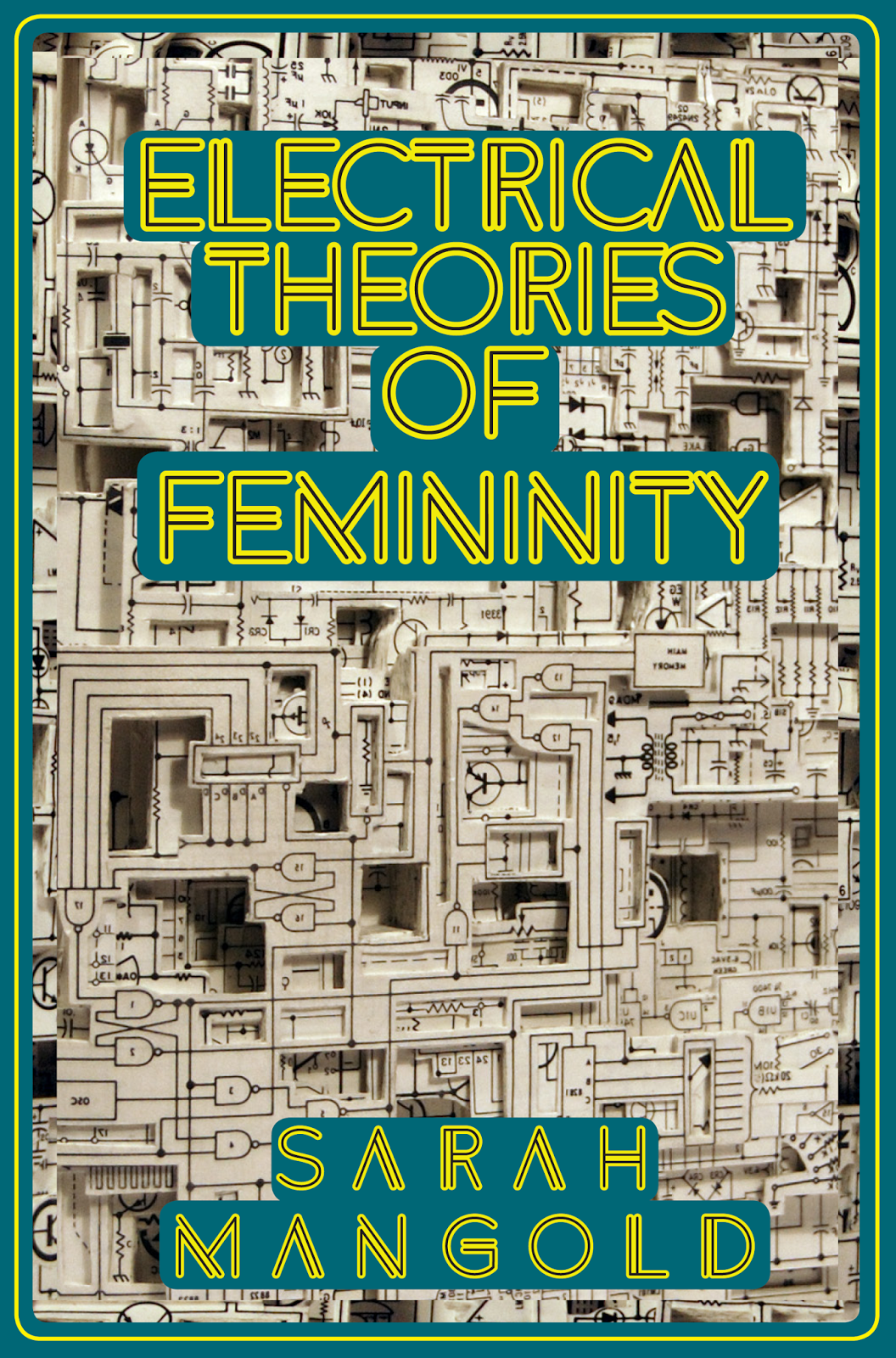 I’ve long been an admirer of the work of Washington State poet Sarah Mangold, so am thrilled to finally see the publication of her second trade collection, Electrical Theories of Femininity (San Francisco CA: Black Radish Books, 2015). The author of a handful of chapbooks (including works self-published as well as works produced by Little Red Leaves, above/ground press, dusie, Potes & Poets Press and g o n g), her first book, Household Mechanics, was published in 2002 as part of the New Issues Poetry Prize, as selected by C. D. Wright. Electrical Theories of Femininity, much of which saw print in earlier chapbook publications, is constructed as an extended suite of short poems and prose-poems writing “the history of media archeology” to explore the place where human and machine meet. In an interview posted in issue #6 of seventeen seconds: a journal of poetry and poetics, she describes the collection as one that “contains three recent chapbooks, plus the shorter poems written around the same time as the longer sequences. There is a bit of connecting sections and selecting what fits and doesn’t fit to make a ‘book.’” She later writes that “For Electrical Theories of Femininity I had three chapbooks to incorporate plus individual poems which led to more movement and structural overhauls compared to the one long poem and several shorter poems in Household Mechanics.”

In poems such as “How Information Lost Its Body,” “Electrical Theories of Femininity,” “Every Man a Signal Tower” and “The First Thing the Typewriter Did Was Provide Evidence of Itself,” Mangold explores how systems are constructed, manipulated and broken down, even as she manages, through collage and accumulation, to move in a number of concurrent directions. Through the collection, the “Feminism” she writes about articulates itself as a series of conflicts, observations and electrical impulses, such as in the opening of “An equally deedy female”: “She gathered up the scattered sheets / a non-geometrical attempt to supply information // about what was far and what was important / bringing it down into life [.]” Throughout the collection, Mangold’s language sparks and flies, collides and flows in poems that fragment the lyric into impossible shapes.

Setting the Landscape in Motion

This is as much an exploration of perspective, authority and various forms of both real and imagined power, composing her mix of fact, language, theory and obvious delight in regards to sound, shape, meaning and collage. As she writes in “I expected pioneers”: “What people forget about the avant- / garde  forwards and backwards. The Pre-Raphaelites wanted / to bring the background forward. The tyranny of perspective / they wanted all views at once [.]” Further on in the collection, she opens the short prose-poem “Mothers Must Always Prove Their Readiness” with this dark bit of information: “Most missing girls are dead girls.” Mangold’s poems might be filled with an unbearable lightness and sense of serious play, yet remain fully aware of, and critique, what women are still forced to endure.

Custodians of a Fractious Country

They are depicted with great scientific suit sleeves

A single faculty, dandelion, don’t get him started

She’s on pasting chunks of text, sewing collars from the wool of country life

But for Spencer evolution was going somewhere

Insincerity in a culture brings to mind the most mysterious numbers

Three volumes of German-language units to say: (blanche your beans, then ice them)

Her parcels supplement mules with shows of sincerity still in combat

He saw American movies fell for them

My stomach was pages and gaiety