As If I Were Anything Before

Not all rocks
are alive. Or
so I’ve read.

Someone I love
is struggling, her thoughts
a coral net.

The pills fail.
Her chakras shatter.
I want to show her

The pine trees looked
lovely as I drove
the treacherous roads.

I’m ill-equipped
for this. I sit
by a fake fireplace

that frames a real flame.
I’ve been crossed
by two crows today. 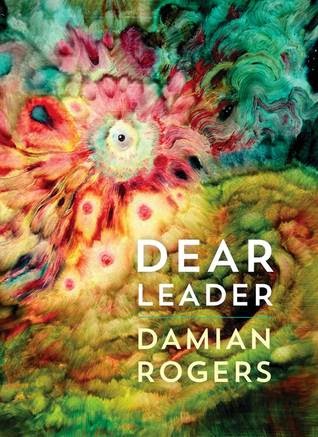 The long-awaited second poetry collection by Toronto poet and editor Damian Rogers is Dear Leader (Toronto ON: Coach House Books, 2015), a collection of poems rife with energy and beauty, observation and tension, writing as deeply contemporary as might be possible in poetry. Dear Leader, which appears six years after her Paper Radio (Toronto ON: ECW Press, 2009), is an exploration of hope, rage, memory, loss and salvage struggling through a series of optimisms, in poems that attempt to capture the minutae of everyday living, whether writing on and around explaining ecology to a toddler, classic albums, villanelles and Mrs. Frank Lloyd Wright, or notes sketching out a series of thoughts and ideas both casual and deep. There is such a curious way that Rogers composes a poem around a thought, stretching and searching across a great distance over a few short lines. “The Book of Going Forth In Glitter” begins: “See the daughters of the screenshot / arrange their arms like / the ladies in major paintings // for an online salon. See them inventory / their makeup bags in popular verse. / What’s worse? My peeling skin // or how my mind shrivels in its cap?” Or “The Black Album On Acid,” that writes: “I’m at the centre of the never- / ending night. // You pull me out.”

Certain poems in the collection exist as short monologues or scene studies, such as the poem “There’s No Such Thing As Blue Water,” that opens: “I’ve been thinking that montage is a mental technique / for accepting unity as a convulsive illusion. I feel sick. / I hate it when my stories have holes, though I suspect / there’s where the truth leaks out. So go back to bed.” Another piece, “Mrs. Frank Lloyd Wright’s Black Lambswool Coat,” opens: “And we were talking about the house / parties where all the guests / try to describe / the milky void [.]” I’m curious as to Rogers’ explorations in prose and the sentence, and wonder if she might be leaning her way towards postcard fiction, easing slowly from one genre into the possibility of another.

Fuck the fourteen-year-old who flirted with my boyfriend. If I’ve turned ugly on the inside, it’s all her fault. Where were you when my love split the planet in two? I knew who would undo me. Did you grab her throat and drag her downstairs? I’ve been betrayed by the boys who sprayed my name under the overpass, the ones who walked me home in a pack, called me their tender pet. This isn’t over yet.

There is a complexity to her poems, and an anxiety that quickly emerges as well, as from someone paying deep attention to the world, but not entirely pleased with what is going on, and occasionally uncertain on the effects humanity has on itself and the surrounding planet, as the end of the poem “Storm”: “We live in / the arteries / of a large / ugly animal / and I saw / it move.” One of the finest poems in the collection has to be her “Poem for Robin Blaser,” composed with such a graceful ease and space of breath, and dedicated to the late, great Vancouver poet. “O,” she opens the piece, “I know your thoughts are with the gods, / so young and loose.” The final couplet of the short piece, both lovely and striking, manages to somehow exist as a distillation of the book as a whole: