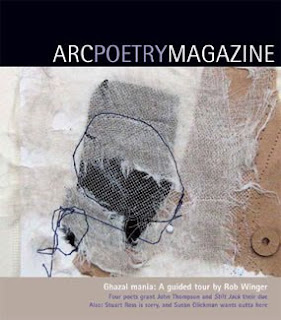 I’m quite taken with parts of Ottawa’s Arc Poetry Magazine #62, including a section of “White Salt Mountain: A Gathering of Poets for John Thompson (Sackville, New Brunswick, November 2008).” I remember hearing of this small conference after the fact, and being quite envious of such, circling around an appreciation of the late British ex-pat poet John Thompson, author of the infamous posthumous Stiltjack (1978), later included in a collection still in print, the Collected Poems and Translations (Goose Lane, 1995), ed. Peter Sanger. The “White Salt Mountain” conference, organized by Janna Graham (the section of such is also introduced by her) includes essays, poems and interviews with Rob Winger, Peter Sanger, Harry Thurston, Amanda Jernigan and Allan Cooper. As Sanger writes in his “Night Sea Voyage: John Thompson,” writing thirty-nine sections for the thirty-nine parts of Thompson’s original Stilt Jack:

None of Thompson’s ghazals appeared in a periodical while he was alive. He did submit the first dozen or so to the magazine Saturday Night. Shirley Gibson arranged for Thompson to meet her friend Robert Fulford, then the magazine’s editor. All three had dinner together in Toronto, probably in 1974. Thompson gave Fulford a typescript of a dozen or so ghazals. Fulford rejected them as “not suitable” for the magazine. Various typescripts of the ghazals, as they developed, were given to friends between 1973 and 1976. Thompson, in effect, increasingly circulated Stilt Jack as a samizdat publication, existing outside the conventional Canadian structure of grants and grant-fed publications. I think he did so with a discouragement which was both dismissive and despairing.

The most impressive part of the section at all has to be the essay by Arc editor Rob Winger, “A brief history of the Canadian ghazal,” taking an overview of how the ghazal entered North America at all, and then Canada specifically, thanks to Thompson and, a couple of years later, Phyllis Webb.

Since its posthumous appearance in 1978, Thompson’s book has been what Lorna Crozier calls a “classic among writers, passed by word of mouth and from hand to hand.” In terms of influence, it’s an earthquake. It shifts the ground of Canada’s lyrical poetics. That’s why Atwood says “certainly for readers of Canadian poetry in the 1970s this is an essential book”; why Ondaatje claims that “John Thompson was our bright, brief star”; and why Patrick Lane enters into shameless superlatives: “No one who reads his life’s work can go away unchanged.” That’s certainly been true for me.

Yet, Thompson is excluded from the mainstream. He’s never been anthologized, and except for the invaluable, pioneering scholarship of Peter Sanger, he’s rarely discussed with critical acuity. Instead, we get myths of the man that obscure conversations about the incredible imagination of his work. In a way, Thompson suffers the same fate as Glenn Gould: instead of talking about technique, innovation,
challenging complexity, microphones placed on strings, couplets placed against traditions, most commentators simply dismiss or celebrate these guys as mad geniuses.

And it is certainly true. In her note on the issue as a whole (perhaps her strongest editor’s note so far), editor Anita Lahey talks about influence, writing “Stilt Jack. It’s a collection that—like, say, Babstock’s Mean, Solie’s Short Haul Engine, or, to reach back a little further, Ondaatje’s The Collected Works of Billy the Kid—is likely to have been read by a significant percentage of the poets toiling in Canada today. ‘In terms of influence,’ writes Arc’s poetry editor Rob Winger in this issue, ‘it’s an earthquake.’” That, too, is entirely true, on the question of earthquakes, although I’m not entirely sure if I agree with Lahey’s first two “earthquake” examples. What of Barry McKinnon’s own I Wanted to Say Something (Prince George BC: Caledonia Writing Series, 1975; Red Deer AB: Red Deer College Press, 1990), another “lost classic” of sorts, said to be an essential prairie influence, despite its original lack of real distribution, influencing a whole generation of writers? That would certainly be a work I’d like to see written about more, in terms of what happened next. I’d be interested to see where Lahey’s specific argument for these first two works might go, had she furthered (I think I might argue, perhaps, for other titles before those, but that might be a matter of different points of style, influence). And I do like that there are (as I’ve complained earlier) some Ottawa poetry book reviews (Richardson, O’Meara, Reid), but is it enough? If one doesn’t get reviewed here as an Ottawa poet, arguably, some might not get reviewed at all; it makes for a worrisome change over the past couple of years, and a question that none of the editors I’ve poked at have really responded to. Still, I’ll leave the last word for Thompson himself, from that infamous little posthumous collection of ghazals:

The word works me like a spike harrow:
by number nine maybe I get the point.

It’s all in books, save the best part; God knows
where that is; I found it once, wasn’t looking.

I’ve written all the poems already,
why should I write this one:

If I weren’t gone already, I’d lie down right now:
have you ever heard children’s voices?

Sometimes I think the stars scrape at my door, wanting in:
I’m watching the hockey game.