12 or 20 questions: with Stephen Henighan 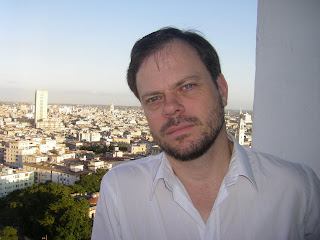 Stephen Henighan is the author of three novels, three short story collections, two books of essays, one travel book, one work of academic literary criticism and one co-authored textbook. He has lived for a few years each in the Ottawa Valley, Montreal, England and southern Ontario, and has travelled widely in Europe, the Americas and Africa. Visit him at http://www.stephenhenighan.com./

8 - Do you find the process of working with an outside editor difficult or essential (or both?)
I’ve had some very good experiences with editors. Seán Virgo edited four of my books for Thistledown Press, and was brilliant at assimilating the books’ voices and characters in ways that made clear to me what I had to do to make them truer. My novel The Streets of Winter, in particular, would have been a mess without his intervention. Seán was also instrumental in helping me to reimagine the ending of another novel, The Places Where Names Vanish. I also had good experiences with the late Robert Allen, who supervised my M.A. thesis, a short story collection. I’ve had some great editors for my journalism, too, like Mark Abley and Bryan Demchinsky at the Montreal Gazette, Terry Byrnes when he was at Matrix, Lindsay Duguid at the Times Literary Supplement, Mary Schedlinger at Geist, and Daniel Baird at The Walrus. But the fiction is always more prickly and sensitive to edit. The writer has to learn to be totally immersed in the work as a writer, then separate from it and see it as though from a distance as an editor. It’s hard, but unless you can cultivate this double consciousness, no editor is going to be able to help you.
9 - What is the best piece of advice you've heard (not necessarily given to you directly)?
Graham Greene: reread at night, and write as soon as you wake up in the morning.
10 - How easy has it been for you to move between genres (fiction to critical prose to creative non-fiction)? What do you see as the appeal?

I retain the belief (in spite of some of what I said in question 7) that the writer is obliged to comment on the environment in which he or she works. In most of the literary cultures I’m familiar with outside the English-speaking one, it’s normal for a writer of novels and stories to publish occasional books of essays or journalism that take a stand on questions of the day. My biggest struggle with the Canadian milieu has been with the way in which the comparatively large amount of attention accorded my essay collection When Words Deny the World erased the public perception of my career as a writer of novels and short stories. Even though North of Tourism, which preceded When Words…, had got more attention than my other books and sold better than anyone expected, suddenly I was “the critic Stephen Henighan.” I got a couple of reviews for A Grave in the Air that opened with comments like, “Isn’t this weird? The critic Henighan has started to write fiction.” The fact that the book’s cover copy made clear that this was my sixth book of fiction made no dent in these preconceptions. The answer to your question is that I find it relatively natural to move back and forth between say, short stories and the occasional book review or article, or to include a creative non-fiction book like Lost Province: Adventures in a Moldovan Family between short story collections like North of Tourism and A Grave in the Air (with which it shares thematic interests), but that our critical and media culture has a hard time accepting this kind of career, and is uneasy with writers who can’t be slotted in a single category.
11 - What kind of writing routine do you tend to keep, or do you even have one? How does a typical day (for you) begin?
I wake up early and I write for two or three hours. Then I go out and do things to pay the mortgage. I come home late at night and read and maybe edit a bit. As long as I can write five or six mornings a week and read for two or three hours a day, I feel that my life is not a waste and belongs to me, not to my employer.
12 - When your writing gets stalled, where do you turn or return for (for lack of a better word) inspiration?
Brian Moore once said that the people who get stalled are people who’ve had to interrupt their writing to do other work. The doubts set in when you’ve been away from writing for a while. As long as it’s part of your daily reality, the words keep flowing. My substitute for inspiration is never to stop writing.
13 - What fairy tale character do you resonate with most?
As a writer, the tortoise in “The Tortoise and the Hare”. As a person, though, I relate to the hare.
14 - David W. McFadden once said that books come from books, but are there any other forms that influence your work, whether nature, music, science or visual art?
I enjoy music and visual art, but I don’t think they have much influence on my fiction. Nature does, in so far as it’s part of the world I move through, and I often evoke nature in my fiction. I see extended travel, preferably on rather limited means, as an art form that complements and enriches my writing.
15 - What other writers or writings are important for your work, or simply your life outside of your work?
Of course there are far too many to mention. I will say that the novelists of 19th-century Russia, 19th-century France, 20th-century Latin America and, maybe to a slightly lesser extent, early 20th-century Britain, have struck particularly close to my heart because they combine comprehensive portraits of changing societies with moments of startling literary innovation. Shadows of these novels escort me every day, which means that they’re especially present when I’m writing.
16 - What would you like to do that you haven't yet done?
Write ten good novels. Have a novel published in hardcover by a major press. Have a novel translated into various languages so that I can return to some of the countries I’ve trailed through as a vagabond in the role of a foreign writer. Drive from Buenos Aires to Tierra del Fuego. Make an overland trip from Luanda, Angola to Namibia. Learn three or four more languages so that I can read more and different literatures in the original and perhaps translate from them into English…. The list is endless. There will never be enough time to do all that I want to do.

17 - If you could pick any other occupation to attempt, what would it be? Or, alternately, what do you think you would have ended up doing had you not been a writer?
If I hadn’t been writer, I would have ended up as backroom operative for an obscure, possibly underground political movement. Either that or an unskilled manual labourer. Neither thought is particularly appealing, and in the end I don’t really want to be anything other than a writer.
18 - What made you write, as opposed to doing something else?
All I really want to do in life is read, write and travel. The other two don’t pay. Neither does writing, of course, but I didn’t know that when I started.
19 - What was the last great book you read? What was the last great film?
The last two great books I read were The Good Soldier by Ford Madox Ford and My Apprenticeship by Maxim Gorky. I’m including the last two since I see fewer films than most people and I’m not sure I’d trust myself to recognize a great one.
20 - What are you currently working on?

I’m writing a novel about a footloose Canadian in Europe in the aftermath of the fall of the Berlin Wall. I’m also putting together a new collection of short stories set all around the Americas, except in the United States. I keep writing, the clock keeps ticking. Some day all this will end.
12 or 20 questions archive (second series);
Posted by rob mclennan at 10:03 AM
Labels: 12 or 20 questions, Stephen Henighan