Vincent Pagé, This Is the Emergency Present

Tonight for example
the verse revolves
in blue

To have lost my voice
and loved her
without stars

I have her in my arms
but do not have her

I write
this the last
endless verse (“Veinte”) 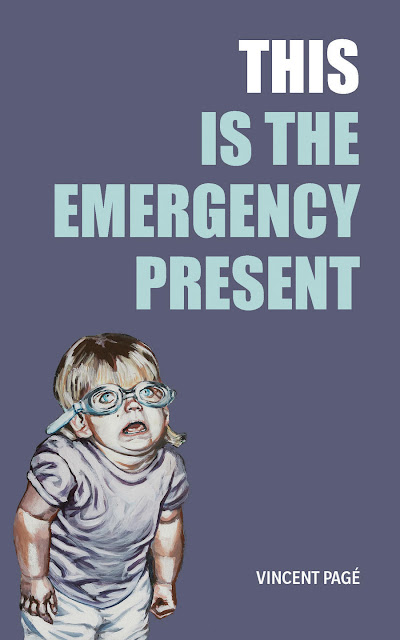 As he writes in his “NOTES AND ACKNOWLEDGMENTS,” the incredibly-precise poems of his opening sequence/section is an erasure: “All of the text in this section was taken from a 1969 copy of Pablo Neruda’s Twenty Love Poems and a Song of Despair, translated by W.S. Merwin. Each poem is composed with only words found in the original poem. The visual poem is the entire book typed out with no spaces, each page laid on top of the previous page.” I’m fascinated with Pagé’s use and utilization of borrowed material, even as he writes that most of the poem titles in the second section “are fragments of sentences taken directly from The Fire Service Manual Volume 1, Physics and Chemistry for Firefighters.” Some of those titles include “A TEMPERATURE IS REACHED WHEN THE / MOLECULES ARE VIBRATING SO MUCH THAT THEY / BREAK FREE OF THEIR RIGID FRAMEWORK,” “EXPAND, WHILE THE OTHER FACE REMAINS COOL,” “IMAGINE TWO SOLID RODS, BOTH THE SAME / LENGTH AND WIDTH, ONE MADE OF WOOD AND / ONE IRON,” and “THE ATTRACTIVE FORCE, OR FORCE OF / COHESION, TENDS TO BIND THEM TOGETHER,” that reads:

Hold the counter as if it’s a branch

high enough to hurt if you fell
Swing your bony legs

Vincent Pagé’s poems display a halting and exacting precision of rough edges, slants and slow accumulation, each of which build around elements of meditative anxiety, some of which seeks out solutions and answers, and some of which acknowledges that such solutions are impossible. “I’m trying everything I can,” he writes, to open the poem “WATER IS FOUND AS ICE,” “to stop giving off heat [.]” Later on, in the poem “DAISY BUCHANAN,” he seems to continue the thought, writing: “The heat tries / to get in / bed naked / reading pirated PDFS / about how life’s existence / can be explained / by thermodynamics / and equations that appear / written in sand / It all seems to be about / energy and communication – / even snowflakes can be / understood to be living [.]”