TO JUPITER AND HIS ORANGE EYE

Craning my neck from your porch swing
I watch the morning glory close her saloon,

right on cue. Would that we were all so consistent,
that we had proper time and place. Something nice

to wink at, off to the side. Observe an expert
introduction to an unbroken horse

before you lay hands on anyone else –
some of us need the peripheral approach,

the fistful of sugar and pressed silver
buckle. When the time comes, I’ll fill

your temple with leather working
tools – everything you need to accommodate

the tamer’s impulse. Slim autumn fashions.
Lend me your shoulder bulk and monocle

squint, let’s read the maelstrom. Massage that crick.
The paper can’t crinkle if we never recline. 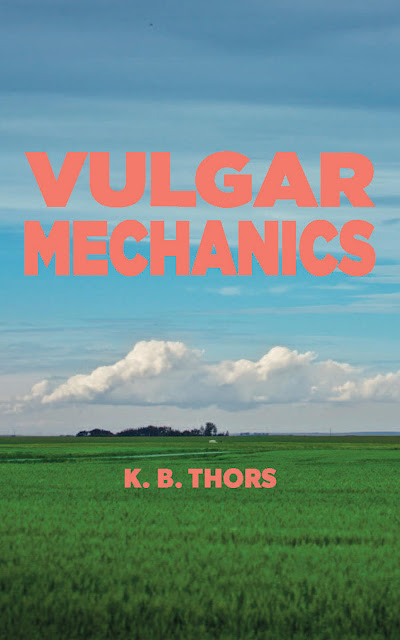 I am very taken with the powerful debut by poet, translator and educator K.B.Thors, her Vulgar Mechanics (Toronto ON: Coach House Books, 2019), an assemblage of tight, fearless lyrics composed of a rigorously and lively gymnastic language. Thors’ poems are physical and unflinching; a sequence of full-bodied lyrics, constantly pushing and punching, articulating a clear-eyed view of the dark spaces of urban coming-of-age, of toxic masculinity and anger, and of just what the body and spirit can endure. “The body suffers no false progress.” she writes, in the poem “SOFT PALATE.”

Her poems are confident and capable, and have some of the most striking opening lines I’ve read in a long time. Thor immediately grabs your attention, and holds it, with openings such as “The only record of that burlesque was the sonnet / we found on the floor, a trampled sheet we tried to preserve / in simple syrup and steel-toed boots.” from “DUNK TANK,” to “I left my nipple clamps at the Chrysler factory / in Windsor.” from “ON THE PLANET OF ALL TIME: TECUMSEH,” and “I can’t promise not to laugh but yes, sir, / I’ll jump your gun.” from “REVERSE COWGIRL.”

This is an impressively confident and capable debut, and Thor’s mix of lyric and prose explorations of the urban prairie and New York City are sharp, stunning and revelatory. I would ask where she came from, but her poems provide.

The rig pig I knew best was a genius. The male teachers who labelled him a problem kid were my cheerleaders – best for bright girls to steer clear of that kind of boy. Unrescued from boredom he became a troubled teen, a walking DUI who intimidated the calculus teacher then went north to work. We met in town every Christmas, he made my little sister laugh by ordering every possible Starbucks modification, extra whip non-fat sugarless double pump. We discussed the news. Quiznos opened again – during the boom it closed for lack of teen labour. Even on a downturn, there’s always money for a guy who can add. Cash for tatts, trucks, drugs, girls. I wonder what else he could have done, how wondering makes me an asshole. When I texted him about the Snowstorm, he replied in a redneck meme: