Robin Richardson, Sit How You Want


SUCH AN UGLY LITTLE DUCK

This morning’s pink ass. Last night’s sadist.
Suppose he came to know me as he wrote
in Sharpie on my belly: whore, or heroine,
or both. I’m no good at sleeping. High-strung
in a hurricane of public access broadcasts
while the city’s men parade their bulges
on the F train waiting to be licked
back into living. This is how a book begins:
protagonist unburdened by her husband
blunders through the belly of a whale.
One day she’ll emerge dismantled, all decked
out in Swarovski Crystal halos. Imperfect,
picturesque as childhood hallucinations.

There is a sharpness and a confidence to the first person monologues in Toronto writer Robin Richardson’s third full-length poetry collection, Sit How You Want (Vehicule Press, 2018), even as the poems explore trauma, terror and powerlessness, and the ways in which one might finally emerge. In an interview conducted by Madeleine Wattenberg, posted at So To Speak, Richardson speaks of “unsympathetic poems,” an idea I found quite fascinating:

The sympathetic poem is crafted in service of the author. It makes one look intelligent or innovative, or, in the case of this “universal” notion you put forth, which I can’t get out of my head now, it makes one seem a masculine sort of authority. I think of all these poems written by white men about the strife of the third world and so on. It comes secondhand and from a sense of the author’s own importance and “seriousness.” It puts nothing on the line, offers up no vulnerability, and does nothing to actually portray the truth of its subject matter, because only the subject, speaking for herself, could provide the “truth” of her experience. It’s somewhat colonial to me, and difficult to digest.

In contrast to this, the unsympathetic writer puts herself on the line, risking vulnerability and exposure of the unflattering angles the sympathetic writer dodges with skill and preoccupation with externals. So, in a world where only the flattering photos are posted, and the easy to digest stories shared, it is a crucial service to one’s fellow to expose the ugly, the sad, the unflattering. It’s in this sharing that we begin to feel less alone.

This is where isolation ends, and empathy, solidarity even, begins. I could go on for pages about the illuminating and healing power of sharing true stories but I’ll stop here with the urge to start listening and asking questions; to start sharing the things that make you feel most unlovable. 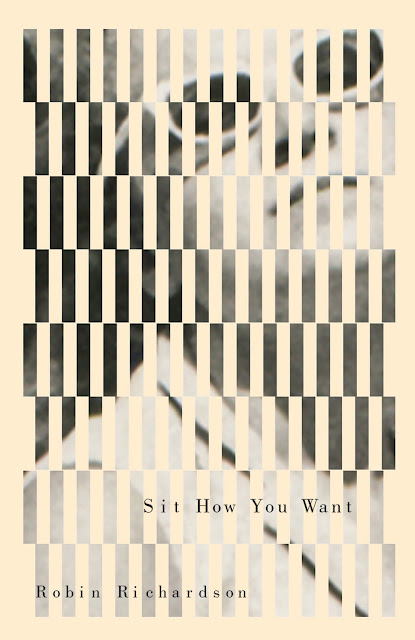 While Sit How You Want isn’t, specifically, a collection of “unsympathetic poems,” the idea is one not unrelated to the poems at hand, in which the narrator/s speak of love and damage, depression and regret, and fearlessness versus fear. As she writes, both in a kind of mocking self-dismissal as well as declaration of being and purpose, in the poem “ABOUT THE SPEAKER”: “I am built of myth and girly bits.” These are poems pushing to break free from abusive relationships, both familial and romantic; poems composed via a narrator (or narrators) that has survived, although not without scars, such as the gloriously-titled “EARTHQUAKES ARE MY FAVOURITE WAY / TO MAKE ISLANDS,” that begins: “We ignored the cries of the carbon monoxide / detector, coitussed in a pose like Pompeii / corpses while the cabbies grew irate outside. / This is the last day of our lives, until tomorrow. / When I say I’m fine I mean the sky has opened / like an old wound under scurvy [.]”

It was love at gunpoint. It was cuffed, diamond-studded-ball-gagged,
that I found my strength. You follow? Break to rebuild better
like the hero in a DC comic’s bludgeoned to the point of brilliance.
Blood’s the best incentive, said the dove, slayed, laying in the hooks
of her beloved. Bellevue mid-march making plans with our hallucinations.
We were stylish in our shared delusion; rings were not enough
we went for ink and more. I can’t complain. It is the thrill of ruination
makes us innovative. I do my drugs, my lovers, with the discipline
of Kung-fu film star choreography.