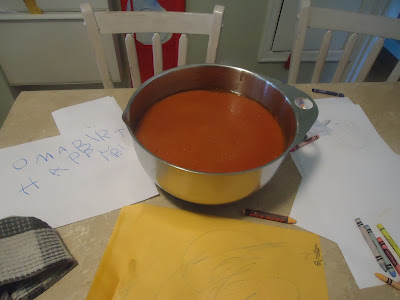 [I made a gazpacho the other day, as the wee girls made birthday cards for their Oma]

I’m behind on everything, but utilizing part of the long weekend to catch up on some reviews. Christine took the girls to her mother’s cottage, allowing me nearly two full days of work. Huzzah!

Working on reviews, short fiction and an essay on the (so far) twenty-five years of above/ground press…

Portland OR: I’m going through Cincinnati poet Caylin Capra-Thomas’ second poetry chapbook, Inside My Electric City (YesYesBooks, 2017), a follow-up to her The Marilyn Letters (dancing girl press, 2013). Gracefully produced as a square, softbound title, “A Vinyl 45,” I like the quiet hesitations in Capra-Thomas’ poems, composed as a staccato series of small gestures, from the observational to the more intimate breath. Given that 2018 sees her as the writer-in-residence at The Studios of Key West, as well as the Vermont Studio Center, where she was awarded a fellowship, I’m hoping that one doesn’t have to wait another few years for a third selection of poems; might a full-length collection be in the works?

THE GIFT OF TRAIN-FLATTENED PENNIES

Toronto ON: Montreal poet (by way of Ottawa) Lauren Turner’s debut chapbook is We’re Not Going To Do Better Next Time (2018), produced by Kirby’s infamous knife|fork|book, a press and bookstore focused on poetry and poets. Another softbound chapbook, gracefully produced, I’m intrigued at the increase in chapbooks produced as softcover, whether YesYes, knife|fork|book or Vancouver’s Rahlia’s Ghost Press, moving a direction separate from the hand-sewn items by, say, Cameron Anstee’s Apt 9 Press, or those presses that hold to the classic folded and stapled. The poems in Turner’s debut write on disillusionment, with both love and the body, and the narrator Delilah, who manages, despite herself, to be completely overcome, writing from that in-between of belief and disbelief, fully aware, or even forced to finally admit, that either is entirely possible.

There was intoxication at first. A love to be regulated
to rooms made dark by smoke and other people’s limbs.
Those are exciting places. Where nights go to stagger.
Hours drain away with the lowballs. They’re pressed close
as twinned thieves, magnetic in their newness. He’s soft
with the hands and god his neck smells good. Buoyant in gin,
in hunger, she needs it all to kill so delicately. They meet
on a Sunday and left their phones for dead, no sick notes
forged to bosses or paramours. A love to repel outward.
They cluster in his bedding like a shared lung until dusk
air expels them. Mornings spent picking the bones of his
cupboards, whiskey in nescafé. The world, a silhouette
on the curtains. Delilah washes her dress in bath water.
Wants to wear what he does. Mimics her lilac hair
into a man bun and laughs. It’s so nice, everything.