Gary Barwin, No TV for woodpeckers

remember the thrum of blood
your body the colour of eyelids

mom the rush of wind
in the ridges of the ear

mom and dad
you curl up in my hands

Hamilton writer, composer and editor Gary Barwin has been on quite a roll lately, receiving a grand amount of attention and accolade for his latest novel, Yiddish for Pirates (Penguin, 2016). The latest in his long line of poetry titles is No TV for woodpeckers (Hamilton ON: Wolsak & Wynn, 2017), produced as part of editor Paul Vermeersch’s Buckrider Books imprint. Opening with a sonnet on blackbirds (one that, possibly, suggests an extra way of looking at a blackbird, beyond Wallace Stevens’ classic and endlessly-reworked “Thirteen Ways of Looking at a Blackbird”), No TV for woodpeckers quickly establishes itself as a collection of poems thick with detail, distraction and play, constructed, if not to unsettle, but to keep the reader slightly off-balance, albeit through rhythm, chants and repetitions. This book requires attention, one that requires the reader to dig deep into the quick repetitions, the variations on sound and play, and thrums and twists of both language and meaning. As the opening poem, “Not,” writes:

In fourteen lines, Gary Barwin argues, in his own way, for a completion of blackbirds. Take that, Wallace Stevens. Barwin’s work has long been associated with that of Stuart Ross, along with a whole slew of “Canadian surrealists,” and much of Barwin’s ongoing work circles around the surreal, bad jokes, quirks and twists, as well as the physical and emotional landscape of his hometown and domestic of Hamilton, Ontario, where he and his family have lived for years. The surreal, one might argue, is as much an element of what he does in his writing as means for his writing to actually be surreptitiously doing something entirely different. Any conversation on his writing should include surrealism, but shouldn’t end with such. 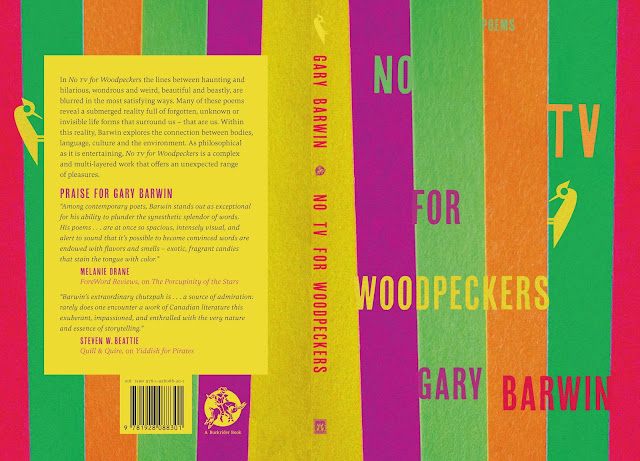 After the initial sonnet, No TV for woodpeckers moves into a small handful of poems playing off rural or small town “field guides,” including Hamilton-specific pieces such as “The Birds of Hamilton, Ontario,” “The Fish of Hamilton, Ontario” and “The Snakes of Hamilton, Ontario,” the first of which opens: “we are for the chuck-will’s-widow / the horned grebe / the fulvous whistling-duck / for looking directly into the semi-palmated plover / for the shearwater / for the lazuli bunting [.]” Thick with sound and description, there have always been two sides to the Gary Barwin poem: the straightforwardness of what the right hand is showing you, and the twists of what the left hand, alternately, is doing. The right hand exists, in part, to distract away from and counterbalance the left.

I do find it interesting how both Barwin and Ross have centred books and/or chapbooks around specific animals, from this current title with multiple poems and references to woodpeckers, to other Barwin titles wrapped around baboons, porcupines, parrots and multiple other waywards beasts. If and when Barwin might have a selected poems, I’m curious as to see which elements of his ongoing menagerie might be included.