Stephen Brockwell cut his writing teeth in the ’80s in Montreal, appearing on French and English CBC Radio and in the anthologies Cross/cut: Contemporary English Quebec Poetry and The Insecurity of Art (both Véhicule Press, 1982). George Woodcock described Brockwell’s first book, The Wire in Fences, as having an “extraordinary range of empathies and perceptions.” Harold Bloom wrote that Brockwell’s second book, Cometology, “held rare and authentic promise.” Fruitfly Geographic won the Archibald Lampman award for best book of poetry in Ottawa in 2005. The author of a growing stack of chapbooks as well as five trade poetry collections, his most recent publications include the chapbook Where Did You See It Last? (Textualis Press, 2016) and All of Us Reticent, Here, Together (Mansfield Press, 2016). Brockwell currently operates a small IT consulting company from the 7th floor of the Chateau Laurier and lives in a house perpetually under construction. 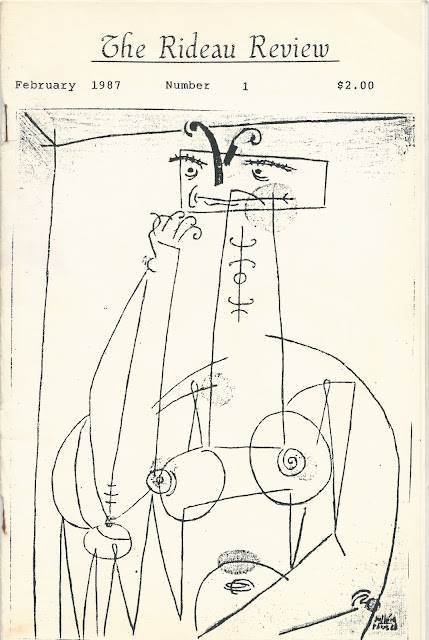 Q: How did The Rideau Review journal begin?

A: I’m not certain. Must have been 1985. I was at Carleton studying for my MSc in Math but I was sneaking in English courses on Spenser and other things. I met Frank Smith, an enormously generous person who still runs the NEADS—the national educational association for disabled students. I think they needed volunteers for something. Anyway, Frank and I were talking about words and writing. It turned out he loved fiction to bits. And wanted to write about it. And I was slumming at Gallery 101, attending Tree, working on some kind of book-like thing. I was one of the editors of Rubicon at McGill with Peter O’Brien. Ottawa seemed to need something in that vein—but smaller and lower budget. I don’t remember the final impulse to action.

Q: I’m curious about your work at Rubicon. How did you originally get involved with the journal and what was your role? How did your work with Rubicon influence the work you did through The Rideau Review?

A: I was associated editor. A fellow named Peter O’Brien was the editor—he wanted to create a kind of Canadian Paris Review with extensive interviews, superb fiction and poetry, and tight, serious book reviews. I really don’t remember how I heard about it or how we met. Must have been through the English department—maybe Robert Lecker, now that I think about it. I was associated editor—wrote some reviews, interviewed a couple of people, helped with choosing poems. That was a privilege: we were receiving amazing work from Daphne Marlatt, Eirin Moure, Chris Dewdney, Doug Barbour—reading that new work pried my eyeballs open and pulled back my ears, I can tell you that.

Q: What were your original ideas for The Rideau Review? Did you purely solicit work for the first issue, or did you send out a public call?

A: I feel like I’m in court. I know we received submissions at some point. I think we might have placed a few notices in things like Quarry. Other than that, I have no recollection.

Q: You mention you were hanging around Gallery 101 and attending Tree. What else was happening in Ottawa at the time, and how much of it (or the lack of it) prompted you to begin publishing The Rideau Review? I know, for example, Colin Morton was still producing items through Ouroboros [see the 2015 Ouroboros interview here], but Bywords and hole magazine hadn’t yet emerged. Arc magazine was roughly a decade old by that point. Was it the activity or the lack that prompted?

A: Your Honour, I regret that I have little recollection of events that took place 30 years ago. If it please the court, I would appreciate a recess to gather my thoughts and my literary dignity. Really, Frank and I simply wanted to gather together writing we enjoyed. It was no more sophisticated or ambitious than that. I have a better recollection of my final exam in probability theory. Maybe I need to say this: I think a significant amount of community literary production is performed in the moment for the joy of sharing the work and not for any legacy or history. It’s as beautiful and ephemeral as ice sculpture. I was still in my early twenties. What I knew about writing would have fit on the head of a pin—and that would be an analogy appropriate for the memory modules of the time. 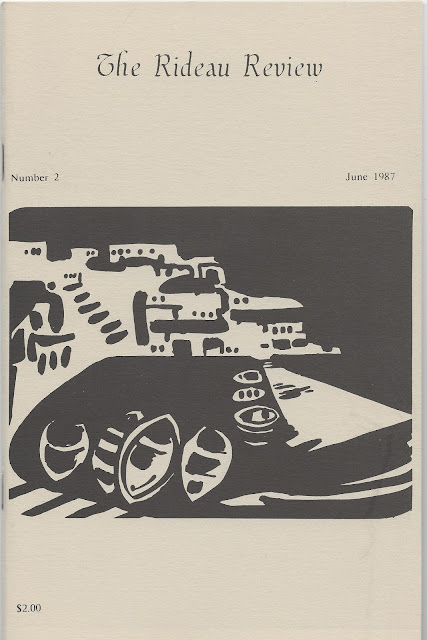 Q: Going through the issues, it becomes clear very quickly that you were engaged with an interesting array of Ottawa activity, from the First Draft performance group (Colin Morton, Susan McMaster, etcetera) and a whole slew of writers, from John Metcalf to Heather Ferguson and Ronnie R. Brown, and E. Russell Smith to Louis Fagan, Scott Moodie and Dennis Tourbin, as well as Montreal writer David McGimpsey (half of whom are still active in one form or another). How did the “Poetry and Performance” feature in the second issue come about?

A: As I recall, that poetry and performance event was “out there”—people screaming, crawling on the ground, a lot of costumes and grimaces. You knew Dennis well: he was not interested in half measures. These really were performance pieces: visual, aural, tactile: kinetic. I wasn’t aware of any slam or spoken word scene in Ottawa at that time. Louis and Scott were tough, surprisingly idealistic and uncompromising.

The First Draft work was more formal and, maybe, cerebral: it was scored with great care—it really was intended to be voice music. You could think of the Tourbin event as punk rock and the First Draft work as polyphonic intellectual jazz. I wish we could recreate that energy now.

We have good energy here in Ottawa, but few people have the nerve to scream something articulately—maybe that’s for the best. I don’t know. The only person we have in town who performs with that kind of energy and careful attention to every detail of sound and spectacle is jwcurry. The loss of Dennis was catastrophic. He was a spectacular writer, artist, impresario—nothing he did was half-made. A lot of creative energy lost its fuel.

Q: I agree, completely. Tourbin was a huge loss; I was able to interact with him during his final decade, and quickly became aware of how he uniquely bridged the gap between Ottawa’s literary and visual arts communities. As well, I’ve long had the sense that Louis Fagan and Scott Moodie were also quite the force in Ottawa in the 1980s; what is your recollection of either of them, and where did they, to your knowledge, disappear to?

A: I’m sad to say that, from what I understand, Louis Fagan died of an overdose after forming a rock band called the Born Again Pagans. Michael Dennis would know more. There’s a reference to him here that I found thanks to Pearl’s archaeology of Anthos issues: http://ruk.ca/content/louis-tape.

Q: What was behind the decision to suspend the journal? I know you put together a “final issue” that never saw print…

A: With almost near certainty a very bad relationship. But it’s a blur.

Q: With only three issues (and unreleased fourth), how well do you feel you accomplished what you’d set out to do with the journal? Each issue is packed with compelling creative and critical work, and really give a sense of a portrait of what was happening in and around Ottawa during the period. Where do you think the journal might have ended up, had it continued?

A: To clarify the previous answer, full time employment might have contributed to the hiatus. I dropped out altogether shortly after my first book which came out around the same time. I can’t speculate on what might have happened. It was an ephemeral thing. 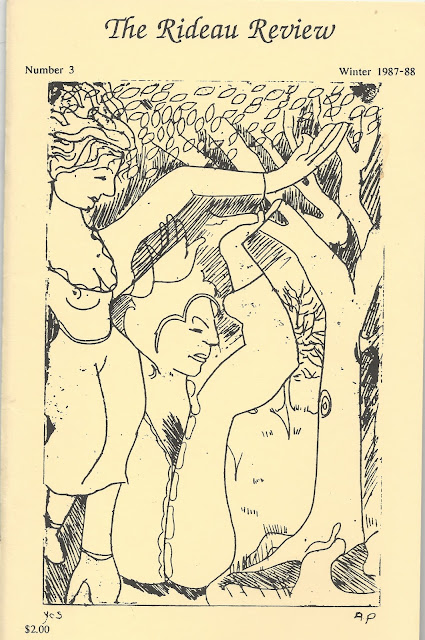