Bestiary is a first book of poems by an all Black girl who teaches us nothing is all black, or all female, or all male, or all belonging to humans, or all tidy. Bestiaries come out of an old tradition, but the beasts that push us to write our modern migration stories are found everywhere we dare deeply look. A hybrid of longing and lust is chronicled and mapped out here. What has been made contains a compass of new measuring. An inch is now a foot swinging at the father’s head.

The official public record tells us there are hundreds of years of unreliable others imagining and appropriating the desires of Black girls, eschewing their hopes and dreams as poets and people, their birth-marked stories, their personal migrations. For the other record, let me say, those reports have never had anything to do with Black girls and whales, Black girls and riots, Black girls and minotaurs, centaurs, satyrs, mermaids, werewolves, or Black girls “being a thing that breaks before it bends.” Black girls have always and often been the whispered-about and the strangely labeled. Not enough Black girls, whose own personal stories could turn you to stone with just a whisper, their up-the-side-of-the-mountain migrations rarely published or allowed to be told. But here is one that I have pulled from the great pile into the light so we might add it to the small truth pile of others. In Bestiary, no bending will be allowed. Rotate. (Nikky Finney, “Introduction”) 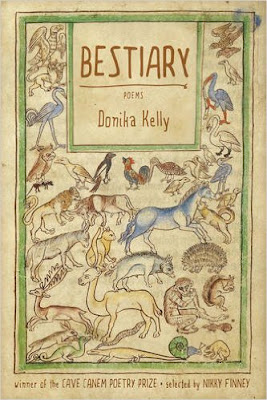 Northern California poet and scholar Donika Kelly’s first trade poetry collection is Bestiary (Minneapolis MN: Graywolf Press, 2016), winner of the Cave Canem Poetry Prize, as selected by Nikky Finney. The poems in Kelly’s Bestiary are incredibly precise, tight without feeling constrained, with a looseness that almost defies such a density and precision. As she writes in the opening of “Love Poem: Pegasus”: “Foaled, fully grown, from my mothers’ neck / her severed head, the silenced snakes. Call this // freedom.” A quick Google search provides that a “bestiary” is, precisely, “a descriptive or anecdotal treatise on various real or mythical kinds of animals, especially a medieval work with a moralizing tone.” Kelly’s Bestiary, on the other hand, uses her list of beasts (including a number of mythical creatures) to explore more human subjects, from the intimacy of the narrator to the larger scope of humanity, carving out short essay-poems on singing, love, grief, solitude, loneliness and travel. At times, it feels as though she utilizes the camouflage of the animal to discuss deeply human concerns, while other poems might provide the animalistic as distraction, counterpoint, or comparison. As she writes to open the poem “Love Poem: Chimera”: “I thought myself lion and serpent. Thought / myself body enough for two, for we. / Found comfort in never being lonely.” These are poems about being, living and witnessing the world from a human place so deeply felt, and deeply familiar, as she writes to close the poem “Arkansas Love Song”: “This is not about my mother. / Another failure. / It is about nothing else.”

Know, first, that she does not remain
behind the baleen forever.

Know, too, that the whale is unaware
of the woman drowning on its tongue.

And knowing this, recall the keening,
the slow build of sound in the body;

that we were afraid and pressed our fear
low in our breast, held it alongside our breath;

how finally there was no whale
or breath or sound or woman;

how, finally, there was only the body,
rising through the water toward the sun.