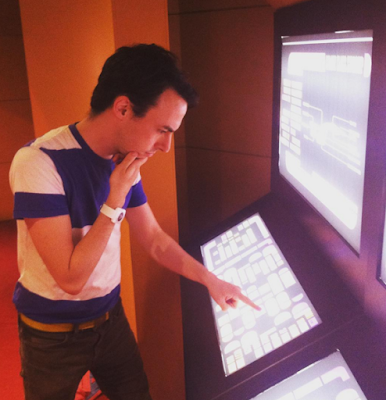 Ben Ladouceur is a writer living in Ottawa. His first collection of poems, Otter (Coach House Books), was selected as a best book of 2015 by the National Post, nominated for a 2016 Lambda Literary Award, and awarded the 2016 Gerald Lampert Memorial Award for best debut poetry collection in Canada. Ben is also the prose editor for Arc Poetry Magazine.

1 - How did your first book or chapbook change your life? How does your most recent work compare to your previous? How does it feel different?
My first chapbook, Three Knit Hats, which I wrote when I was 18, was such a lovely little totem of my extremely important passion. I gave copies to EVERYONE. My roommate's stepmom took twenty copies and gave them to her grade-eight students. A musician found a copy in a student lounge and turned a few of the poems into songs. Little cool things like that happened. It made me a very happy and proud and unembarrassed poet. I still think it's a pretty good collection, better than a lot of the chapbooks I wrote after it. (http://www3.carleton.ca/inwords/threeknithats.html)

Three Knit Hats is all jovial and emotive and overshare-y. Then I wrote more chapbooks, all trying new things -- going darker, or more descriptive, or more research-based, or more ecopoetic, or higher-concept. But it's funny to compare my most recent work to that first chapbook, because I really seem to have come full-circle. The most vulnerable, emotionally-specific poems I've published are probably (a) the first poems I wrote for TKH and (b) the last poems I wrote for my book Otter.

2 - How did you come to poetry first, as opposed to, say, fiction or non-fiction?
I've always written all three, just poetry the most.

3 - How long does it take to start any particular writing project? Does your writing initially come quickly, or is it a slow process? Do first drafts appear looking close to their final shape, or does your work come out of copious notes?
They come from copious notes, though less and less copious since I'm getting better at spotting false starts. Some come quick, some get revisited and refined for years.

4 - Where does a poem usually begin for you? Are you an author of short pieces that end up combining into a larger project, or are you working on a "book" from the very beginning?
The unit of composition is about the size of a chapbook for me. I've written about ten chapbooks and I sort of think of Otter as a three big fat chapbooks that go well together and intermingle a little.

6 - Do you have any theoretical concerns behind your writing? What kinds of questions are you trying to answer with your work? What do you even think the current questions are?
I try to tell the truth. By this, I mean that I try to relate the truth to people. But in equal measure, I also mean that I try to tell the truth apart from the things that aren't the truth. Probably all of my really good poems from the past few years come out of that effort.

7 – What do you see the current role of the writer being in larger culture? Does s/he even have one? What do you think the role of the writer should be?
I do think that poetry has the ability to instigate change in the world in a small way. Most poems don't but some do. Poetry is not a good way to transmit facts to people, for instance, but it is better-suited than most other media to transmit empathy. I really do think this. Really good poetry has helped me understand the lives and situations of other people -- refugees, old ladies, WWI soldiers, Mesopotamians -- in some sub-logical way I'd be hard-pressed to explain outside of the medium. Because they were never explained to me, these sensitivities, these things! They were sent in poems.

I don't think that it's always the intention of the poet to help people understand something. The poet just writes with whatever intention -- working out emotions, having fun with words, being heard, being found impressive. But if the poem is really good, there is a chance that it will change, if not the minds of its readers, then I don't know, their neural connections, their inner djinns, their bodily humors. There is a change, and it is for the better. Again, the poem has to be good.

8 - Do you find the process of working with an outside editor difficult or essential (or both)?
An editor is important, but so is a trusted friend or writer's circle member. I suppose these people are editors too.

9 - What is the best piece of advice you've heard (not necessarily given to you directly)?
Do not get hooked on anger. Let shit go.

10 - How easy has it been for you to move between genres (poetry to film/web scripts)? What do you see as the appeal?
Not very easy, the movement between. Poetry is always what feels most natural, I always come back to it. With the film project Other Men, I felt like a poet who happened to have written a film script.

11 - What kind of writing routine do you tend to keep, or do you even have one? How does a typical day (for you) begin?
My routine, or even the degree to which I have a routine, is always changing. Right now I use the Notes app on my phone a lot, I like it because it just looks like I'm texting. I also use Voice Memos, or I email myself. Then after a while I sit down and look through my phone and notebook and inbox and see what's good, and what's going on.

12 - When your writing gets stalled, where do you turn or return for (for lack of a better word) inspiration?
I spend time with animals. I watch dumb TV. I throw my brain away. It's like a street cat, it comes back.

13 - What fragrance reminds you of home?
Dogs.

14 - David W. McFadden once said that books come from books, but are there any other forms that influence your work, whether nature, music, science or visual art?
Yep yep yep. There is an artist I admire a lot. Last year I dreamt I bought her biography, so then I went and bought it, and I also got a book of her work. And for a good six-or-eight-month period, I'd look through the art book, and push my brain through the sieve of this artist's body of work, and then write poems, or edit poems, or try to. And I found that I was operating in a new way, with new criteria in mind. It made me feel better at describing the world.

15 - What other writers or writings are important for your work, or simply your life outside of your work?
Often, the important writers are the nearby ones, the ones I am able not only to read, but also talk to. If you're only reading big names, and that's the only scale of achievement you're exposing yourself to, you can get paralyzed. Reading local is a good way to hear stories you wouldn't otherwise here, and to study works of literature the mechanics of which you can get your head around.

16 - What would you like to do that you haven't yet done?
Iceland, Cuba, a boat across the sea.

17 - If you could pick any other occupation to attempt, what would it be? Or, alternately, what do you think you would have ended up doing had you not been a writer?
In elementary school I was a huge class clown, and I was like, I will be a comedian. But then in high school I got gloomy and "a big laugh" stopped being my endgame in conversations and creative works. I put whatever wit I had to new use, writing poems and stories that were sometimes trying to be funny, but sometimes trying to be serious, angry, important, absurd, sexy, depressing, or some such combo. I do secretly think that, if my genes were all different and I wasn't gay and I never had to come out, I might have pursued comedy instead of poetry, might never have had that formative fuck-the-world phase during which I adamantly rejected my status as class clown. I'm really intrigued that there are quite a few household-name lesbian comics but no immensely popular gay male comics. My working thesis is that a lot of the gay class clowns perhaps did what I did upon puberty, grew to mind the laughs, went dark, went a new way.

18 - What made you write, as opposed to doing something else?
It felt best.

20 - What are you currently working on?
Sonnets and stories.