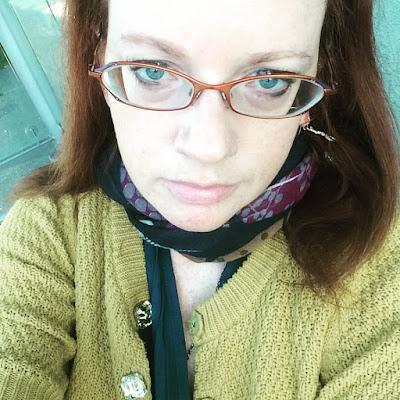 Jennifer Zilm is the author of Waiting Room (BookThug, 2016) which was shortlisted for the Robert Kroetsch Award for Innovative Poetry. She also wrote the chapbooks October Notebook (dancing girl press, 2015) and The whole and broken yellows (Frog Hollow Press, 2013). A second collection is forthcoming in 2018 from Guernica Editions. She lives in Vancouver where she works in libraries and social housing.

1 - How did your first book or chapbook change your life? How does your most recent work compare to your previous? How does it feel different?
My first chapbook was called The Whole and Broken Yellows and came out with Frog Hollow Press in late 2013. After it came out I did a flurry of readings; this felt like exposure therapy that really helped me with performance anxiety. So that really changed me. Waiting Room contains some of the same poems as that chapbook but the poems in common are arranged in such a way that I hope they can be understood in a different context. Knowing the book was going to come out, I didn't read any of the poems in the book from summer 2014 to the book's release this spring. I was afraid I would burn out on the poems. What has happened as I've begun to read them again is I have begun to see the different ways the book can be presented and accessed, this has allowed me to understand the poetry better. The book itself also had a strange ripple through my personal life.

2 - How did you come to poetry first, as opposed to, say, fiction or non-fiction?
I started writing poetry when I was, yes it's true, a teenage girl. Right around the same time I started to play truth or dare. Lately, I have been thinking that these two things are related though I'm not sure exactly how other than that the truth is the dare and poetry to me seems the best means of expressing that.

3 - How long does it take to start any particular writing project? Does your writing initially come quickly, or is it a slow process? Do first drafts appear looking close to their final shape, or does your work come out of copious notes?
All of the above. I sometimes think poems come fully made but then I will look back at old notebooks and think "have I actually been writing this poem for years?" I had an experience where I wrote a sestina at the beginning of 2014 and it felt as though it was just channeled and I felt like a mystic poet. But then I went back and realized I'd actually been writing towards the poem for a really long time.

In terms of note taking, I have a couple of notebooks on the go at a time. I have one that is a general notebook and which is a "commonplace"-- quotes from books etc.

4 - Where does a poem usually begin for you? Are you an author of short pieces that end up combining into a larger project, or are you working on a "book" from the very beginning?
I usually work on two projects. Waiting Room was definitely a project, and a book from the very beginning but it began with one poem (Spiritual Media) and then all of the project started to unfurl from that point and I began to sort of see how each poem I was writing would relate to the manuscript. However, at the same time I was working on other poems that seemed more "stand alone" and which I then sort of wove into a more disparate collection that I worked on over the summer of 2013 and then into 2014. That collection—which is tentatively called Ephemera and which is coming out with Guernica Editions in 2018—has poems written both before and after Waiting Room and organizing it was far more challenging. A lot more poems were cut and I changed the ordering a great deal. Eventually I made a map where I tried to see the direction the poems were making. I paid attention to nouns and keywords so I could articulate what the manuscript was "about".  Then I had a very intuitive friend read over it and she sort of redrew the map for me.

5 - Are public readings part of or counter to your creative process? Are you the sort of writer who enjoys doing readings?
They have become a part. Much of Waiting Room was written at the time when I began to do public readings. It made me pay closer attention to sonics and to line breaks. In my first public reading I remember having this moment where I felt "oh this is another way of getting to know this poem". The idea that I would be reading a poem in front of people seems so terrifying that the only way I can really do it is by pretending that the world is ending. So since I've started doing it I feel as though I am living in a state of realized eschatology. Which is fun.

6 - Do you have any theoretical concerns behind your writing? What kinds of questions are you trying to answer with your work? What do you even think the current questions are?
I want to say something grandiose like "how should a person be?" but I can't think of anything or how can words take down late capitalism, but I can’t think of anything.

8 - Do you find the process of working with an outside editor difficult or essential (or both)?
I find it very helpful. Even the idea of having a reader in my head as I write helps me.

9 - What is the best piece of advice you've heard (not necessarily given to you directly)?
My mentor Jen Currin, when I was beginning to write Waiting Room, told me I needed to "get messy."

I heard the poet Lissa Wolsak speak on a panel once and she said "I honor the process, even if it seems daft." That is a mantra.

Some other gems that have resonated: "It's not a good idea to apologize for things you're not really sorry for" (this is in Waiting Room). "Think of each line as a poem in itself."

10 - How easy has it been for you to move between genres (poetry to critical/academic prose)? What do you see as the appeal?
I worked for a long time on a dissertation about gender, angels and prayer in Second Temple Judaism. I found that the psychic space required for that type of work left little room for poetry. Often I found it hard to give the elevator speech about "what are your research interests" (asked by senior academics) or "what is your thesis about" (asked by people outside the discipline). I found that after I had decided not to finish the dissertation, I actually had about 100 pages of material I could work with. Two erasures in Waiting Room ("Dead Sea Scrolls" "Post-doctoral, fellowship: the Wedding Ceremony") were actually built from the dissertation and seem as though they are the answers to those two questions. So, I like to believe I am writing poetry even when I am not actually writing it, but anytime I am writing anything down.

11 - What kind of writing routine do you tend to keep, or do you even have one? How does a typical day (for you) begin?
I try to read/write first thing in the morning. If I have time at home, I will do it there. If not I will do it in transit. I am a great fan of writing in contained, trapped spaces. So the bus is really one of my favourite places to write.

12 - When your writing gets stalled, where do you turn or return for (for lack of a better word) inspiration?
See above! I tend to get on a bus with a book and a notebook and some music.

13 - What fragrance reminds you of home?
Burning leaves.
14 - David W. McFadden once said that books come from books, but are there any other forms that influence your work, whether nature, music, science or visual art?
All of them. There are ekphrastic poems in my book about visual art and the cut and paste collage (art therapy style) really helps me with my writing process. And of course, probably would never have wanted to write poetry if I hadn’t heard Bob Dylan’s Greatest Hits Volume 2 when I was five years old being driven from Greater Vancouver to Northern B.C. and heard Dylan says “10,000 miles in mouth of graveyard.” So music is important. I am also inspired by documentaries (especially ones that have a collage like atmosphere) and the news. I watched the CNN Series “Crimes of the Century” and I felt like it was speaking to me.

15 - What other writers or writings are important for your work, or simply your life outside of your work?
Where to begin? Much that has been written or translated by Anne Carson: Nox (which I used a lot in my chapbook October Notebook) and the Euripides translations Grief Lessons; My Life by Lyn Hejinian; the original V.C. Andrews titles (Flowers in the Attic etc.) but only the editions which have the peep hole covers; bpNichol's Selected Organs; Maggie Nelson's Bluets; Proust’s In Search of Lost Time; parts of the Gospels (the healing of the blind man in Mark and John is referred to several times in Waiting Room; the Dead Sea Scrolls Thanksgiving Hymns; the Book of Genesis; Northrop Frye's The Bible and Literature; Jack Gilbert; Irving Layton (I read him when I was 14 and his syntax still stays with me); Jen Currin.
16 - What would you like to do that you haven't yet done?
Learn Arabic.

17 - If you could pick any other occupation to attempt, what would it be? Or, alternately, what do you think you would have ended up doing had you not been a writer?
In my next life I'd like to be a gospel singer or an outlaw country singer/song writer.

18 - What made you write, as opposed to doing something else?
I'm uncertain. I suspect you hear things when you're very young and just fasten on to them. Someone said "Jennifer is very verbal" when I was a baby and it probably just stuck. Reading is one of the first skills one learns so if you’re good at it maybe it’s good to stick with it.
19 - What was the last great book you read? What was the last great film?
I read Maggie Nelson's Bluets at the exact moment when I needed to read it. The last great film was Adam Curtis’ Century of the Self.

20 - What are you currently working on?
A manuscript that is sort of In Search of Lost Time but set in the housing projects of Surrey, B.C. (mixed poetry/prose), a book of poems called Charismatic Megafauna, Research Questions and Crimes of the Century. I’m also thinking about a project that is going to be poems based on the spoken introduction to various classic country songs on my iPod. I'm calling it Country and the first section will just be Johnny Cash's various intros to I Still Miss Someone.