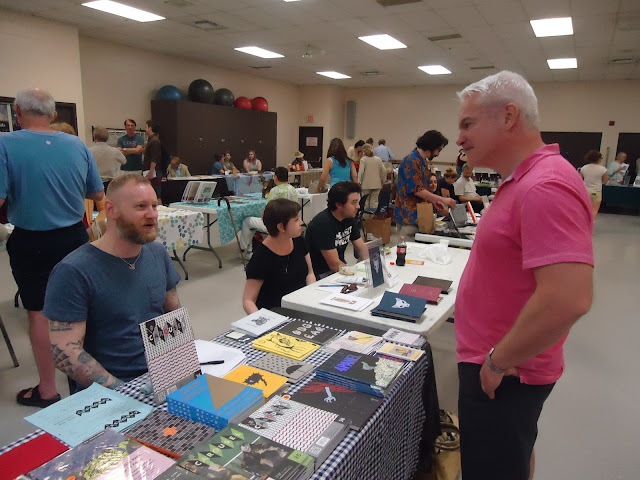 [Stephen Brockwell, right, speaking to a seated Jim Johnstone] Okay: given our wee girls, it has taken more than a couple of weeks to start getting into the small mound of publications I ended up with, after our most recent small press fair in mid-June.

Ottawa ON: Only a few blocks away from where we live in Ottawa’s Alta Vista neighbourhood, poet and critic D.S. Stymeist (who has a first poetry collection forthcoming, by the by) runs Textualis Press, a small chapbook press only a couple of titles in. His newest title is by Ottawa poet Stephen Brockwell, the chapbook Where Did You See It Last? (June, 2016), a lovely title “Printed on Classic Laid (Avon Brilliant White),” with cover stock “Glama Natural (Pearl) and Royal Sundance Fiber (Ice Blue).” Even if you don’t know much about paper, you might just get a slight sense of how damned classy this small item looks. I’ve always been fascinated by the way, through some half-a-dozen trade poetry collections going back to the late 1980s, that Brockwell has composed poems as small ‘moments,’ composing small capsules utilizing voice and/or character studies. The poem “Biography of the Letterpress Father,” while I know I can’t automatically read as biographical, becomes curious knowing that his own father was actually the printer of Brockwell’s debut, The Wire in Fences (Toronto ON: Balmuir Press, 1988), a poetry collection that included a number of short, lyric ‘studies’ surrounding his mother’s home territory of Glengarry County, Ontario.

Biography of the Letterpress Father

The day after my father died, I swept
a thousand pounds of scrap—plates, rods, wires,
gears—with an industrial broom three feet wide.
I hurled reams of 90lb cover stock, rolls

of blank newsprint, corrugated cardboard,
pallets of die-cut printed boxboard packed
but never delivered to a customer who never paid.
I dumped his confession from drawers of lead type

on the concrete floor of the loading dock
and shoveled it into the bin below.
I poured endless canisters of wasted ink,

blending indigo, emerald, pink, gold and black
into this grey biography of his adulterous heart. 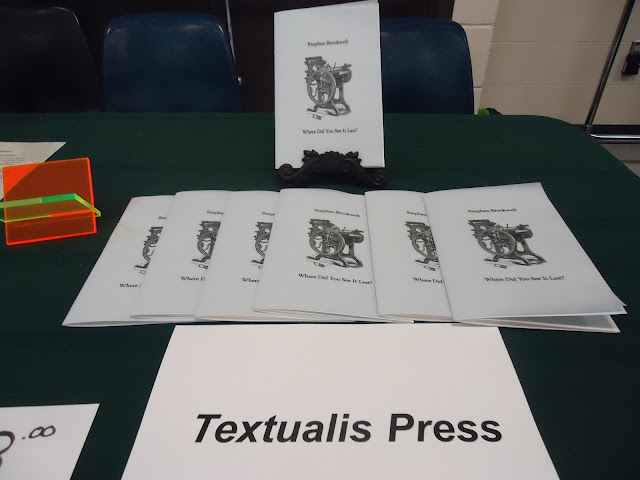 There is something about the production of this small item that really clicks with the meditative weight of Brockwell’s pieces in this short collection, eight poems moving through a variety of “biographies,” from “Biography of the Discovered Owl” to “Biography of the Barbed Wire Scar” and “Biography of the Praying Mantis,” as well as the enticingly-titled “Bacon Production on an Industrial Scale.” And for those who don’t already know, Brockwell also has a new poetry title out this fall—All of Us Reticent, Here, Together—with Mansfield Press. 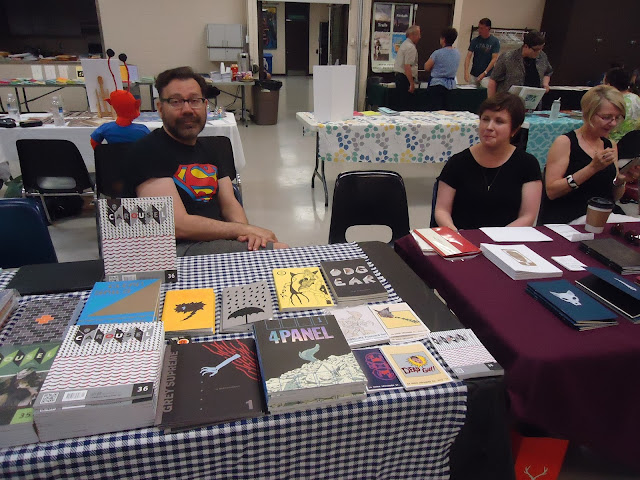 Toronto ON: From Toronto’s Desert Pets Press comes FOREIGN EXPERTS BUILDING (2016) by Michelle Brown, a poet who is, incidentally, also the author of a forthcoming debut poetry collection: in 2018, with Palimpsest Press. There are some intriguing moments in Brown’s short lyrics, such as the cadence of the poems “SUN RISES IN A CHINESE HOSPITAL” and “LEDGE.” There are moments in some of these pieces that require a bit more tightening, and other moments that do feel a bit too ‘clever’ for their own good, such as the opening to the poem “APARTMENT,” that reads: “The couple next door had a baby, and each night / we woke to his baby ennui.” As a whole unit, this small chapbook might not be perfect, but there is enough positive and intriguing in this debut that Michelle Brown now has my attention.

Here’s something funny. A clamshell that you couldn’t
open. In a market, and it was definitely funny.
The others thought so. They were all wiping their
Eyes with dirty napkins as they watched you dig your nails in.
In the market, as the night was closing up. The people were laughing
and you were angry because you wanted it so bad, wanted
it all, the hearts and brain of it all together, and I was laughing
because it was funny, so funny, and that’s what humour is,
it’s funny because you’re afraid it’s true, and here I was laughing
at your stubby fingers, laughing at the woman scrubbing the shells
in a bucket of seawater, laughing at the sea, that impossibility,
and knew that nothing would ever be funny again
as we stood up from the table and returned to the rain,
all of us laughing at you and the timing that death
seems to have, lapping at everything.