Produced in a beautiful hardcover edition of two hundred and fifty copies is poet and editor Phil Hall’s My Banjo & Tiny Drawings (Toronto ON: Flat Singles Press, 2015). Flat Singles Press, resurrected after an extended dormancy by incoming editor/publisher Joseph LaBine, is a press originally founded and run by Hall himself; producing small broadsheets and chapbooks very occasionally, many of the items were by Hall, but also included publications by Bronwen Wallace and others in Hall’s extended network of writers. Having produced a small handful of limited-edition chapbooks and other ephemera, continuing what Hall began, this is LaBine’s first foray into a full-sized title and the results are stunning. This is actually the second title of Hall’s to release lately, after the ‘selected poem’ Guthrie Clothing (WLU Press, 2015) that I helped see through their Laurier Poetry Series. 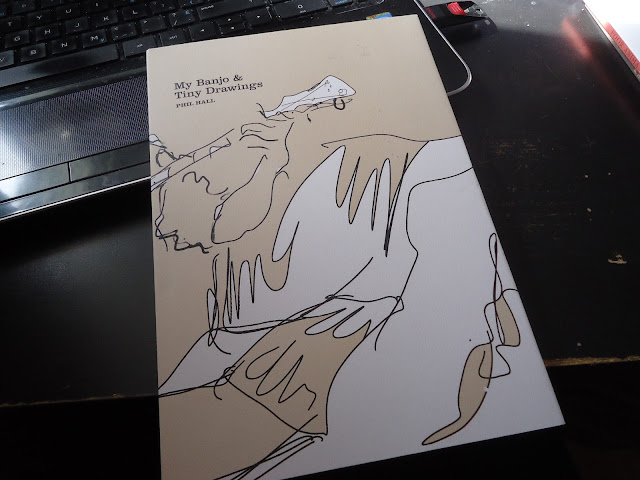 The short collection is constructed in two sections—“My Banjo” and “Tiny Drawings”—the second of which is made up of extremely condensed poems:

both my holes
want the staple back

The poems collected within further Hall’s exploration of language, sound and meaning, as he picks at the minutae, working to see where the logic of such small explorations might lead. As the second section of the two-part poem, “My Banjo,” reads:

says a sticker     on his banjo-case

Given the liveliness of Hall’s sketches, rendered as specific and quick as the finest shorthand, I’m a bit disappointed to see that the book doesn’t actually include any. Even the cover image, a sketch, one might presume, of Hall himself on banjo, is by Stuart Kinmond, and not by Hall. Still, the idea of the quickly-rendered sketch is an intriguing one, set up, one could presume, as another one of Hall’s killdeer-esque distractions; it suggests a compositional process that is far different than Hall’s patiently and delicately carved fragments, each carved and carefully set to accumulate into something far broader in scope. “When the tap turns at full,” he writes, in “Eigner,” “why does Narrative have to stand / on the garden-hose in its skates // wearing a giant dollar-bill costume [.]”

Copies are selling for $22; requests by email to flatsinglespress@gmail.com