And nothing else
to contrast these variations of white

and thicket
choked by thicket

in thin piles that dim the perimeter.

Every other noun
freezes over.

On the heels of his California trilogy comes American poet Joseph Massey’s fourth poetry title, Illocality (Seattle WA/New York NY: Wave Books, 2015). His previous collection, To Keep Time (Richmond CA: Omnidawn, 2014) [see my review of such here], was the “third and final book grounded in the landscape and weather of coastal Humboldt County, California, and contains the last poems I wrote there before moving to the Pioneer Valley of Massachusetts in the winter of 2013.” As the press release for this new title informs: “Joseph Massey composed Illocality in his first year in Western Massachusetts. Massey’s austere landscapes channel the quiet shock, euphoria, and introspection that come with reorientation to place.” Illocality is a sequence of exploratory moments composed in short bursts, as Massey attempts to locate himself in the physical and philosophical spaces that make up his new geography, although one that seems devoid of human interaction.

The world is real
in its absence of a world. (“TAKE PLACE”) 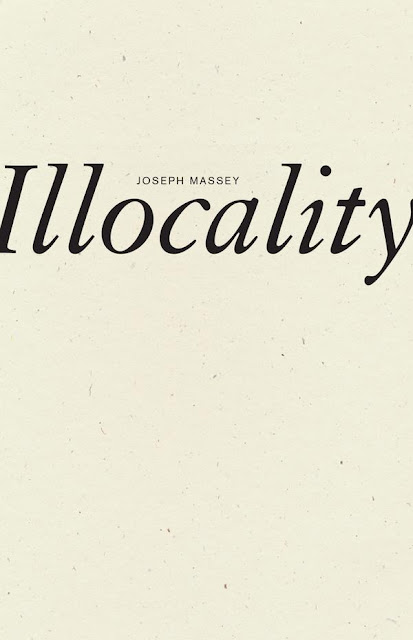 His short, precise lines echo William Carlos Williams and Robert Creeley, but place themselves in entirely different ways: the physical shapes of his immediate physical environment. And Pioneer Valley (especially during the winter) is very different than Humboldt County, California. As he writes in the poem “PARSE”: “This rift valley // A volley of / seasonal beacons // Window / where mind // finds orbit [.]” Where Williams and Creeley included the domestic and other other human interactions in their precise explorations (that included geography and the physical landscape), Massey’s poems allow for the suggestion of human presence without any kind of direct interaction. Where are all the people in Pioneer Valley?

First day of summer—I’ve got my omen—

the clouds are hollow, roving
above a parking lot.

So much metal
shoving sun

the sun shoves back.

Massey’s invocations of the natural world are often in parallel, or even in conflict, with the human world: “the sun shoves back.” His is an uneasy balance between the two. Logics of the natural and human elements of the geography collide, and become illogical, creating their own set of standards, logics and rules, all of which he attempts to track, question and even disentangle. As he writes in the extended sequence “TAKE PLACE”:

As if a field guide
could prevent
the present

from disintegrating
around us.