A graduate of Seymour Mayne’s and the University of Ottawa’s Creative Writing Program, b stephen harding has published poetry in Bywords, Chasing Sundogs, Hook & Ladder, Ottawa Poets ‘95, Volume 1 (audiocassette), Paperplates, and Remembered Earth, Volume 1 (Bywords), and is the author of the chapbook surcharges sometimes apply (Ottawa ON: Friday Circle, 1996). A former co-director of The TREE Reading Series, he was the founder, co-editor and managing editor of the monthly poetry broadside graffito: the poetry poster, a free poetry journal that existed in poster format, distributed monthly via bulletin boards across Ottawa (and worldwide, via Canada Post), as well as through electronic graffito, most of which is archived at the National Archives of Canada. Guest-editors for the series included Stephanie Bolster, Robin Hannah, rob mclennan, David Collins and Tamara Fairchild, with Robert Craig and Christal Steck serving as part of an informal editorial board, and Seymour Mayne serving as editorial advisor. 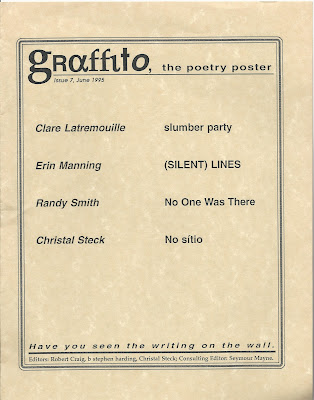 Q: How did graffito first start? I know there were at least a couple of you that had emerged from a creative writing workshop with Seymour Mayne at the University of Ottawa. What was it that prompted the creation of a monthly poetry publication?

A: graffito is your fault. Maria Scala and I were walking down Dalhousie St. and we saw one of your poetry posters. We both agreed that we could do something better. Not sure what happened next, but I’m guessing that we went to Seymour Mayne at some point and suggested graffito to him. Seymour was our Prof. of Creative Writing at the time. He liked the idea and got us the necessary resources i.e. access to free paper, and a place to do free photocopying at the University. It became a group project with Maria Scala, Robert Craig and Crystal Steck as joint editors.

Q: Were all four of you from the creative writing workshop? Was each issue edited as a group? How did you decide on the format of four or five poems per monthly issue, and how were they distributed?

A: All four of us where product of the Creative Writing program having taken both the beginner and advanced classes in poetry. In the beginning we edited the poster as a group. This would change over time. The size: well, I remember I wanted something bigger than 8x10 inches as I wanted it to have more than one poem, and wanting the visibility of a larger format to catch attention. Using tabloid size paper also folded well into 8x10 for mailing proposes. I’m not sure how we decided on 4 or 5 poems per issue, but we wanted to give as much exposure to poets as the size would allow. Distribution for all the run of graffito was me and my feet or via mail. I walked around the university into the market and up Bank St. as far as Billings Bridge Mall stapling posters on poles and in any shop, store or bar that would let me. 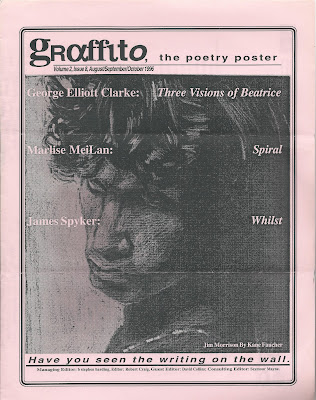 Q: What else was happening in Ottawa during the time you were producing graffito? What kind of reception did the journal have, whether in Ottawa or beyond?

A: I’m foggy on what was happening back then. There was a number of poetry readings including one I regularly attend at the Royal Oak on Laurier, TREE Reading Series, Dusty Owl; Bywords was being published as well. There was a lot more than this; the art scene was hopping back then. Robert Craig was hosting salon poetry readings in his apartment. I remember great poetry there and awesome Turkish coffees.

My general impression of the time was that Ottawa was the place to be if you were writing or an artist. As to what kind of reception graffito got, I’m not sure. I remember a couple of good reviews of it, but I think the kinds of poets that submitted to it say it was well received. graffito was very limited in the beginning with only 50 copies to start and at its peak was 350 copies. It did get some international distribution over time. This was done by trading with other poets/writes or mags.

Bywords was the poetry mag/events calendar and it was a definite influence on what graffito would be and become.

Q: At what point did you decide to turn graffito over to guest-editors and why?

A: That was more or less the result of editor fatigue. Also, the editors where moving on to other things at the time. Guest editors made sense to me as it was a way of including local poets. Getting other poetic views for the poster seemed a way to also keep the poster fresh and moving forward. For me it allowed more time for layout design and distribution, and networking with fellow poets, writers and editors.

Q: How involved were the guest-editors in soliciting work? What was the process of inviting and receiving submissions?

A: The guest editors had a free hand when it came to soliciting work. graffito got most of its submission based on word of mouth. It was also reviewed in a number of publications with helped get the word out.

Q: After four years of publishing, what do you feel graffito best accomplished? What were your frustrations? 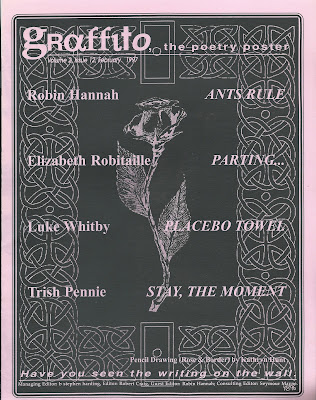 A: My aim with graffito was to produce a vehicle that would give poetry a wider and diverse audience. I think we achieved that. The reality of a poster placed in public places is there is not a lot of feedback.

There were only a few frustrations... meeting deadlines, having enough quality poetry submissions to choose from, and all the walking required to get the poster out to its target audience. Oh, and then there was the funding, especially in the last 2 years.

Q: What happened to the funding? Is that the reason the publication finally wound down?

A: It wasn’t so much the funding as it was me winding down on the project. I was finding it harder and harder to meet my own deadline. I’d like to say it was more complicated than this, but in truth it wasn’t. From the point of view of the project it was fine, it had a constant stream of good to great submissions. There were some issues with attempting work by locals, and good poets to act as guest editor, but even that was not big enough to keep the project moving. In the end my shoulder was not strong enough to carry the project forward.

Q: What effect, if any, had graffito on the way you saw your own writing?

A: I would say that graffito had no effect on my writing. Well, that is not completely true. I would say it helped refine what I wanted my poetry to become.