We might think of description as the suppression of distance, since it brings that which is not present near.
Language, meanwhile, counterfeits presence. (One thinks of Gide’s Les faux-monnayeurs.)
Thus: it matters which language you use, whether it is “washed,” how prepared. The extent and location of your vocabulary. The eye remains fixed within the face and yet certain entities entice it, the anticipation of skin, something sinks in cloudy liquid. Temperature is so important in description, or that one object may hide another, at least in part.
It is possible we mortals feel solidarity with literary “objects,” in that these carry in themselves their own negation. Nothing participates in literature in permanence. (“On Description”) 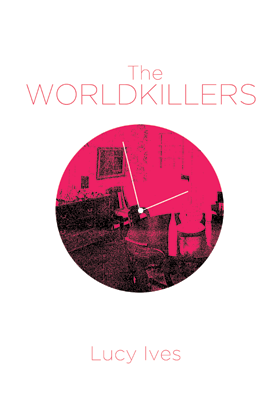 In her third trade collection, The Worldkillers (Ann Arbor MI: SplitLevel Texts, 2014), New York City poet Lucy Ivespresents a work in three sections—poem, novel and essays—each of which bleed structurally across the boundaries of form. Ives, the author of Orange Roses (Ahsahta, 2013) [see my review of such here] and nineties (Tea Party Republications, 2013), is quickly developing into a poet of sentences on par with the poem-essays of Lisa Roberston and Phil Hall for their sharp blend of lyric, thought and wit. Her collection is structured in three parts: a section of poems, “My Thousand Novel”; a novel written over the course of a day, “The Worldkilllers”; and an essay, “On Description.” Still, the form between each of these sections remains rather fluid. It remains unclear if the declarations of form (the second section is declared a novel, as the third is declared “[an essay]”) are included as red herrings, distractions or as each section’s suggested focus. As the combined press release for The Worldkillers and Maged Zahir’s If Reality Doesn’t Work Out reads:

Why “Texts”: why “SplitLevel Texts,” that is, not that we are not interested in genre, but we are not interested in saying strictly, this one, this one we love MOST (id est, poetry) cannot contain others: are we children of the theory wars: yes and we were born on the side that loved capacity and textuality even in the earth: and what about hybridity: yes, but more important more to our essence: do we look to darwin and raise a glass to hybrid vigor: yes, very much more than probably yes : so why “Level”: do we see things as balanced: of course and also of course not: oh, so is that what the “Split” is about then: do we see the balance out of balance: yes: so what about “SplitLevel”: have we ever lived in one: have you?

The poems in the first section (including the poem “Poem”) are constructed as a sequence of accumulations; lines and phrases compiled in a kind of breathless rush, much in the way of some of the pieces from Orange Roses. The first section of “Poem” opens:

Ives appears to favour repetition and the accumulation throughout her work, and the subsequent sections share this sense of accumulation. Where the poems in the first section might be accumulations of lines and phrases, the second section is one of prose-sections, sentences and plot-movements, and the third one of phrases, quotes and logical turns. The eighth section of her essay, “On Description,” titled “Speculation:” reads:

In the foreground there are reeds—long blades that shake; closed blossoms; and now a shelf of cloud, under which pale orange.
I write in a notebook, “I was just whistling.”

As much as anything else, The Worldkillers is a work that explores the boundaries and blurrings between the arbitrary lines drawn around particular forms, just as much as she plays with the naming of those same forms. Is the poem “Poem” a poem and nothing more? Is the essay “On Description” truly an essay and not, say, a poem-essay, or even simply a poem?