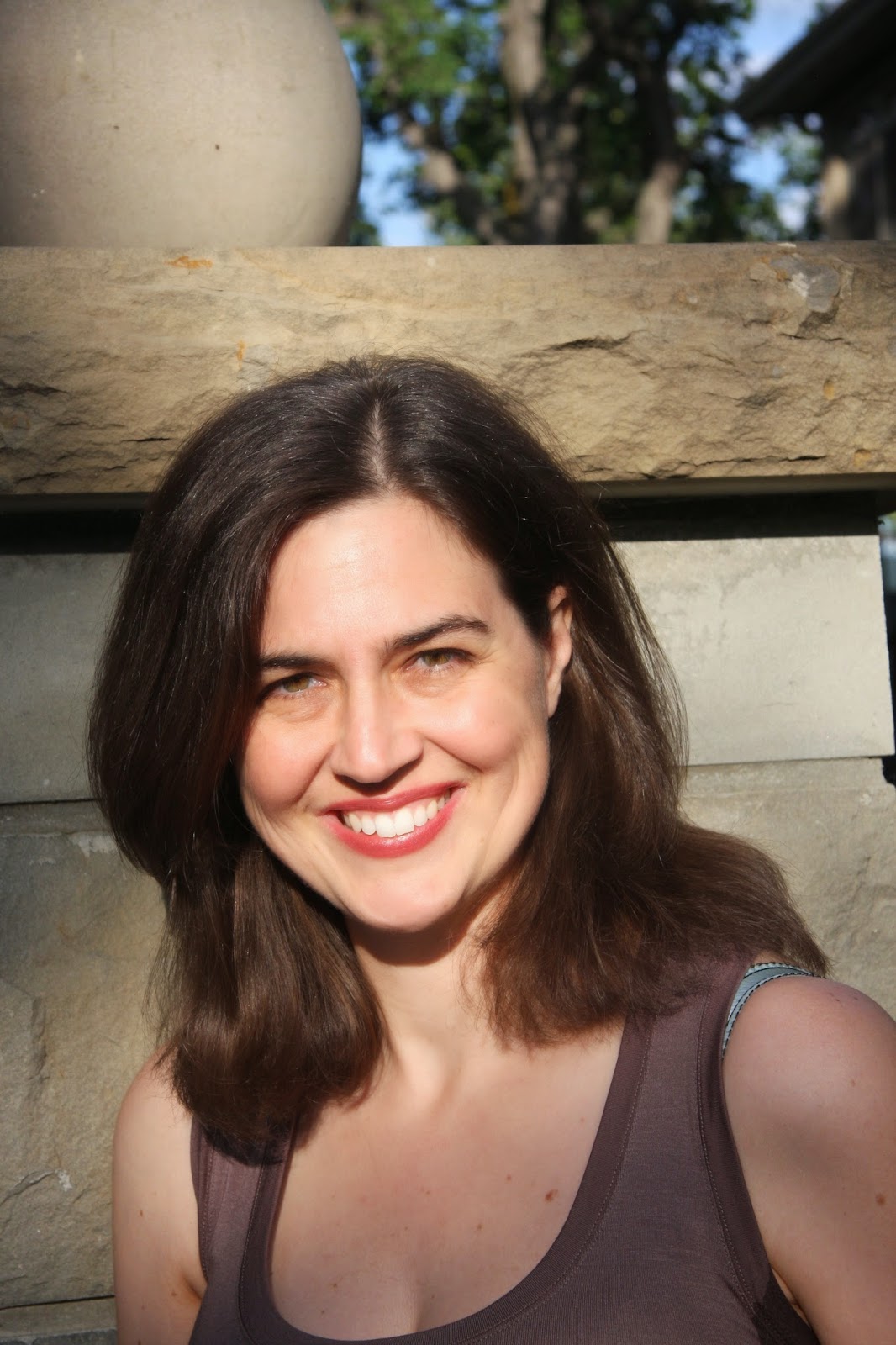 Nikki Sheppy is a poet, editor and arts journalist. She has a doctorate in English literature from the University of Calgary. Her book reviews have appeared in Uppercase Magazine, Alberta Views, and Lemon Hound, and her poetry in Event. She serves as President of the Board of filling Station, Calgary’s experimental literary and arts magazine. Grrrrlhood is her first collection of poetry.

1 - How did your first book or chapbook change your life? How does your most recent work compare to your previous? How does it feel different?
The biggest change is exposure: basically, meeting new people or meeting people anew, as a poet. I’ve met other writers, readers, publishers, advocates and critics, with whom I’ve had many delightful conversations. The chapbook itself was an opportunity to play. When I wrote it, my goal was to have fun and try a few things I hadn’t done before. So “translating” the math-like poems, for instance, was born of my wish to experiment with an irreverent, figural engagement with science, converting the rules of math into the puns, slippages and gamesmanship of language.

2 - How did you come to poetry first, as opposed to, say, fiction or non-fiction?
When it comes to writing, it was always poetry for me. My mother teaches Québécois poetry, so as a child I would write poems I think as a way of speaking her language. I once wrote a terrible rhyming piece as a kind of spell to do away with her debilitating migraines. At puberty, I also wrote a cheeky jingle for tampons. As I got older and began reading people like Nicole Brossard and Erin Mouré, I realized that I related to language more than I did to narrative.

3 - How long does it take to start any particular writing project? Does your writing initially come quickly, or is it a slow process? Do first drafts appear looking close to their final shape, or does your work come out of copious notes?
Some days I spend twelve hours and nothing happens. The next day, something complete emerges in twenty minutes. There’s no particular dividend for time invested. My work is a process of throwing out 85 per cent of what I do, tout entier. I write it, revise it, throw it out. Except for what stands out. What makes it to print or performance is a question of timing or survival.

4 - Where does a poem usually begin for you? Are you an author of short pieces that end up combining into a larger project, or are you working on a “book” from the very beginning?
I typically fail when I try to exert too much control. Therefore I often invite a lot of divergence, fragmentation, swerving away from what I thought I was ‘doing’ in the poem. As a process, this can feel incoherent, though it’s meant to reflect a way of being that is responsive and open to its own dismantling. I tend to work on sequences or books—several of them at once, shifting focus as a particular project gains momentum.

5 - Are public readings part of or counter to your creative process? Are you the sort of writer who enjoys doing readings?
Given how terrified of performance I was as a child, I’m surprised by how comfortable I am reading. Perhaps it’s my age. I feel that reading is ephemeral, occasional and social—it’s part of an event or community more than it is any profound statement about myself. It’s merely a contribution to a particular historical expression of literature, after which we go for drinks. I appreciate that it gives me an opportunity to hear, and to let others hear, the work aurally.

6 - Do you have any theoretical concerns behind your writing? What kinds of questions are you trying to answer with your work? What do you even think the current questions are?
I’m less inherently interested in “current” questions than some writers. I tend to focus on the concerns that I—as a particular kind of writer—am well-adapted to address. Broadly, I would say that my concern is power. My projects are often both critical and utopian, starting with the representation of a problem and then envisioning an alternative, even (perhaps preferably) an impossible one. Sometimes the solution is merely a particular kind of enunciation. Power is not always a question of identity politics. Sometimes it’s situational, discursive, historical, ecological, even romantic. I find it amazing—given gender and sexual politics and the inherently power-laden dynamic of eroticism—that people succeed in having romantic relationships, for example. Often my work is about trying to recover power where a particular situation is unfavourable to it. Perhaps it’s a mark of cynicism that my “solutions” are so often imaginary or strictly formal, rather than real or practicable.

7 – What do you see the current role of the writer being in larger culture? Does s/he even have one? What do you think the role of the writer should be?
Ouch! This is a massive question. Yes, the writer has a role. To surprise, thwart, resist, play, dismantle, entertain, fuck up publicly, intervene, cry havoc, run around disturbing people with their nakedness, tactically deploy artifice, denounce the denouncers who are just consolidating power—and, well, write words, sounds, glyphs and graphics.

9 - What is the best piece of advice you’ve heard (not necessarily given to you directly)?
Whenever you wish you could achieve things in writing that you see others doing so beautifully, take a moment to locate whatever is strange and exceptional in your practice. That is your contribution, even if it’s not to everyone’s taste—even if sometimes, it’s not to your own.

10 - How easy has it been for you to move between genres (poetry to journalistic prose)? What do you see as the appeal?
I find it easy and necessary. It’s a reboot for writing ruts. I like being able to switch modes so that I consider different grammatical structures, lexical registers, and types of discourse. They lend themselves to each other with interesting results, I think. I also enjoy reviewing books or commenting on culture in journalism, as an opportunity to reflect on both my reading and creative writing.

11 - What kind of writing routine do you tend to keep, or do you even have one? How does a typical day (for you) begin?
I write in coffee shops. My favourite serves excellent green tea. I set up with books, laptop, ear buds, and time (and sometimes my friend Naomi). They are very tolerant of me, as long as I occasionally purchase more tea, so I find that I can work for hours at a stretch. This suits me because I need social buzz around me (insulating myself with music) in order to focus internally. If it’s too quiet, I focus on my environment.

12 - When your writing gets stalled, where do you turn or return for (for lack of a better word) inspiration?
I read. Poetry, belletrism, speculative architecture, and even sometimes theory. Anything that is more about form, argument or linguistic presentation than narrative.

13 - What fragrance reminds you of home?
Lilacs. I didn’t know it until I lived in London during my MA. Then one day I was down near the Wetland Centre in Barnes and I passed beneath a lilac tree. I was immediately, acutely, homesick. In Calgary, there’s a Lilac Festival every spring around my birthday.

14 - David W. McFadden once said that books come from books, but are there any other forms that influence your work, whether nature, music, science or visual art?
I’m very responsive to visual and spatial practices, including film, architecture, and maps. Of the sciences, I prefer math and natural science. I find them fascinating, but as a dabbler, I fear getting things somehow ‘wrong’ in my work, which is likely why I use these fields as ways to mess with other things, rather than as ends in themselves. I take pleasure in the scientific precision of work by other poets, like Adam Dickinson’s Kingdom, Phylum and Polymers, for instance, and Susan B.A. Somers-Willett’s Quiver—though they too use science to mess with things.

15 - What other writers or writings are important for your work, or simply your life outside of your work?
So many! I wrote a doctoral thesis on poet Sylvia Plath and experimental modernist Anna Kavan, with considerable attention also to Paul Celan and Bessie Head. I am wowed by the likes of Lisa Robertson, Dennis Lee, Nathalie Stephens, Vicente Huidobro, M. Nourbese Phillip, Tim Lilburn, David Dowker, Christine Stewart, Erin Mouré, and so many talented friends and peers in my writing community across Canada. I think what nourishes me is the splendor of diversity that we enjoy in contemporary poetry, rather than any privileged handful of books.

16 - What would you like to do that you haven't yet done?
Become sufficiently proficient in CAD software that I could create visual poems of an architectural nature. Visit the Okavango Delta and the mountains of Bhutan.

17 - If you could pick any other occupation to attempt, what would it be? Or, alternately, what do you think you would have ended up doing had you not been a writer?
Architecture or cartography. I like systems that map space—typically, but not always, internal space. I also enjoy the outmoded discourse of psychoanalysis, which is in some ways a spatial paradigm for psychic process. I worry, though, that I would have been lousy at these because I’m not very practical. In truth, I would be likelier to produce speculative architecture, maps of imaginary realms, or parodies of psychoanalytic theory. Or to somehow combine these interests to produce detailed axonometric drawings of sublimation machines, or topographical maps of melancholic fixation.

18 - What made you write, as opposed to doing something else?
I prefer ongoing challenges—things that can exercise me for a while, and have no “correct” solution. Ultimately, many undertakings are of that sort, but I found writing to have the most satisfying array of methodologies, and to be fairly permissive. Breaking rules is fine if the work itself is successful enough, so it’s a good place to tinker.

19 - What was the last great book you read?
I just read the lovely sonic experiment, Thrum by Natalie Simpson; savvy study of grief, M x T by Sina Queyras; haunting dismantling of children’s forms, The Staghead Spoke by Erina Harris, and beautiful taxonomical poetry, Kingdom, Phylum by Adam Dickinson. A few months ago, I also took great pleasure in reading Stephen Greenblatt’s The Swerve, about the recovery of Lucretius’ lost De Rerum Natura by a medieval bookhunter.

20 - What are you currently working on?
I’m working on a few things… A series of centos that address appropriation. Some palindromic experiments. And a book that re-envisions the mythic in order to contest literary politics, the representation of gender, and traumatic experience as fate. This latter has been a difficult process of shedding numerous false starts, and trying to manage the politics of my own writing life. It has also been a struggle to find compelling ways of dismantling representations not just of the powerless feminine, but of the always-instrumental masculine.