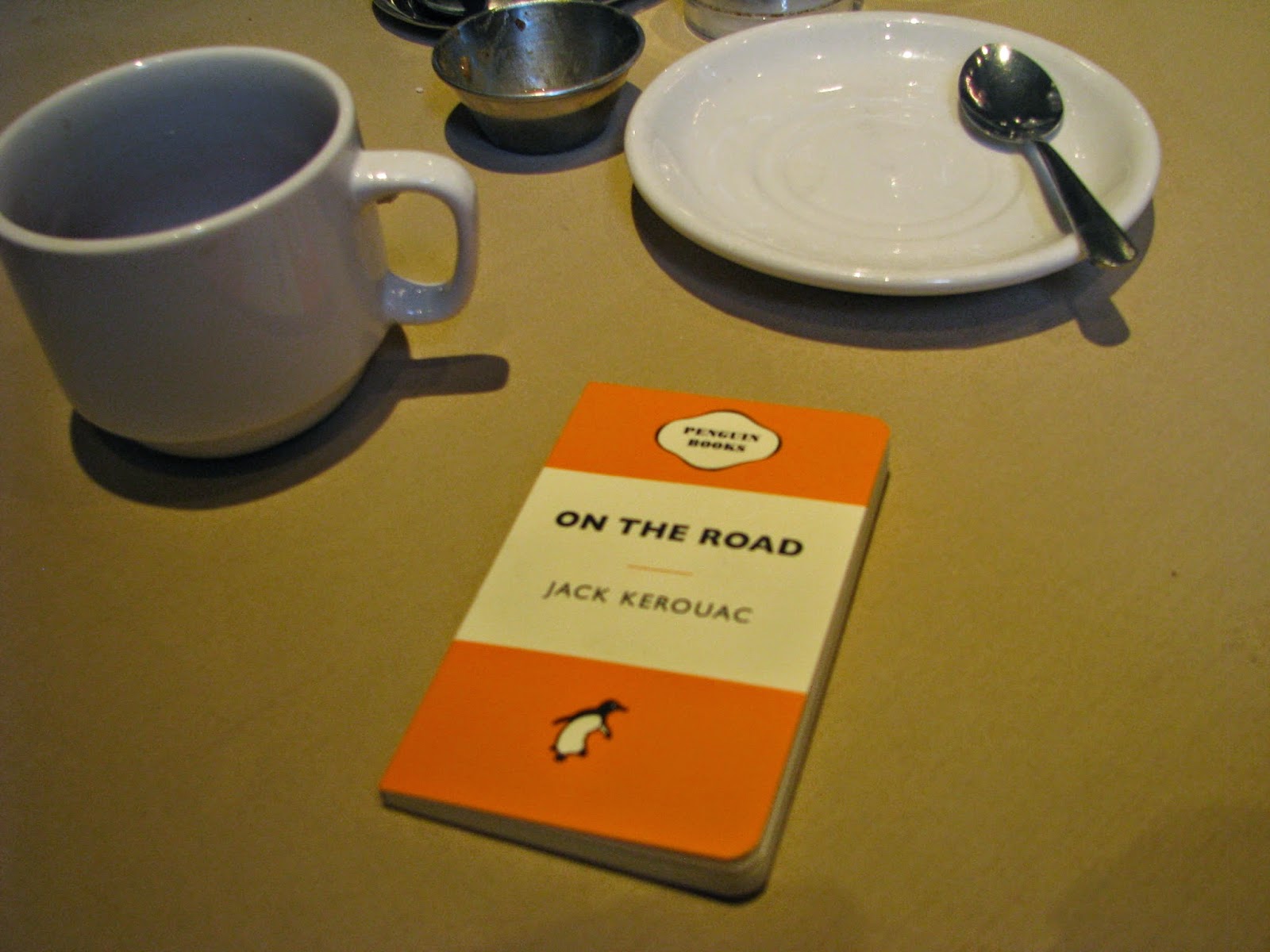 If you were following our updates via Facebook, you'll know that we recently returned from an eleven day driving tour, from Quebec to the Maritimes into New England, driving out to see various folk that we never get to see, before Christine's maternity leave ends in November. What madness! We aimed for no more than four or so hours of daily driving (which didn't always work), and Rose managed to survive the process far better than we might have expected. We aimed driving in the morning and afternoon to her naps, with an hour or two break for lunch, to get her fed and allow her to tear around a bit.

I found a little blank notebook I'd never actually used yet (most likely, I think, a Christmas stocking bit from dear mother-in-law) for the sake of scattered notes, phrases and assorted what-nots.

I took a stack of books to read (never opened), and TONS of material for give-away, handout and otherwise distribution (of course). I sent postcards to my lovely daughter Kate from every stop.

Rose charmed everyone. Waving and smiling even at those who weren't paying attention. 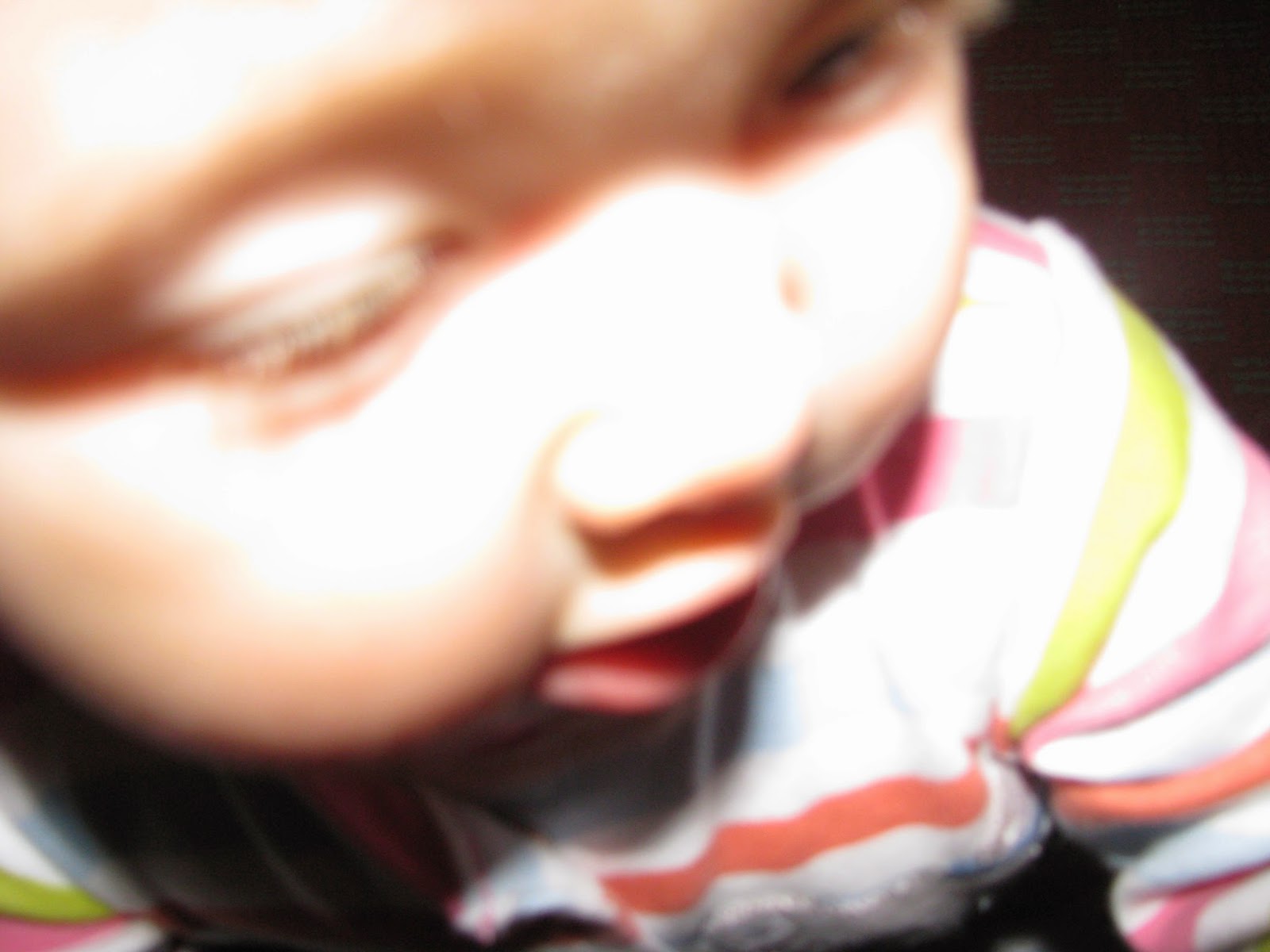 Saturday, September 13, 2014: We drove out to Pointe-Claire, Quebec, a suburb of Montreal where Stephanie Bolster and Patrick Leroux live with their two girls. Can you believe it's been a decade since I was last in their house? That was back when Kate was but thirteen, and Patrick hadn't seen her in a decade. It has been a while since Patrick and I touched base. He's a Franco-Ontarien playwright I went to high school with, and now so rarely see, so the visit with them was really one of my highlights of the trip. Has it really been eighteen years since I produced that first chapbook of hers? Has it really been twenty years since our pal Patrick came home from the Banff Writing Studios and told us he'd met an English poet from Burnaby?

The rain en route to Quebec City was absolutely fierce. It hit and struck and pounded, down. Once landing, Rose made friends before we'd even left the car (she waved at a young couple in a restaurant window, and they happily waved back). We found the most lovely little bed and breakfast, right across from the Chateau Frontenac, where we attempted to calm the baby into sleep. Via YouTube, I presented Rose with her first experience watching Bugs Bunny cartoons. Eventually, we slept. 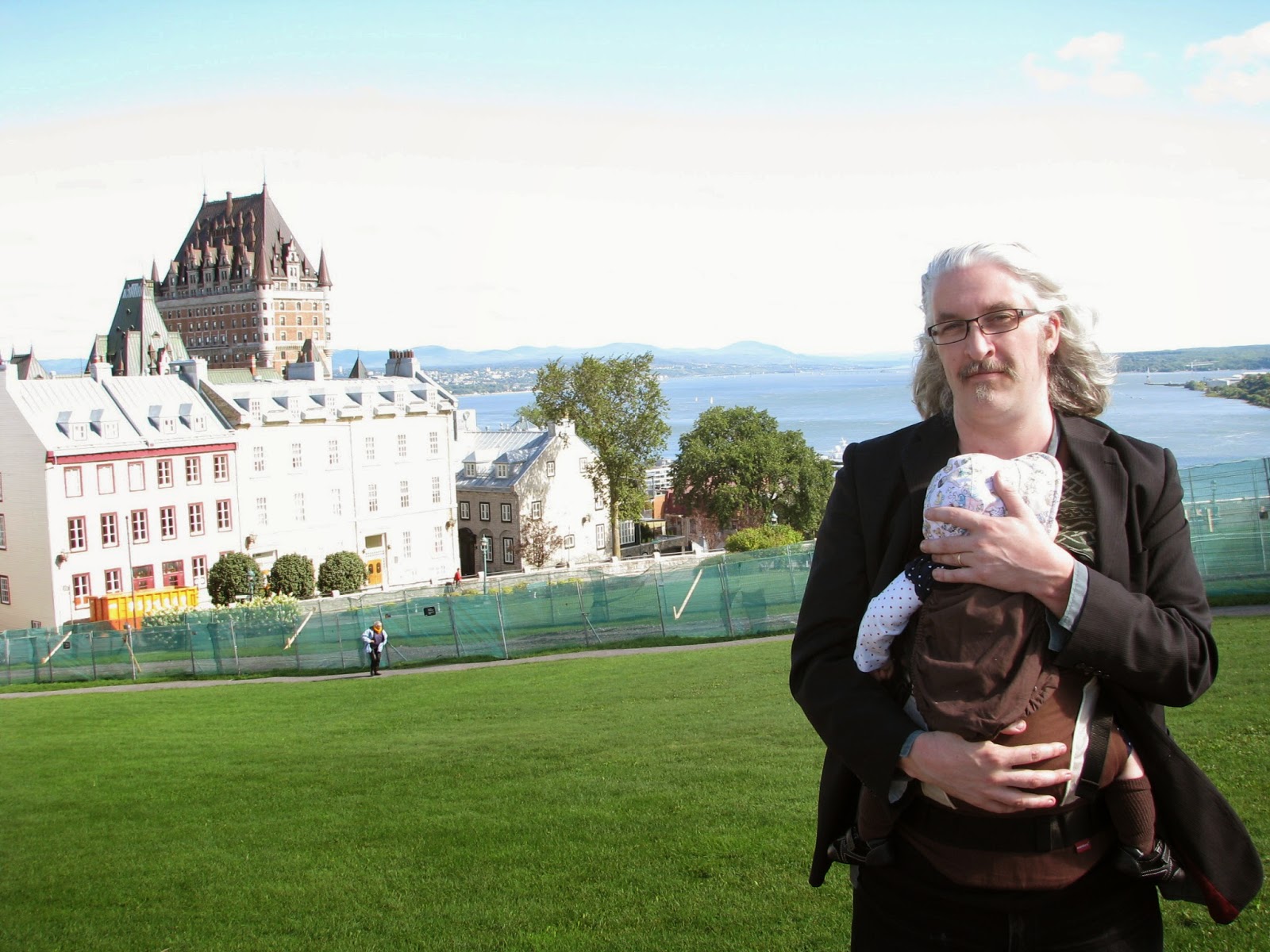 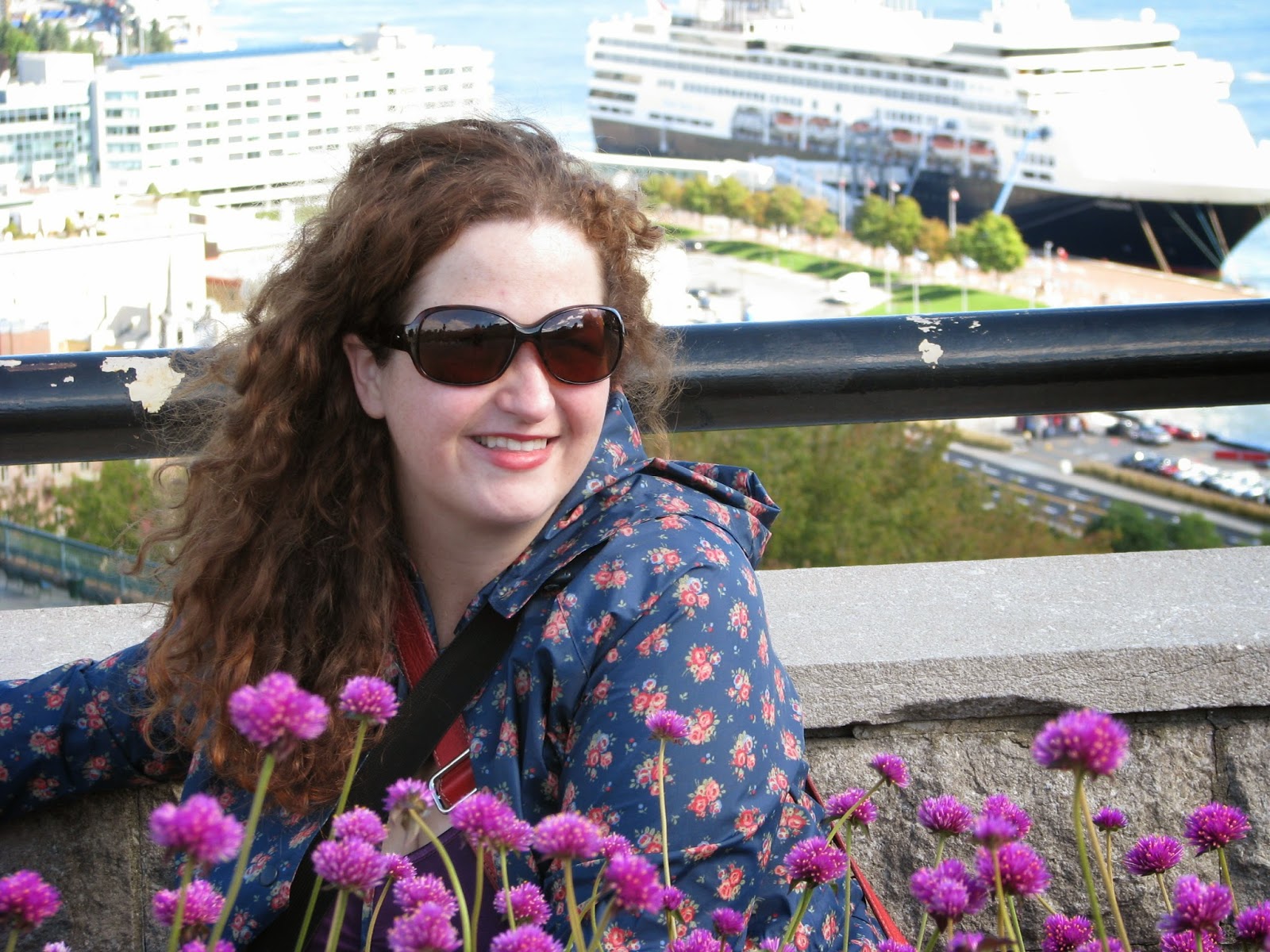 Sunday, September 14, 2014: We wandered a morning and early afternoon of Quebec City. We walked along the walls of the old city, and explored the fort and museum. Oh, what lovely views. Rose, given it was time for such, slept.

The view from the Plains was absolutely breathtaking. And the weather was perfect. Just in case, Christine wore the rain-jacket she'd picked up at the train station in London, en route to Paris, during our honeymoon. 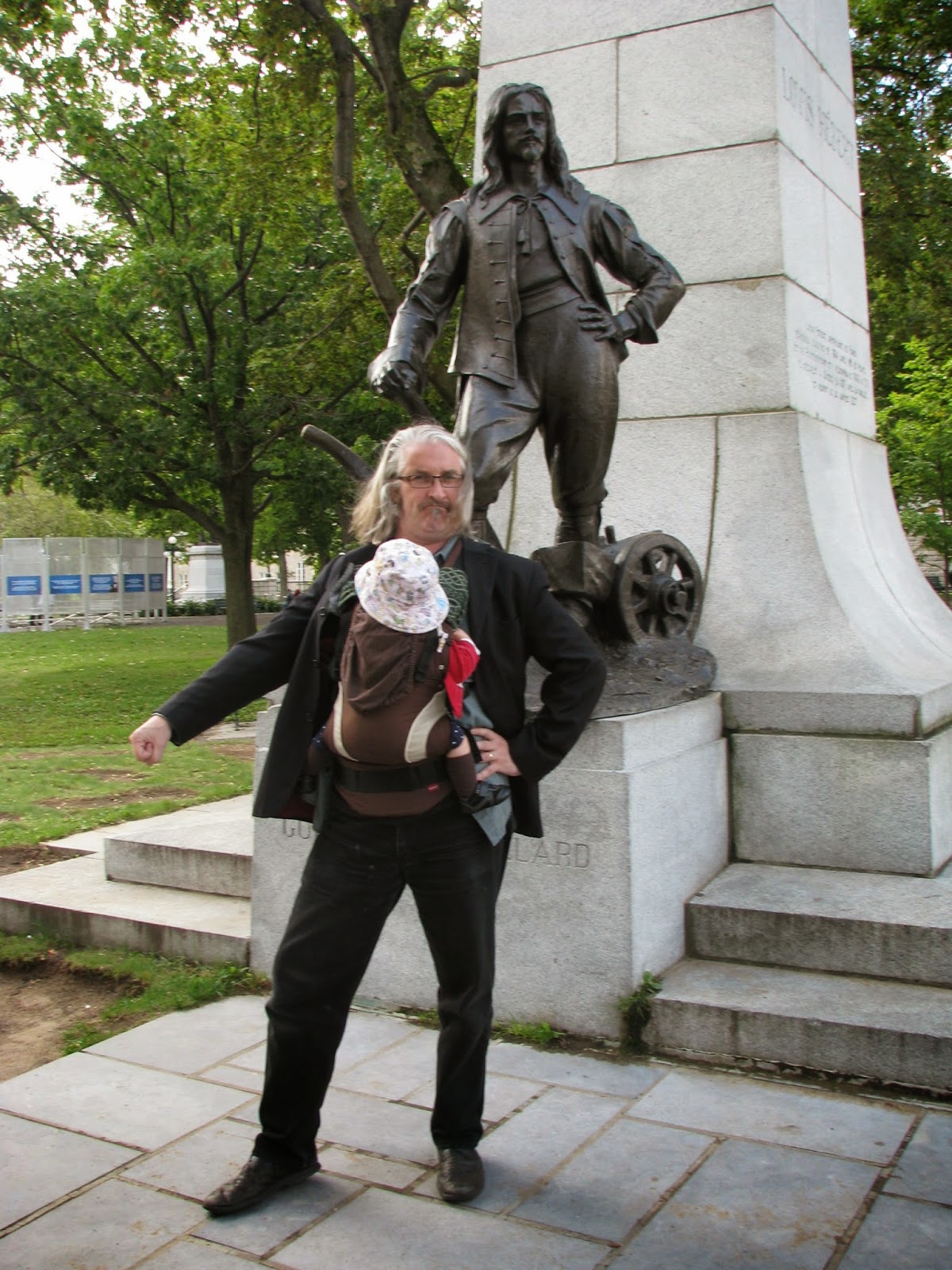 Christine thought I looked far too much like this statue, so (with baby + carrier) had me pose along such. A long distant relative, perhaps?

And of course, tea at the Chateau Frontenac. Or at least, some tea and a cocktail or two. And postcards!

The Basilica in Quebec City appeared to be in the midst of a grand celebration, celebrating an impressive three hundred and fifty years with a video screen showing a brief history, increased security, and a grand door that the faithful can enter (only the seventh door in the world, and the first outside of Europe). It looked quite impressive.

And then we headed towards Edmunston, New Brunswick, knowing the drive would be baby-tolerable, before we continued further east, further. 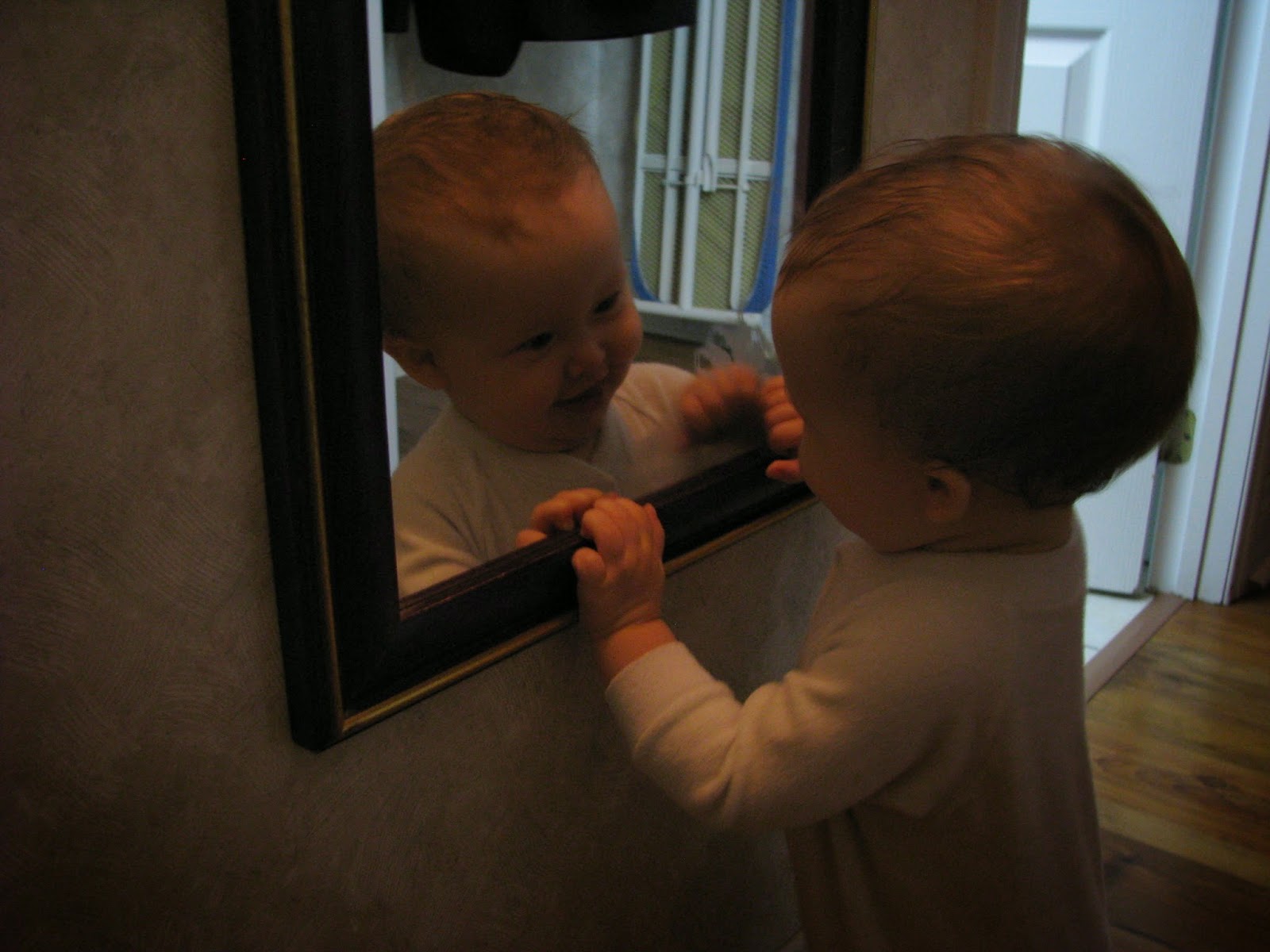 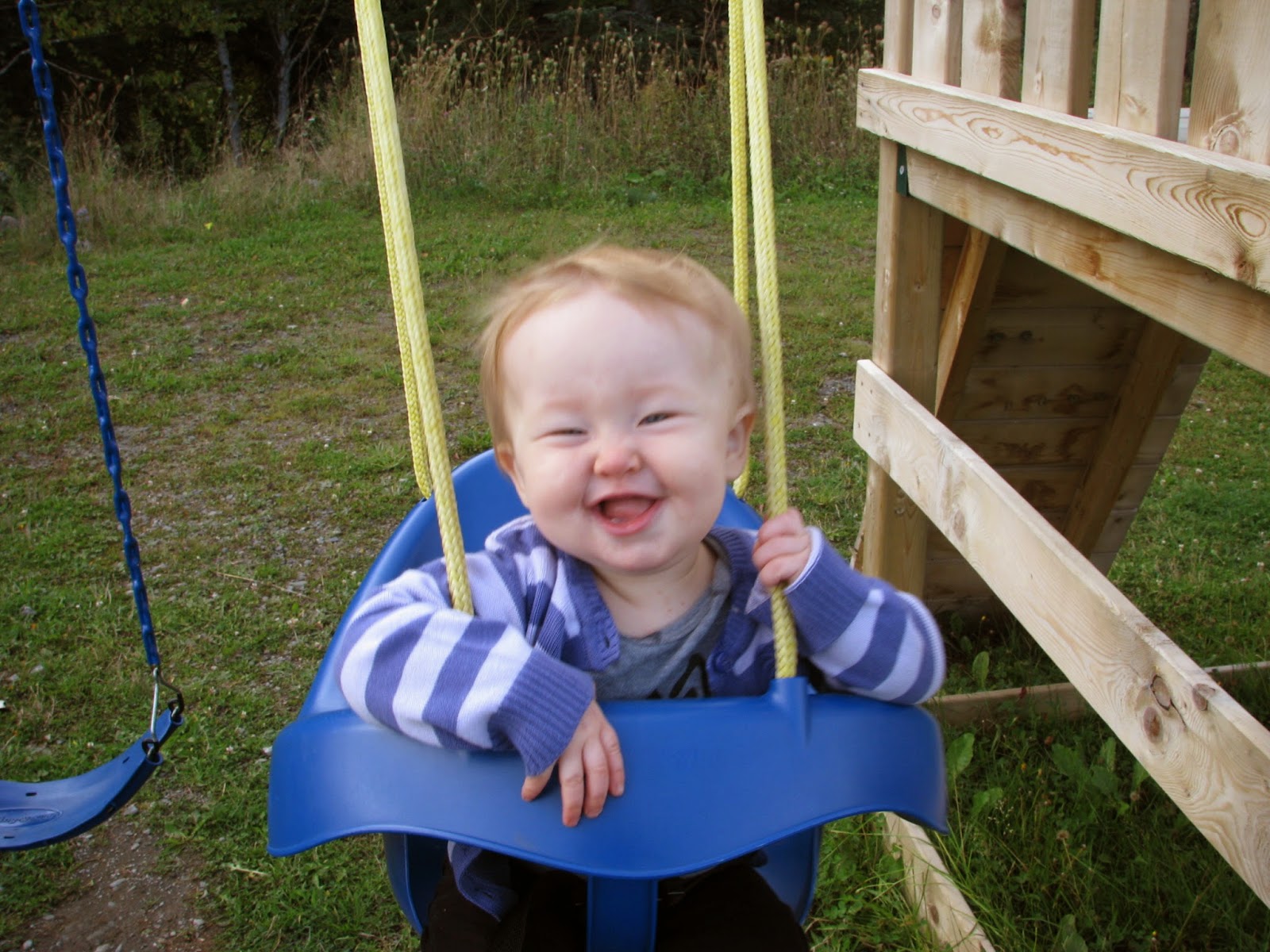 Monday, September 15, 2014: We woke in Edmunston, where Rose and I played on the swings briefly, in the first-thing sparkle of morning mist.

Driving: did you know the longest covered bridge in the world is out here? We wandered over to such, but it was closed for repairs. Still, we took numerous photos of each other out front. And I had shades of recollections of perhaps being through here when I was quite small, a family trip I have yet to ask my father about: were we out here? Did we drive this way then?

Memory can be the most tricky of things.

Inside the bridge, where we saw workers working, welding and what-not. We could not cross (at least, by car). 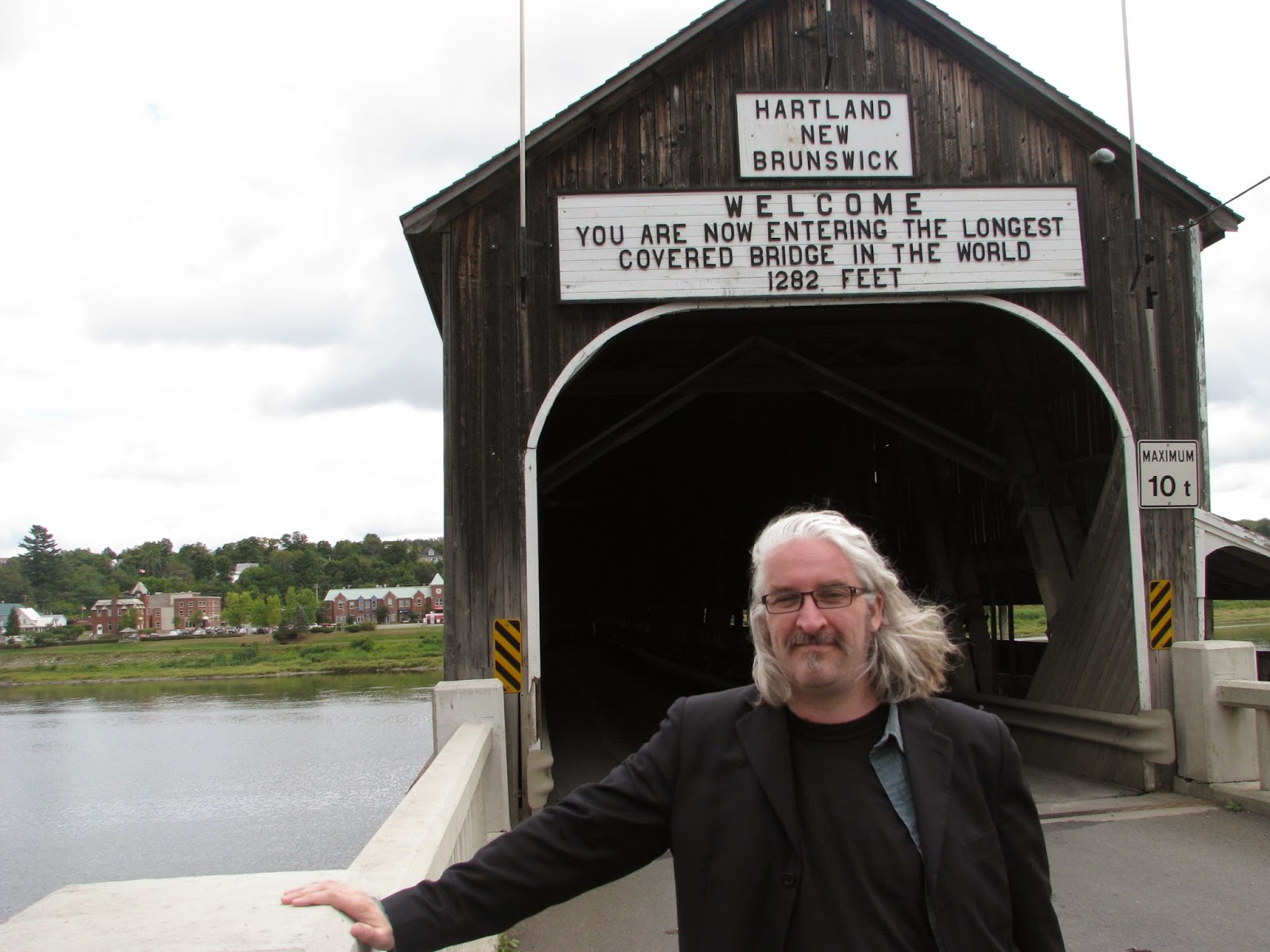 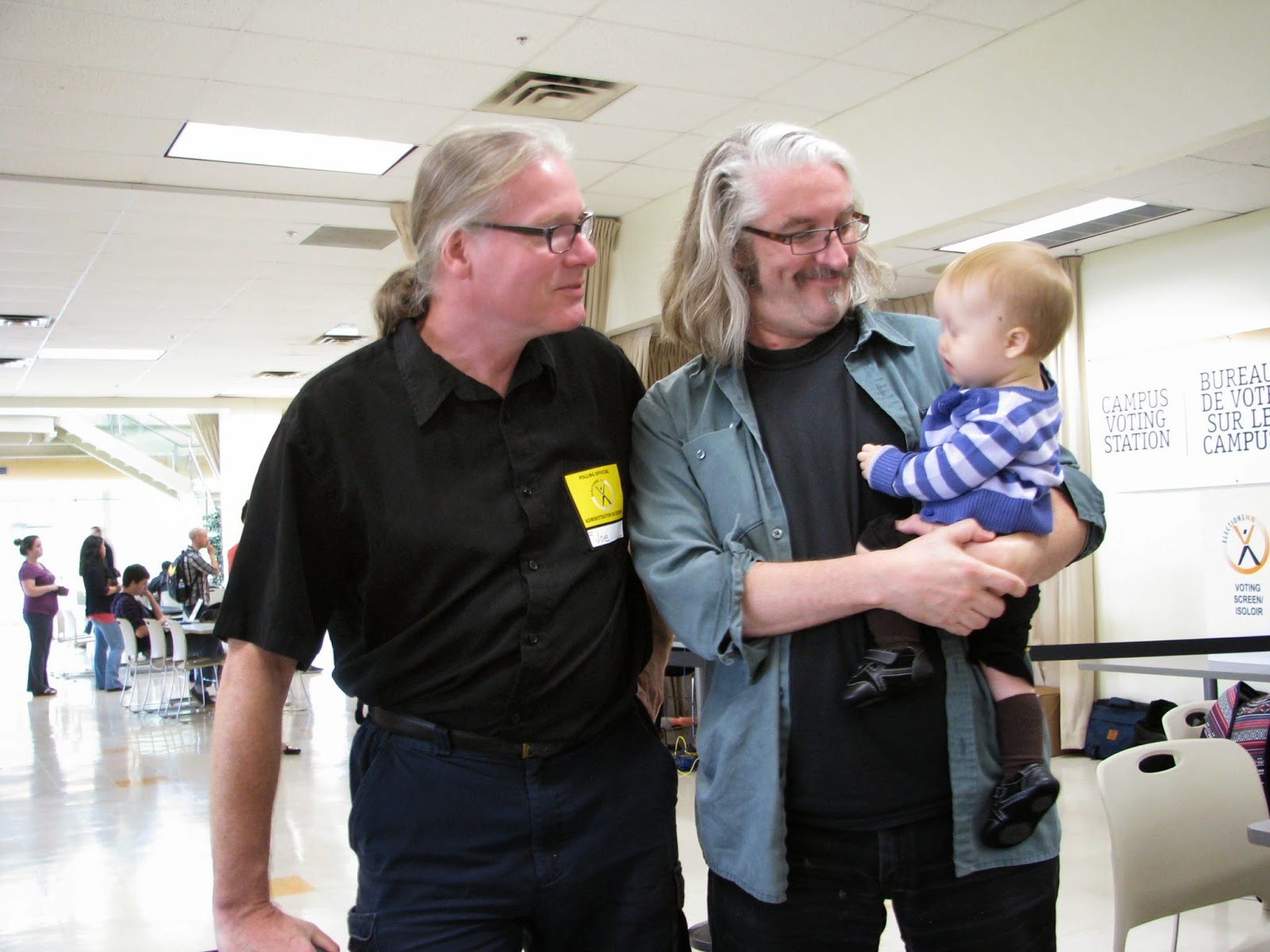 We were heading for Fredericton, where we had lunch with Broken Jaw Press editor/publisher and Chaudiere Books author Joe Blades, who was working part of the election. It was good to see him, and pass along some publications for him to distribute around his immediate local. It had been possibly half a decade since I'd seen him last.

I will say it now: parking at the University of New Brunswick is stupid. 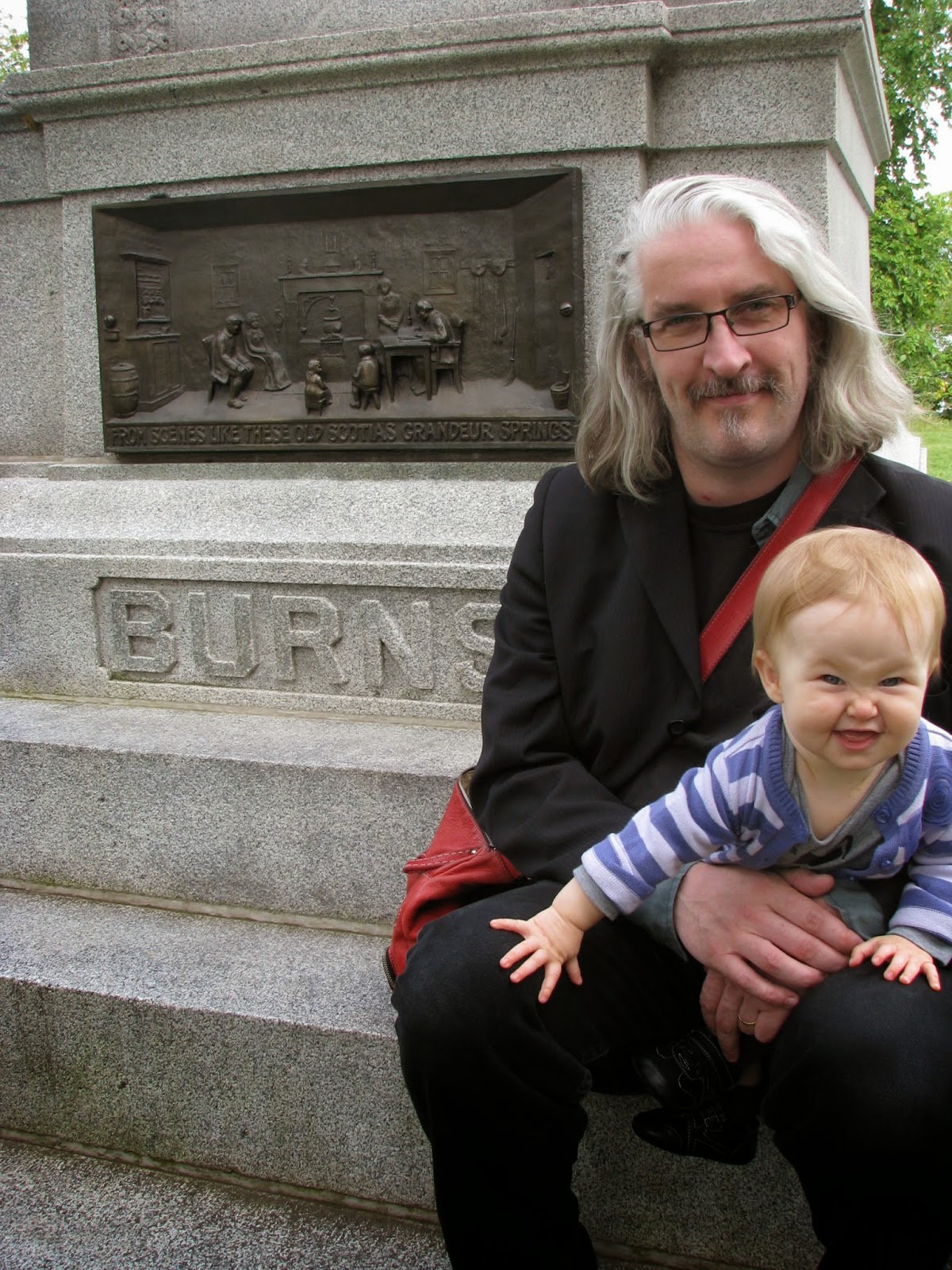 Visiting Joe was quite nice. It had been too long. And, before he returned to work, he offered us passes to the Beaverbrook Gallery, a space I'd long heard of but never actually seen. We were fortunate: summer hours still existed, otherwise it would have been closed on Mondays.

I had expected it, somehow, to be bigger. But some of the artwork inside was incredible.

Rose and I, of course, had a brief photo-shoot at the Robbie Burns statue outside. We allowed Rose to burn off some energy by rolling around in the grass (she is still very uncertain of lawns and grass, somehow) before we returned her to carseat, and was reminded of how we disappoint her in so many, many ways.

We kept driving. Rose fell asleep. We made the hour or two to Saint John, New Brunswick, where we visited Christine's friend Anne, who lives in the most lovely apartment downtown. 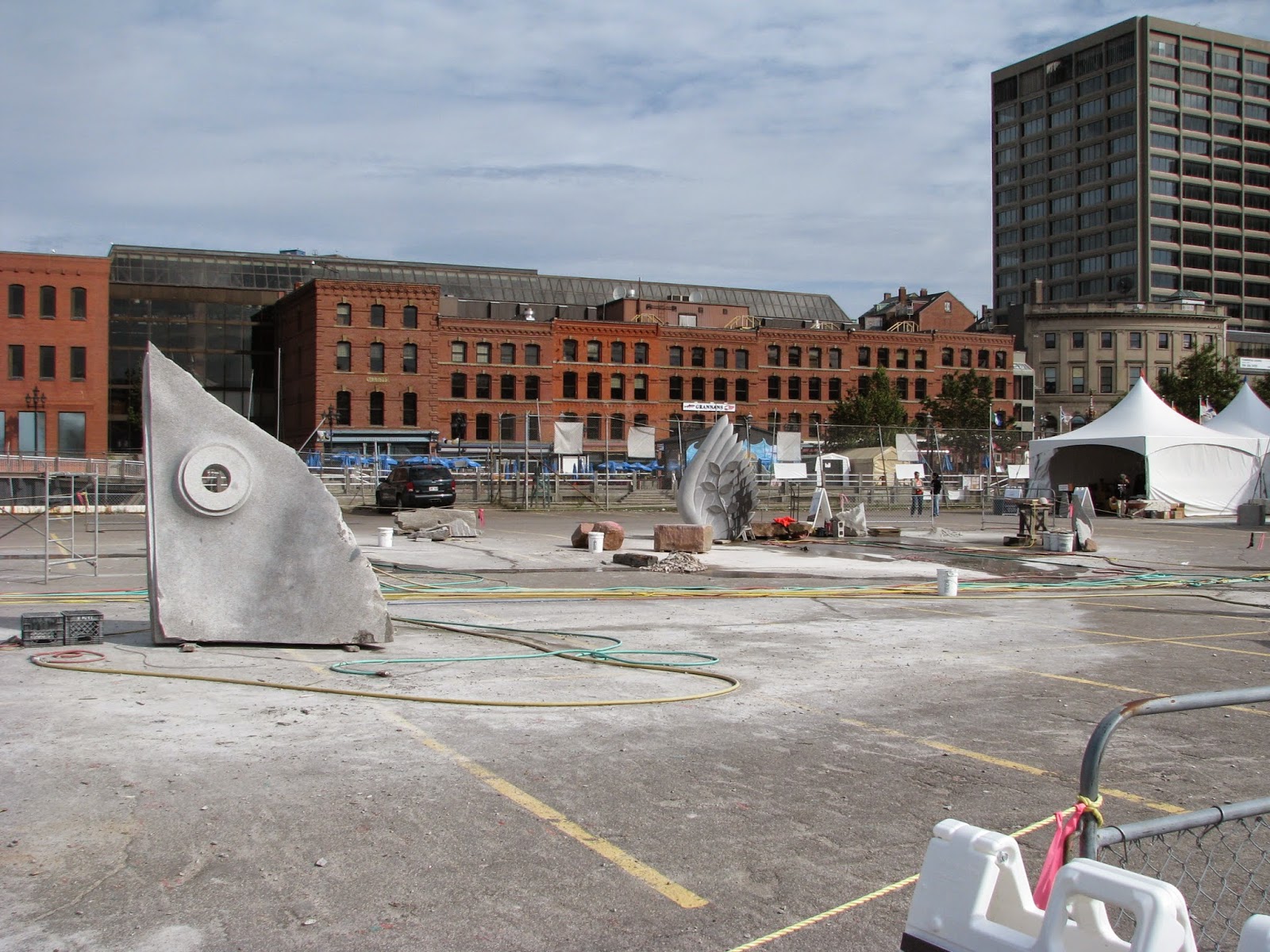 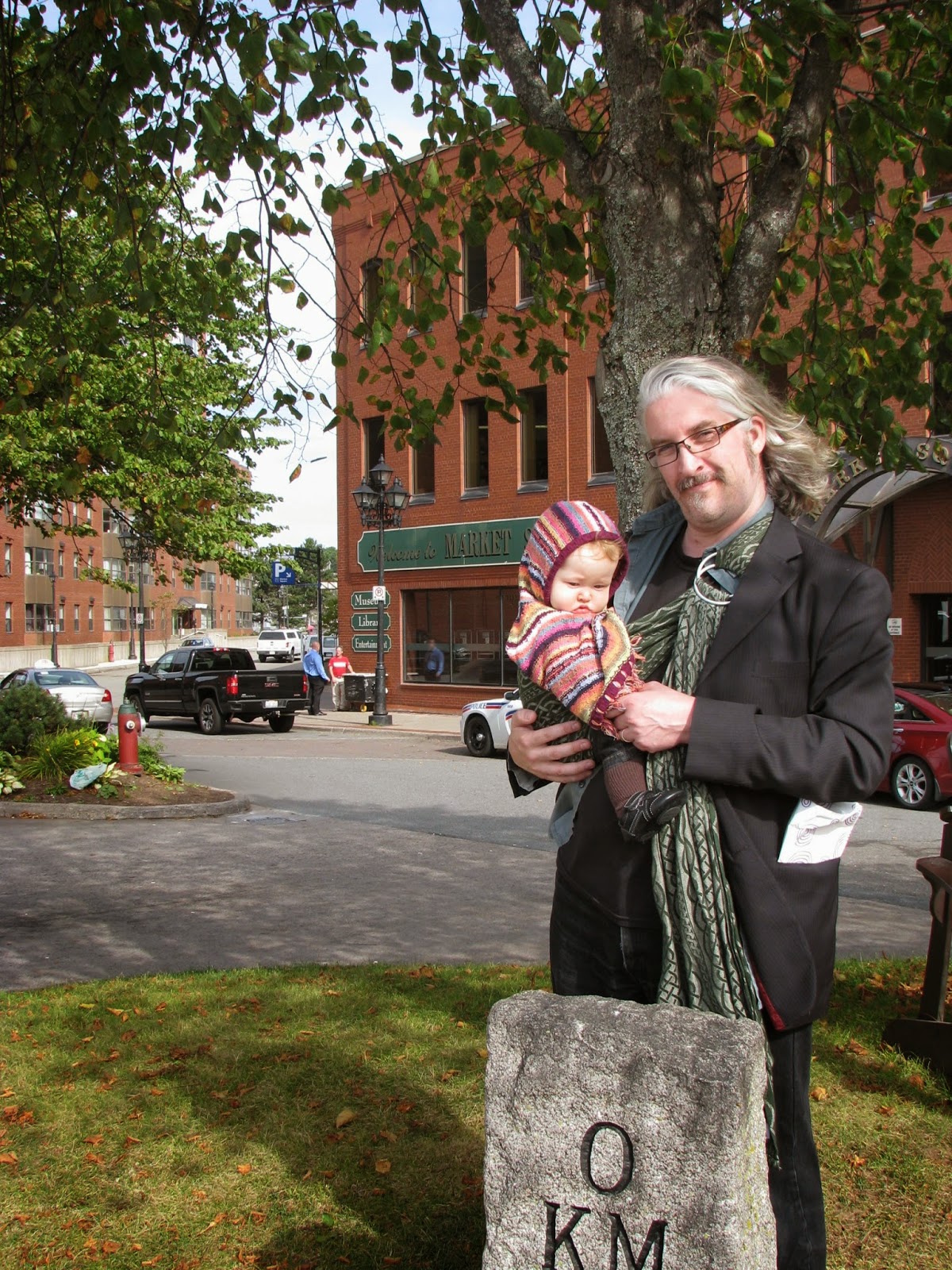 The water, the water. I think Christine had missed the ocean, tucked so long away in the Ottawa Valley.

Rose cranked slightly, so we moved a bit quicker, for the sake of a possible nap.

We saw a kilometre-marker, which I haven't yet looked up.

Andy Weaver was born in Saint John. I sent him a postcard: Everyone here looks like you.

Next: Parrsboro, Moncton and Wolfville...